The Horses Made it to Minnesota 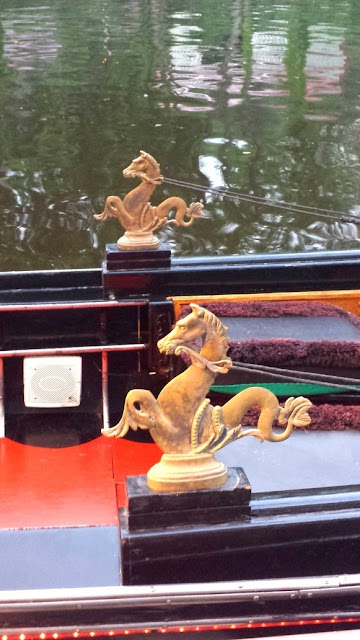 Somebody sat on one of John's cavalli!
Can you believe it?
And then after they sat on it, the top half of the unit broke off and fell into the St. Croix river!  Thus leaving John's boat with one brass horse, and the broken-off base of another.
Of course he had to remove them both - and a Venetian gondola without cavalli just doesn't look right.
It's like a camp without a fire,
a fig without a newton,
the sky without a sun!
Something had to be done.
Over the years I've been collecting gondola parts - some have come off of decommissioned boats of my own, others came from friends.
I call it the "parecio bank".
My wife: not a fan, as it means having lots more stuff than we should probably have sitting around.
"Parecio" is the catch-all term for decorative and removable parts of a gondola.
The idea being that sooner or later someone would need something.
In Minnesota, that "sooner or later" came when some guy sat on one
of John's cavalli.
John Kerschbaum of Gondola Romantica called me and shared his frustrating tale, and behold, my hoarding ways were vindicated, justified!
I jumped for joy.
John jumped too.
It turned out that a while ago my friend Joe Gibbons in Boston had been cleaning up for a move and (possibly at the encouragement of his wife)
sent me a few boxes of gondola related things. amongst it all, there were two nice, well-aged cavalli. They were the perfect answer to John's problem.
Of course they had to be blessed first.
I brought them to the most recent get-together at Sunset Gondola and we passed them around, someone spilled a little red wine on them, and lots of positive energy (and a few playful insults and idle threats) were sent to Minnesota.
"Sunset to Mothers 3 - Fondling the Cavalli"
Now John's boat is no longer naked,
the existence of my "parecio bank" has been justified,
and there's a pair of cavalli in Minnesota with a very interesting story to tell.
My wife is still not totally convinced, but she is happy to have a little more space now behind the TV.
Posted by Gondola Greg at 3:53 PM