Sunset to Mothers 5 - Rowing and Singing 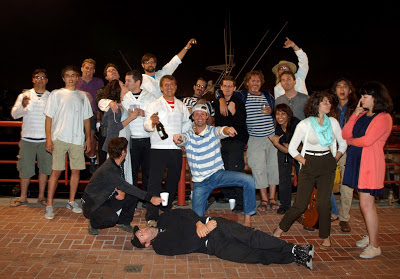 Get-togethers at Sunset Gondola are each unique and different,
but they tend to have some standard traditions.
We do many things the same way each time,
or at least approach them in the same way.

As I explained to someone who was participating for the first time - the traditions at the get-togethers started with someone saying
"Hey, this will be fun, let's do it this way".
The next time someone else would say
"We did it that way last time and it was great",
and so traditions were born.

After the food and fellowship that takes place near the office, we always take a few "group shots" with the camera on a timer (like the one above), then we board the boats and head out into the harbor.

Along the rowing route, all the boats congregate beneath one particular bridge and folks take turns singing.

This time around I didn't snap any photos during the rowing portion, but I managed to get a few video recordings.  Because it was dark, these recordings don't show much (except how shaky my camera hand can be while rowing),
but if you close your eyes you can imagine being there.

This first clip began while we were still approaching the bridge, so the singing volume begins at low volume.

The singer is Stefano - who is classically trained and it shows.

Santa Lucia
I was lucky to have Andrew McHardy on my gondola.
He tuned up his ukulele and graced us with this - an old familiar song
from an unlikely source.
The song: "Rainbow Connection",
sung originally by Kermit the Frog, in the Muppet Movie.
I liked Kermit's version, but I think I liked Andrew's better.
Rainbow Connection
Next, someone (I think Nico) broke out this classic,
which echoed nicely beneath the bridge.
Change Gonna Come
You never really know who's gonna show up at these get-togethers.
You never know what they'll sing.
And one guy (Cully) brought a clarinet, and amazed us all.
This is one guy, sitting in a boat, with his friend on guitar.
When he's not "clarinetting" he's singing.
I will not be surprised if we see him on stage or TV one day.
Exactly Like You
Some folks prepare extensively for these under-the-bridge sessions,
others just go for it,
either way it's amazing.
I wish I'd had more battery and better control of the camera,
because there were many more performances that night.
Posted by Gondola Greg at 10:30 PM