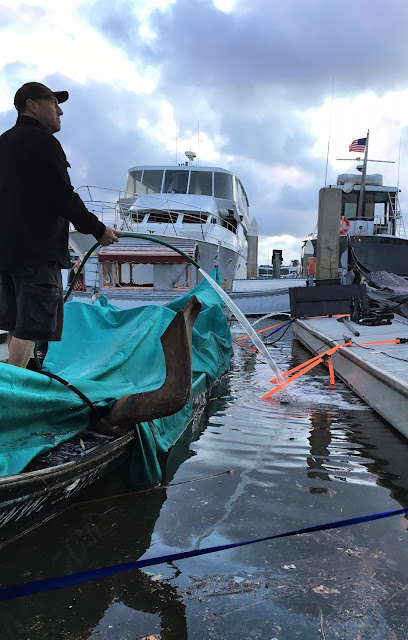 Yesterday I professed my undying affection
for a wonderful device known as the sump pump.

I spent plenty of time pumping out boats,
and then placing a "Stella system" on each boat,
so I could sleep through the night.

Well, I slept.  Slept through more rain, and even hail.
When I arrived, I was reminded that "Murphy" might as well be
my middle name.
I pumped out fifteen boats yesterday.
This morning, fourteen of them were still floating on the surface.

But then there was Stella.
She had a battery that didn't fulfill it's duties,
and was summarily baptized in salt water. 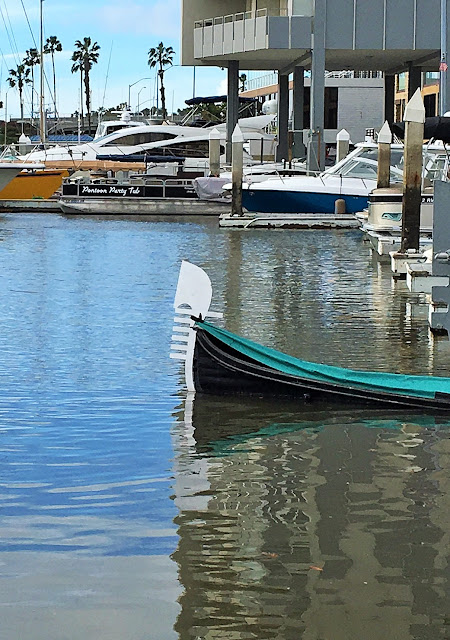 No, the irony is not lost on me.
The very boat that I chose to use when I named the "Stella system",
was the one that had tried to make a mad dash for the bottom of the bay.

She failed, of course, because Venetian boats are made of wood.
But there she sat, a lowrider gondola.

If gondolas could speak, this one would be saying:
"you haven't given me enough attention lately,
but today I made sure that you would." 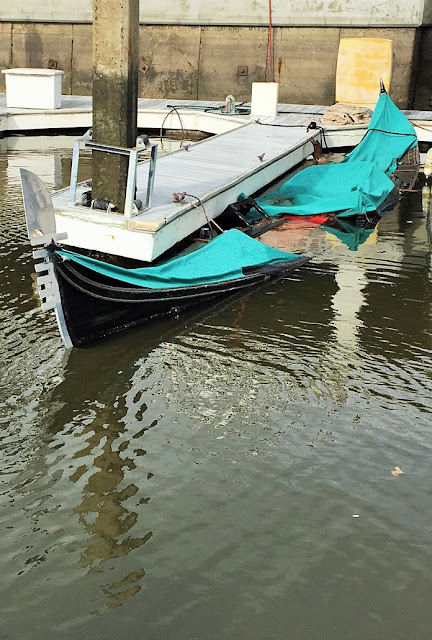 My friend Matt and I had stopped by the docks
to just clean a few things up.
But then...your plans don't always
work out the way you thought they would.
I told Matt that our "plans" had changed,
and we went about the business of reviving Stella.
This wasn't the first time we'd done this.
In fact, we've dealt with submerged gondolas several times before.
Some have been on purpose - to soak the wood.
Some have been on accident (even though not always admittedly so).
We started by pulling the other boat out of the slip,
so Stella was alone, and we could give her all the attention she needed. 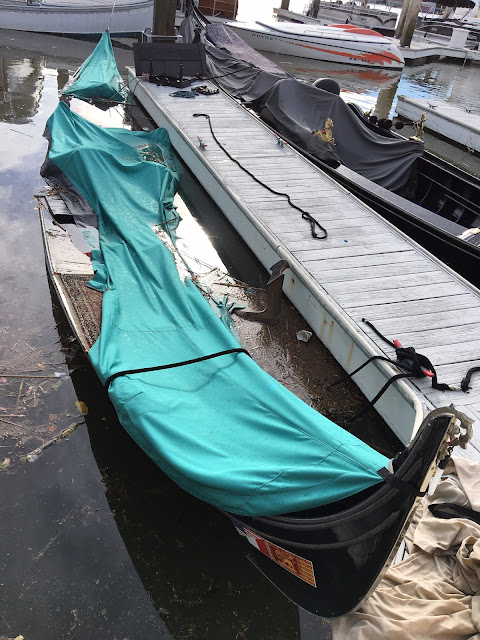 Next, we ran a few ratcheting tie-straps across the slip.
These are the same tie-straps I like to use to secure a boat to my trailer.
we attached them to opposing cleats - using extensions of rope
to make the stretch. 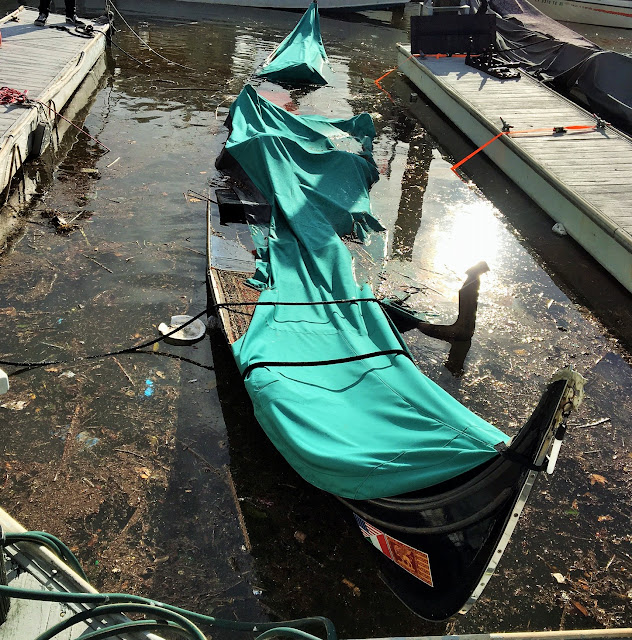 The gondola was moved into the center of the slip.
Each tie-strap ran under the boat.
In all we set up five of them.
As we tightened the straps, the rails of the boat rose above the water. 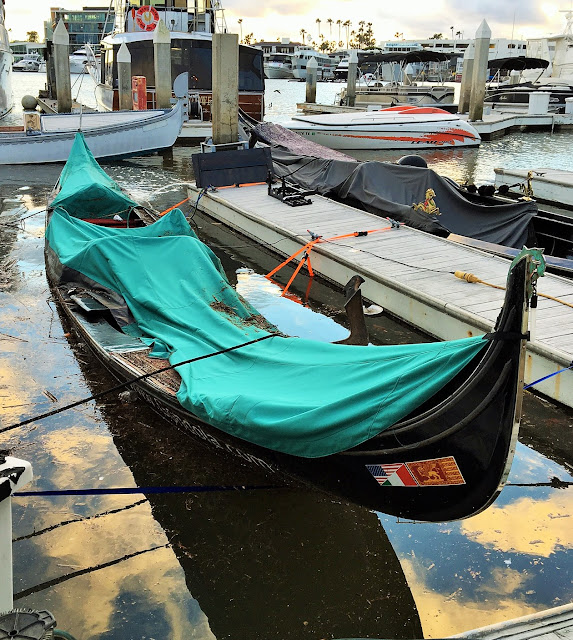 As Stella lifted, we ratcheted the tie-straps a few clicks
every five minutes or so, thus helping the process,
and preventing the boat from "whaling over".
Once that was accomplished, I tossed my trusty sump pump in the boat
and began the process of pulling out the water within her. 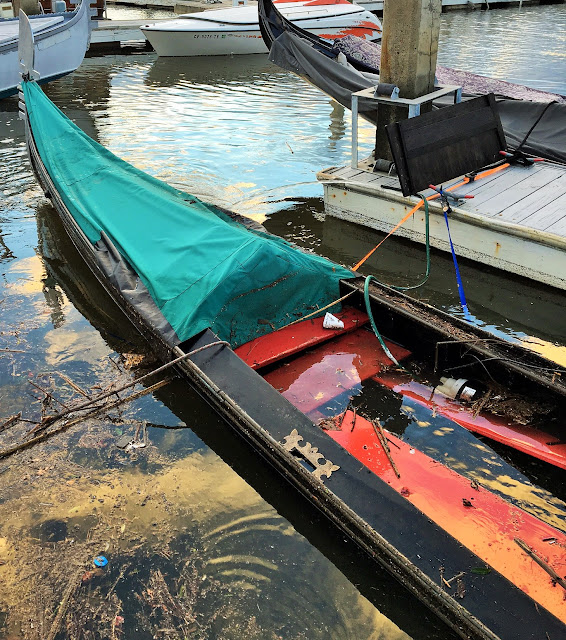 Twenty minutes later we'd lifted the rails
a comfortable distance from the surface.
We were beginning to win our battle with the waters of the Pacific. 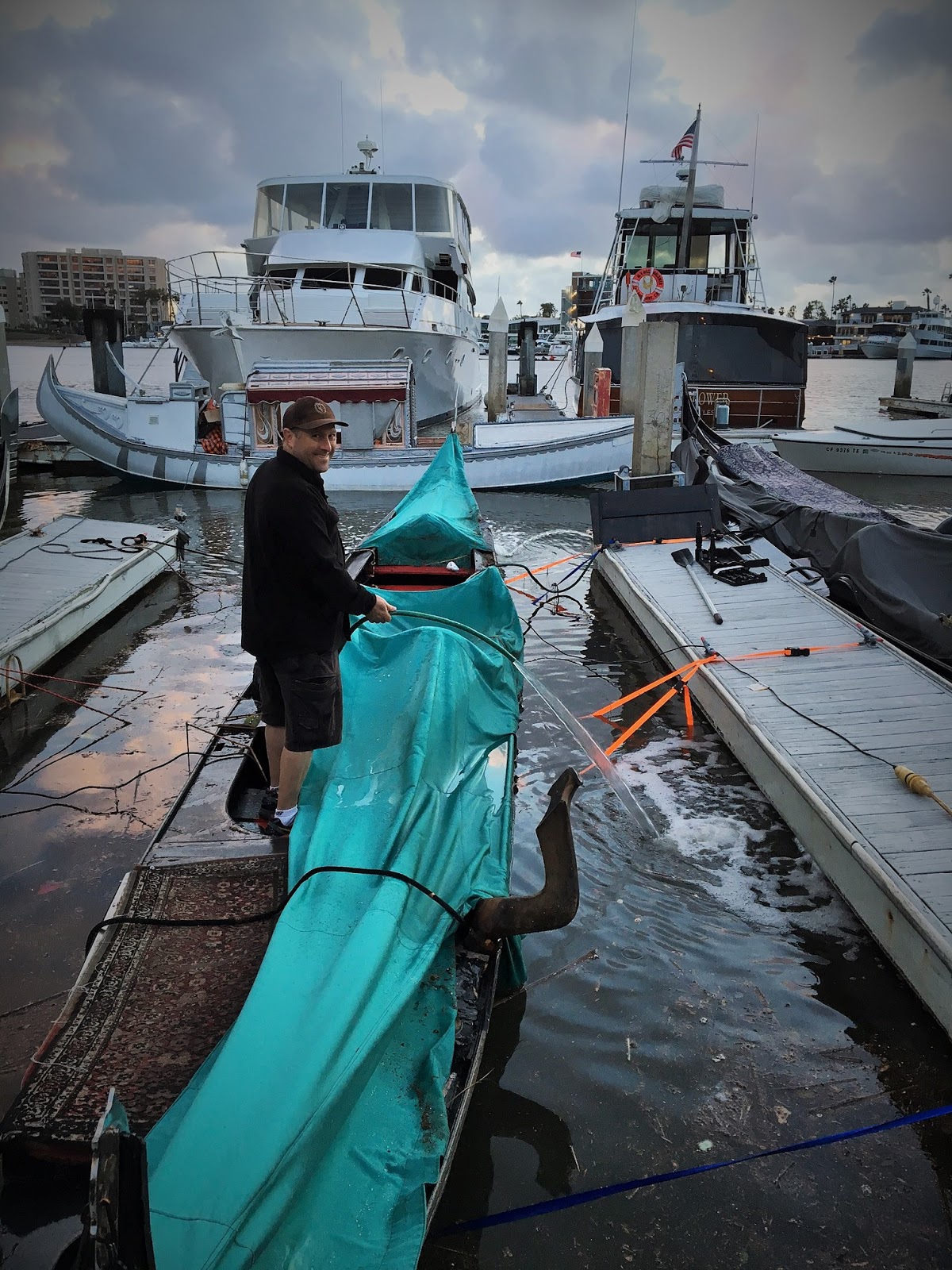 photo by Matt Kilgore
Next, I stepped onto the back of the gondola
and plugged in a second sump pump. 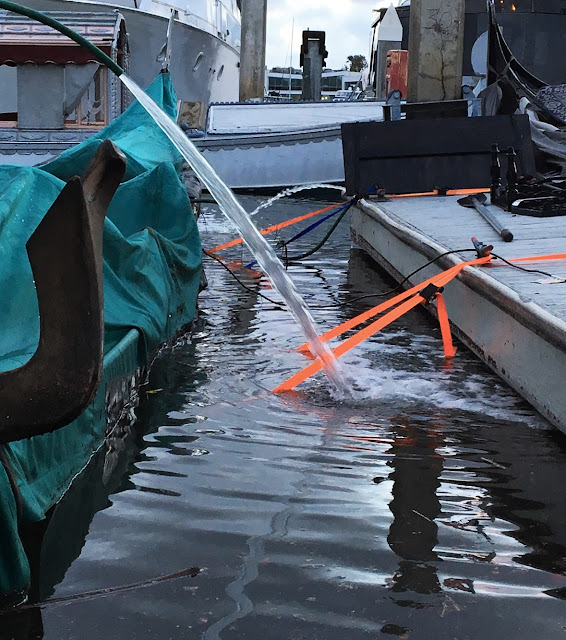 About an hour later, Matt and I were going compartment to compartment, drawing the last bit of water out of the gondola. 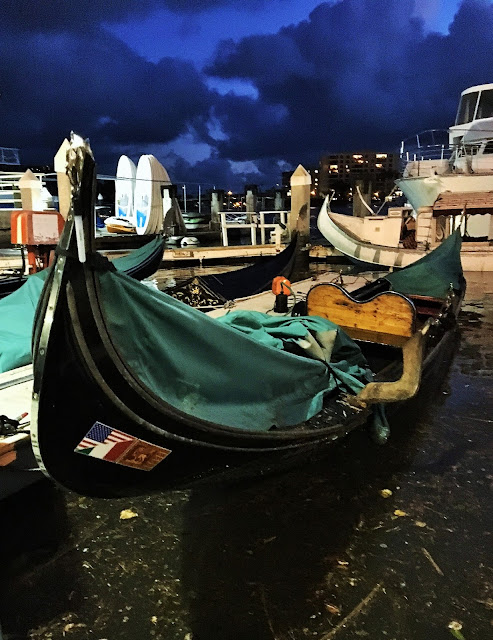 And there she was, floating on the surface once again.
The sun had set and the cool of the night had crept in,
but in a little over an hour, we'd won the battle for positive buoyancy.
Two guys,
a handful of tie-straps,
two sump pumps,
and some determination.
The "Tie-Strap Trick".
_________________
Next time you find yourself doing this,
consult my post "Top Ten - Swamped Boat" list of excuses
to use with annoying inquisitors.
Also, see my 2008 post "Raising My Own Titanic"
and "Bad Things Happen - Part 1 - Smashing, Burning, and Sinking"
Posted by Gondola Greg at 10:00 PM