Let Me Tell You Sump'in 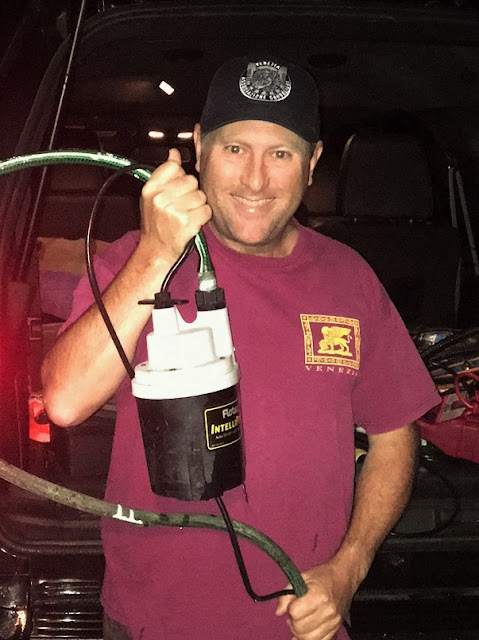 After years and years of living in drought conditions, Southern California
is enjoying some major relief in the form of rain - LOTS of rain.

And while I know we need it, it's not always soothing.
As I sit here typing, I can hear the clatter of strong rainfall
as it hits the roof and the sides of the house.

Second, it reminds me that I'll be doing more of the same tomorrow morning.

Third, it reminds me of the summer of '89, when I lived in Nome, Alaska.
We liked to joke that we had two seasons up there - frozen and wet.
But Mother Nature really took us to task that year.
I think we only had about five days all summer when it wasn't pouring down relentlessly.

As a rule, I like to have a bilge pump and a battery set up on each boat
(you can read more about it in my post "The Stella System").
But after so many storms, I found that many of my batteries were either discharged or no longer functioning.

Enter the sump pump.
This is not something I picked up at the local boating store.
It's a hardware store item.
The sump pump is mostly popular with folks who have flooded basements,
but when the rain gets serious, I reach for one too.

The one I got to spend so much quality time with today is a Flotec "Intellipump" model that boasts a 1/4 horsepower motor that will blow standing water out of a boat at 1,790 gallons per hour.
They retail at about $145, plus the hose.
If you don't either step on or tie down the end,
it'll shoot all over the place like a firehose. 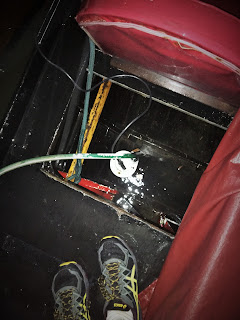 The sump pump doing it's thing down in the bilge. 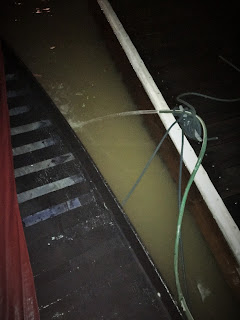 A well-secured hose is imperative
(unless you want it shooting back into the boat)
Just to clarify, I'm not really a fan of running around in the rain
with pumps and hoses and such, but when the rain falls,
it's good to have the right tools for the job.
And the sump pump is, well, she's "sump'in special".
(sorry, I just couldn't resist the pun)
Posted by Gondola Greg at 11:00 PM