photos and story by John Synco

On Wednesday, April 29th, something pretty awesome happened
up in the Pacific Northwest.  I wasn't able to be there, but thankfully,
John Synco was.
Here, in his own remarkable words, is what happened:


Gearing up for a ferry ride is still exciting even after nearly four years.
It's loud and bumpy, but the view during the day is magnificent.

Today was just a little extra special of a crossing for me.
Today mixed a bit of my past with a future I'm fighting to make real.
I found myself keeping close attention to the elements knowing I was on my way to witness Mark Schooling test row an American-made batela.

While my wife and daughter played with the new addition to our family,
a four-month-old border collie, I sat quietly staring off the port side
of the Walla Walla.

Each time I see the water on the Puget Sound I day dream about a time
when I will be lucky enough to crash through the small swells with the bow
of a Venetian boat. Today the water looked inviting.
I was just hoping the conditions were going to be even better for Mark.


I took notice of the shade of gray darkening above our heads the closer
we got to our destination, but upon our arrival at the NorthwestSchool of Wooden Boat Building in Port Hadlock, WA. the skies had cleared as if the sun itself wanted to see if this boat would float.


Port Hadlock is a great little town just about nine miles south
of Port Townsend. The school is nestled on the southwestern
shore of Port Townsend Bay.


Standing on the sandy beach near the old boat launch you see a small dock,
a few sail boats moored out in the distance and a wall of green trees staring back at you from the other side of the bay.


It was quiet enough to hear the birds,
chilly enough to wear a light jacket
and beautiful enough to stay forever.


My first glimpse of the batela was from outside of the wood shop where she sat, perched up on wooden boxes.
When I usually enter a building I take notice of my surroundings.
Not this time - I couldn't take my eyes off of the boat.
I have no idea if I missed out on anything else in that shop. 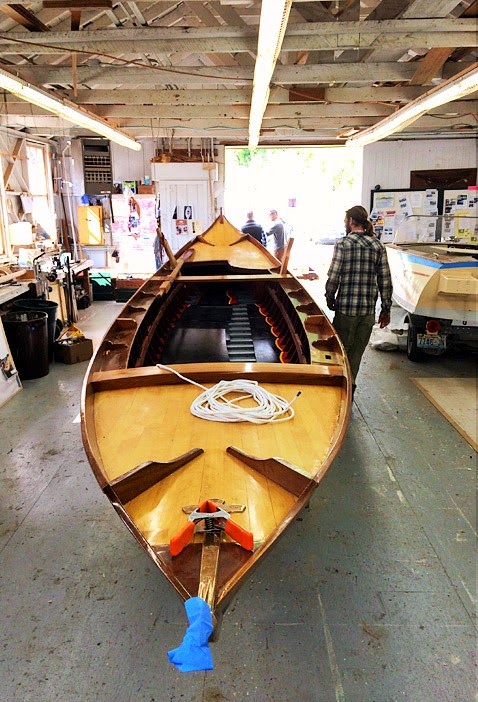 She was gorgeous and I wanted to take in every curve,
every plank and every grain I could. 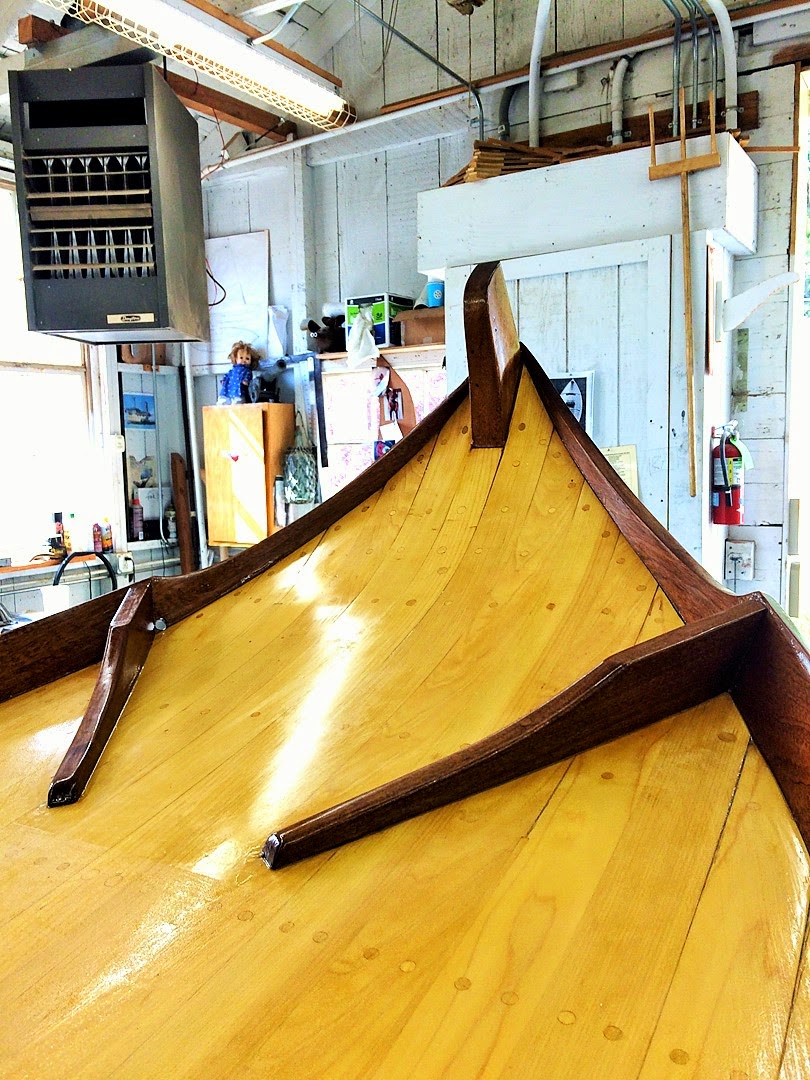 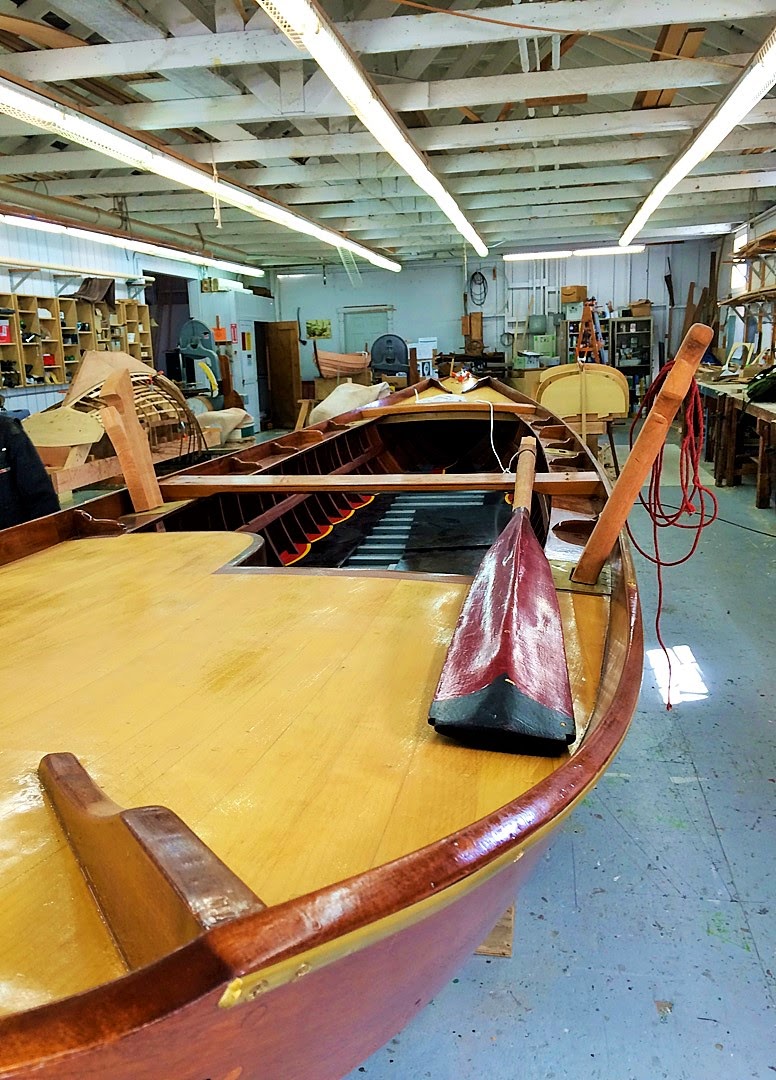 As I stood there in awe I noticed more and more people arriving.
I believe they were all current and past students of the school. 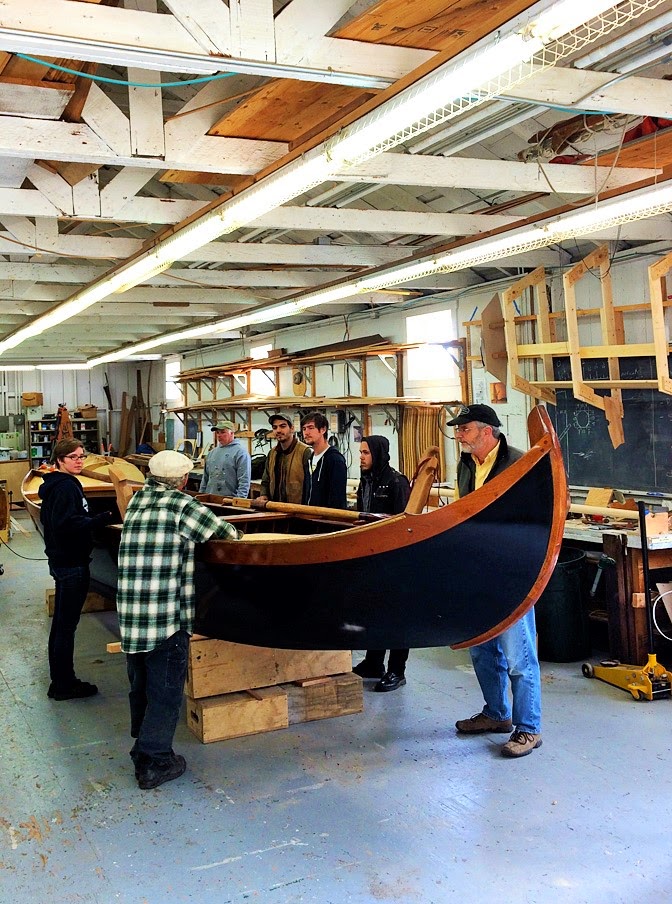 
I was able to strike up a conversation with one of the students that helped build her. He showed me the plans they had to work with and explained some of the challenges they had to work through. I couldn't get enough.
I would have stood there and listened to the story of every student. 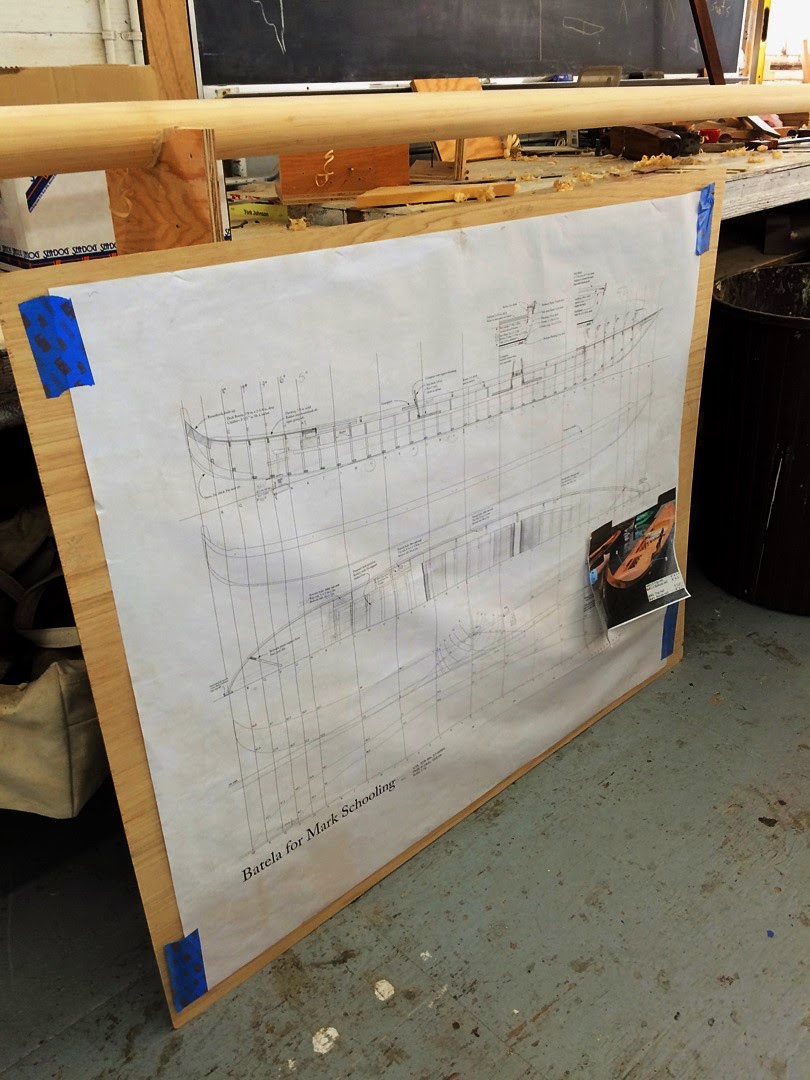 The time came to haul her out and roll her in to the water, so I walked outside and found Mark Schooling strolling up the street dressed as a gondolier. I smiled and felt lucky to be there on a day so special to him.


We said hi and briefly caught up, but then the boat came flying out of the shop on the hands of a lot of people who made this day possible. 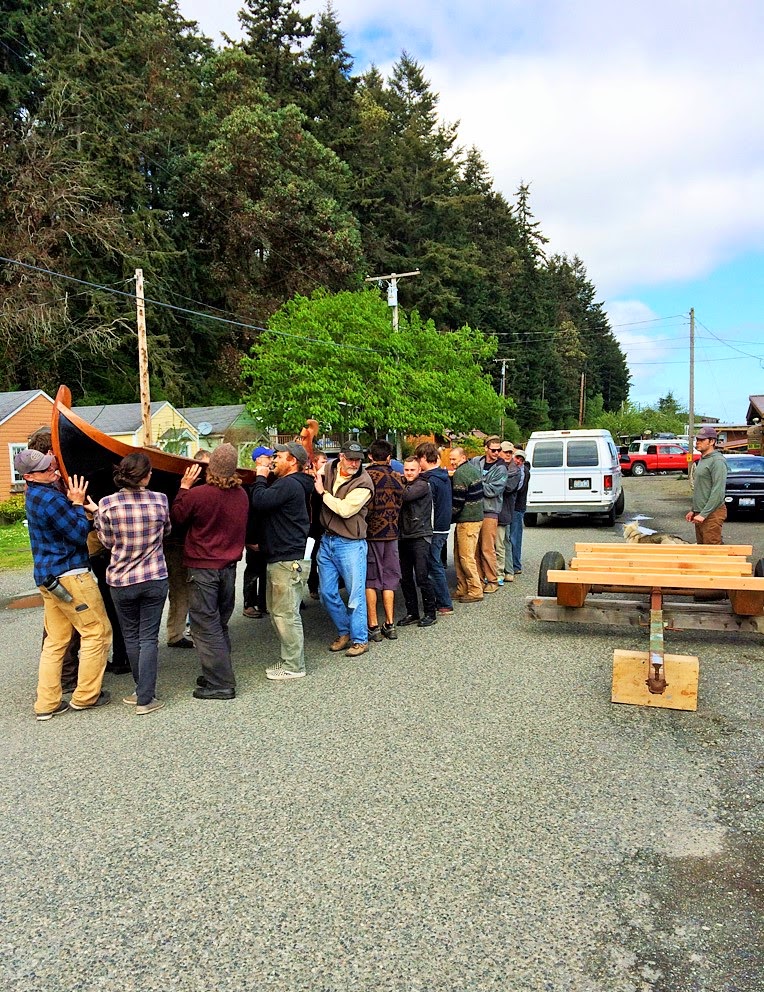 Everything went smoothly.
They gently placed her on a trailer and rolled her out to the old boat launch.


When the boat floated away from the trailer I felt a collective sigh of relief along the shore. The people cheered.


She was guided by line and wind to the small dock and Mark took his place on the stern. Unfortunately, the oar he had to use didn't fit into the forcola he had made, but he handled the boat well rowing soto morso. 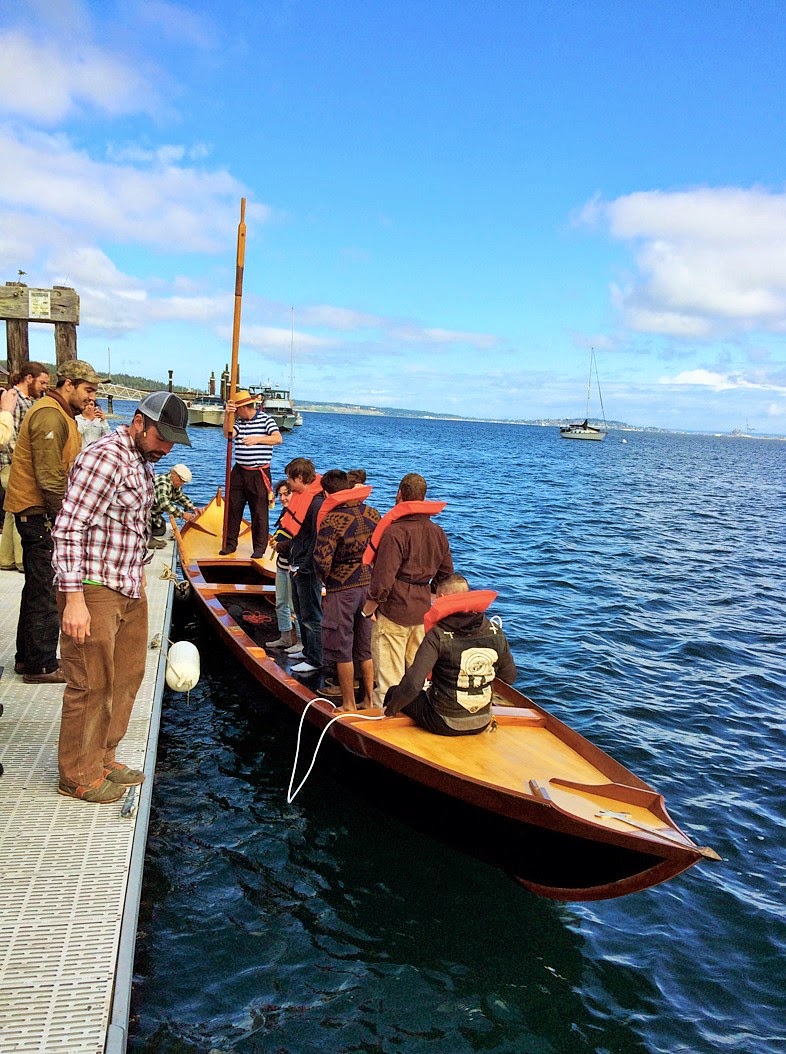 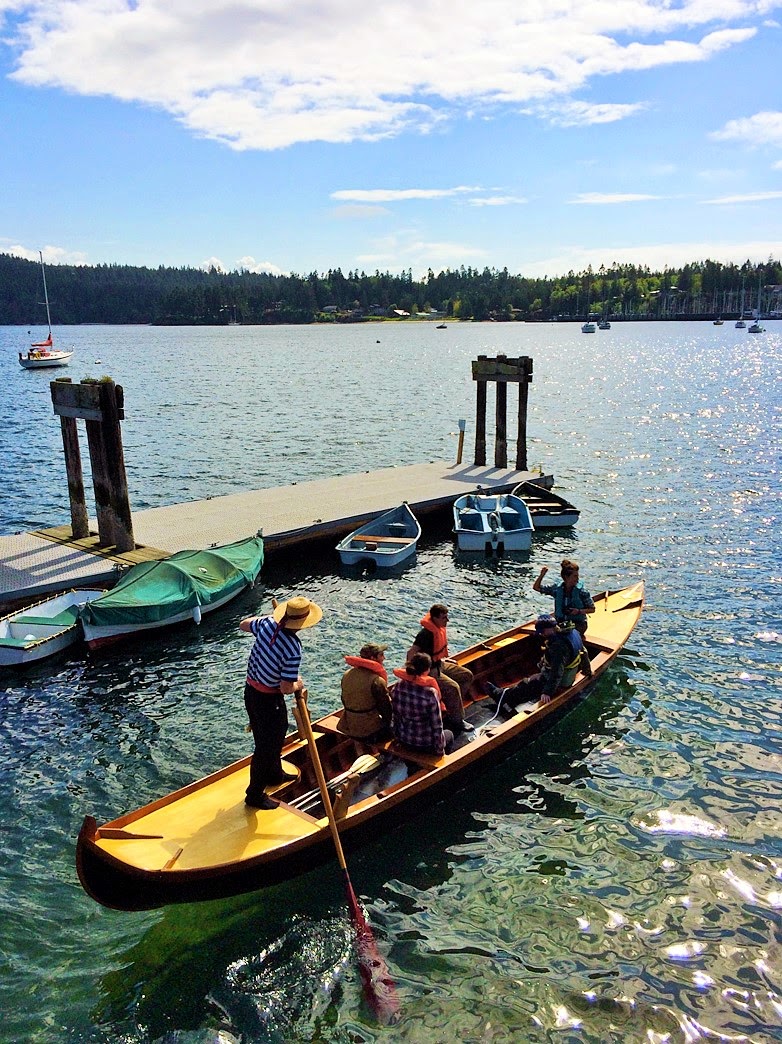 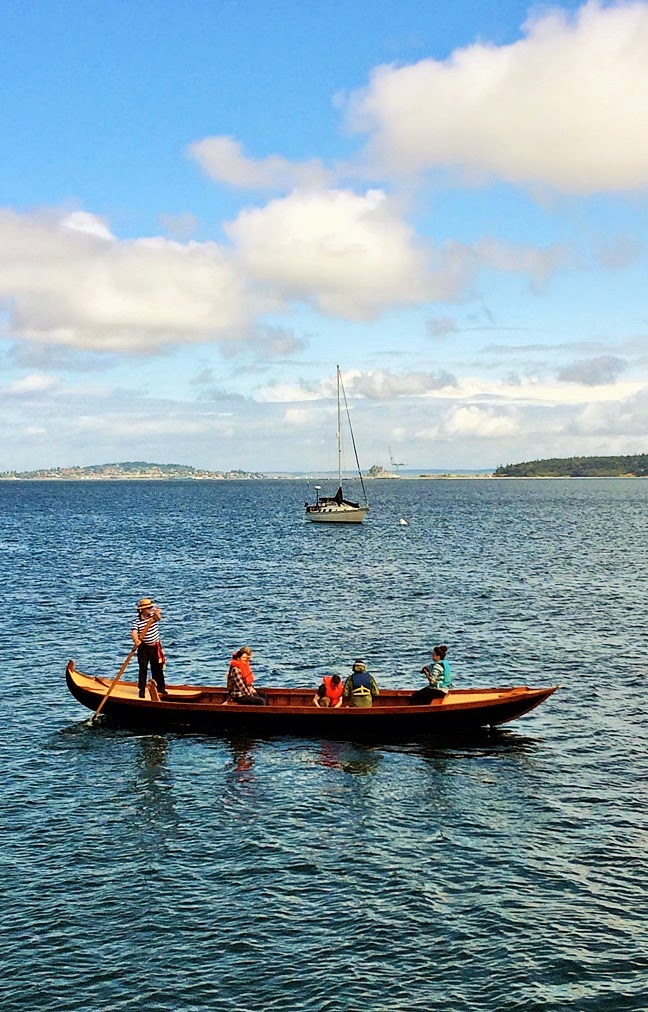 I couldn't do anything else but feel extremely happy for him.
He had a huge smile on his face and later revealed that he
wasn't going to be able to wipe it off for quite some time.


Just like in the shop, I found myself hearing the reactions of people standing around me. Some simply praised the look, some were excited to see it floating on the water, some talked about possible changes they would make if they were to build another one and others just stood quietly and watched. 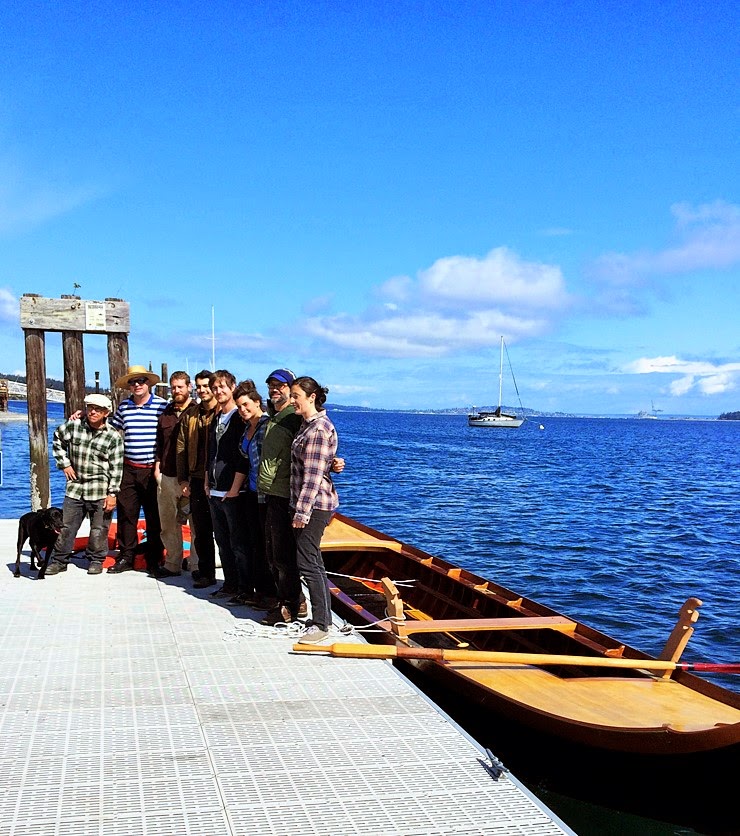 I overheard one guy say something about rigging it up with a sail,

I heard one girl wonder out loud about the rowing technique
(I immediately spoke up and explained it - that was fun for me),
and finally one of the students revealed she would be traveling to Venice
to study forcole under the direction of Paolo Brandolisio.


Will we have an American remer in the near future? That would be cool. 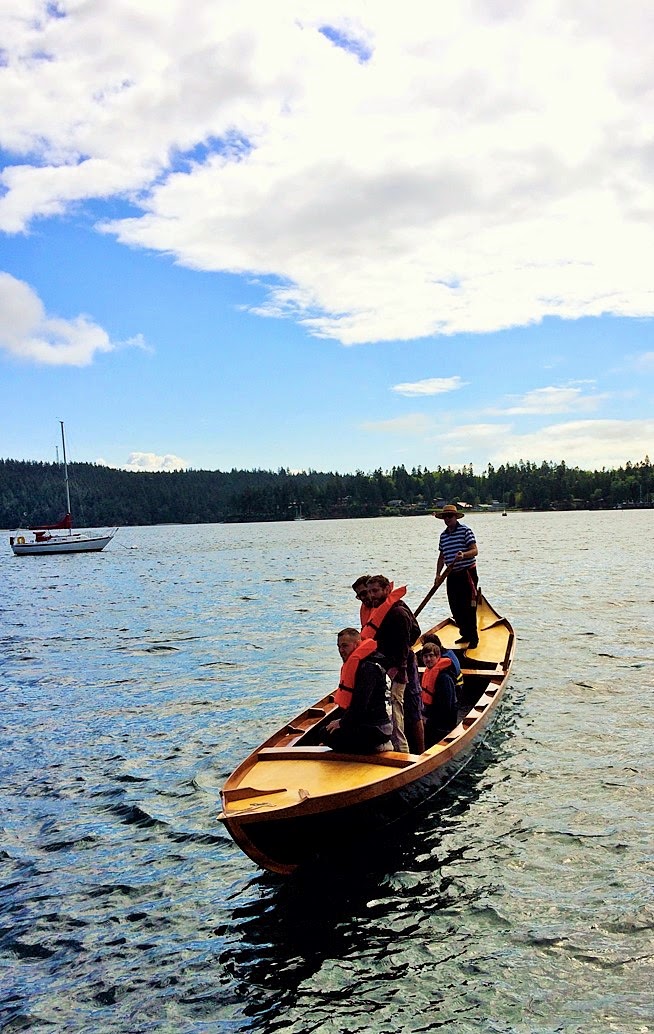 The beautiful batela was hauled out just like it was rolled in - without any problems. Now it will be wrapped up and shipped to Mark in Oxnard as soon as possible. 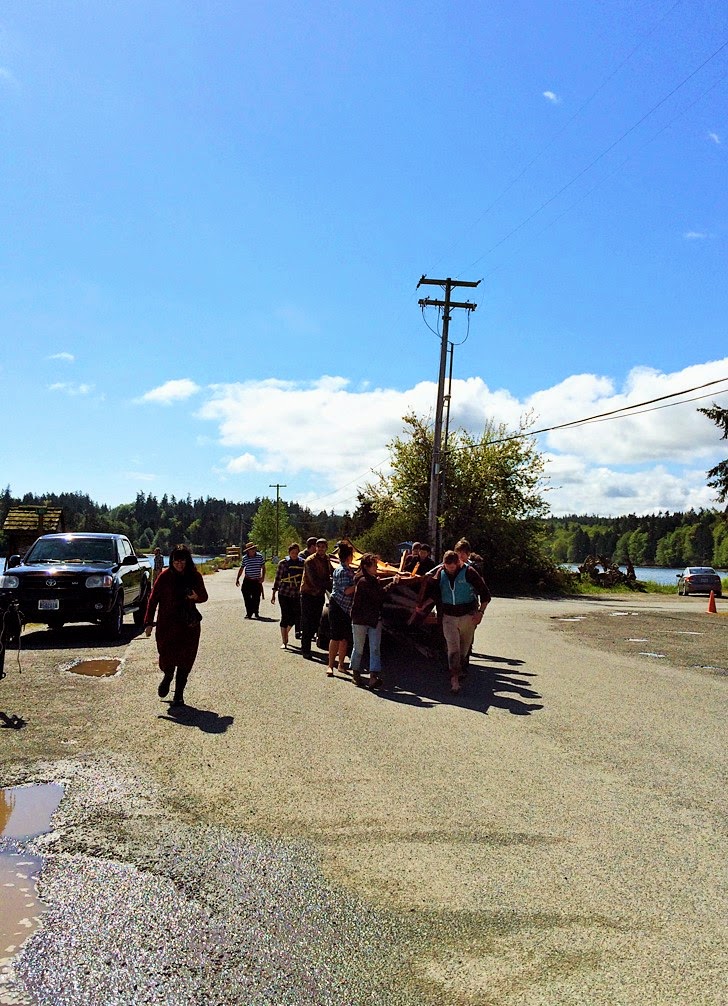 I had a great time and it was good to see an old face
from the gondola life I painfully miss.
Posted by Gondola Greg at 2:52 AM

Congratulations to Mark, and to the students of the Northwest Boat Building school who built this batella. The boat looks beautiful. How many customers will she hold?

Thanks. The Batela will hold up to 6 passengers.