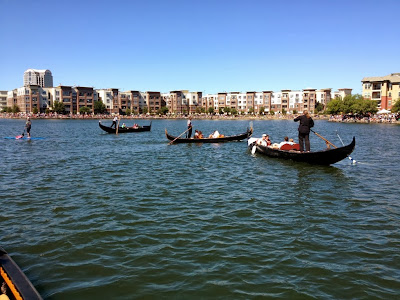 A few days ago I returned home from a twelve day visit to my Texas operation
in Irving (Dallas/Ft. Worth area).


As is typical when I travel, it's a little more challenging to get fresh posts up on the Gondola Blog. This is especially true in Irving, as I have a huge amount of work to do whenever I'm out there.


This trip to Texas revolved around a rather entertaining event which took place on Saturday, September 21st on our lake there in Irving.


Red Bull's "Flugtag" is, as one person described to me
"one of the more ridiculous events I've seen",
and yet he followed with "and I look forward to seeing it again". 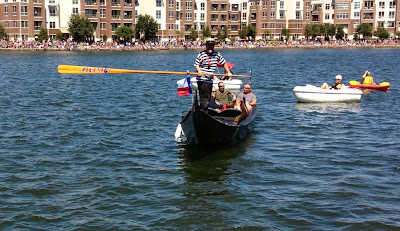 The night before the event, in the midst of all sorts of mad planning,
I got my hands on some cheap stick-on lettering and marked
one of the oars with "FLUGTAG".
Here, gondolier Fred Craven shows what happens to cheap
stick-on lettering when you row on it.
Fred looks great, the lettering, not so much.


So what exactly is Flugtag?
My sources tell me that it means "flight day" in German.
The whole crazy pushing-things-into-the-air thing first occurred in England in the early 70's under the name "Birdman Rally".  If you're as old as I am, you might have seen it.
When I heard that Red Bull had started doing their own version, I was thrilled.

Red Bull is serious about this event, and they go big. While we were watching Flugtag on Lake Carolyn in Texas, there were four more Flugtag events going on in Miami, Chicago, Washington D.C., and Long Beach, California.

It's hard to describe this event.

First, Imagine 30+ teams of people building things they THINK will fly - often out of plywood, cardboard, and paper mâché.


Next, assemble an enormous crowd to watch; on Saturday there were more than 92,000 people in Irving, all watching the action on (and flying off of) a large platform extending out over the water. 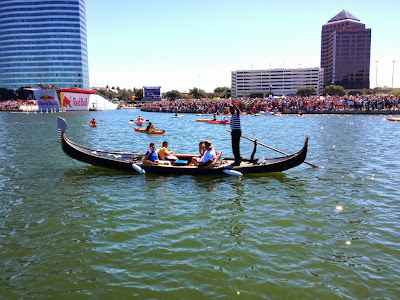 Behind gondolier Derrick you can see a small portion
of the hordes of people who showed up.

Each team takes their turn on this "flight deck" - first they do some kind of dance/drama/other kind of silly choreography, all accompanied by music of their choice, pumped out through a sound system worthy of a Bon Jovi concert.

After the crowd is sufficiently fired up, and the team has completed their fancy dancing, they all grab hold of their makeshift creation (the one they HOPE will fly), and push like mad towards the end and out over the water. 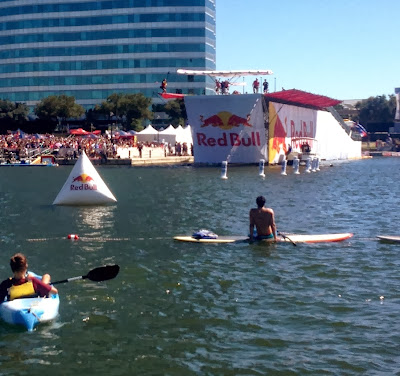 
Oh, there is one person up there who doesn't have the burden of pushing - yes, that lucky soul gets to be the "pilot" of the thing that's about to get shoved off the end.


Out of the hundreds of thousands of people watching, both in person and on TV, that "pilot" is the one person hoping more than anyone else, that their vehicle will fly.


Ok, in some cases, the mother of that person might be hoping a little bit more.


The best place to watch the action is from the water. 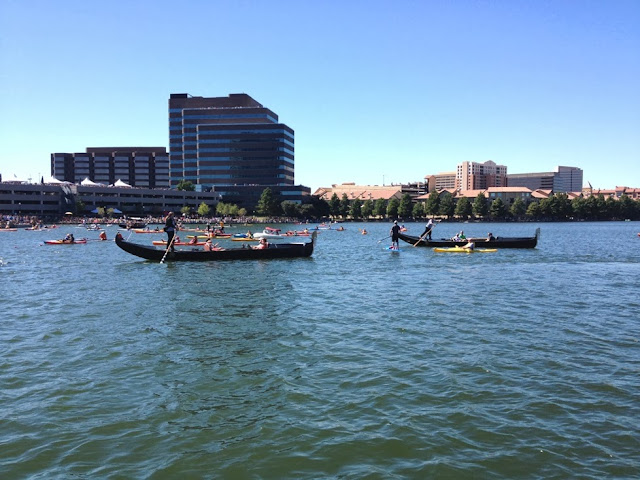 My Texas gondoliers and I took groups of spectators out for viewing sessions, moving amongst pedalboats, kayaks, and stand-up-paddle boarders.


I was able to snap off a few decent photos and grab video footage of some of the "flights".


I must point out that the word "flights" is somewhat inaccurate when applied to most of the contestants on that hot, windy Texas day.


All in all, only a handful of the thirty-two vehicles pushed down the runway did anything that would be considered "flying" by the Air Force, FAA, Texas Air National Guard, or any of the other authorities on avian activity.


Diving dramatically towards destruction might be a better description in this case.

I must apologize for the diminutive size and quality of these video clips.
Some might be a bit jumpy as well, because I was rowing against the wind with one hand and trying to focus on the action with the other.

The builders of this next craft did a really great job with the theme - making it look like a space shuttle, I'm sure they won points for that, but as you'll see, they did not do well in the distance scoring.


Entrants were judged on several fronts, including how far their craft flew.

I heard one team member say "we're certain that our craft will go at least thirty feet...becuase that's the vertical distance from the deck to the water".
Many "flights" accomplished just that.

I'm sure that many of the teams up there would have enjoyed greater success if the wind conditions had been different.


The wind was strong, quite strong,
and blowing directly at the end of the flight deck.


It's a funny thing how wind direction can have such a great effect on flight.


And in this scenario you'd think the wind direction would make for perfect flying conditions.  After all, don't they turn an aircraft carrier towards the wind when it's time to fly the planes off of it?
I suppose it would have been better if the vehicles attempting takeoff had engines.


Sadly, they did not, so here's how it played out for most of our would-be heroes of DIY flight:
1. Host makes bold announcement, introducing the next team
2. Team and their craft are on the flight deck as loud music thumps (often loud enough to be heard in Oklahoma)
3. Fancy dancing and other choreographed and not-so-choreographed business takes place.
4. Crowd gets whooped up.
5. Music either ends or comes to the point where it's time to push.
6. pilot gets in or on the vehicle.
7. A great effort is made to get the vehicle going towards the end of the deck.
8. At first the whole things moves swiftly towards the edge, but...
9. As the craft approaches it's date with gravity, it slows down.
(I couldn't tell if this was due to extra headwind coming over the edge,
if the pushers ran out of steam as they progressed on,
or if there was a general sense of worry or doom)
Almost every single vehicle hit the end so slow that...
10. The first thing to pass over the edge is the nose, and because it's goig too slow, it drops.
11. The headwind begins to press down on every surface of the craft, and as the rest of it leaves the deck...
12. It is unceremoniously blasted, all hopes of actual flight are dashed, and then the whole thing gets bashed into the water just below the flight deck (30 feet below).  Most pilots managed to bail out before impact. Most.
13. All pushers jump off the edge and into the water as well, some did flips, none did belly flops.


Some entries never made it to the end of the ramp.
I think this guy was lucky to walk away from his "landing":
http://redbullflugtagusa.com/page/teams/view_team/582/redneck_rocketeers


A couple of the more fragile ones came apart during the "push" phase - some ended up dead on the deck, others got pushed off in pieces.
This one went down sideways.

Here's a much better look at it:
http://redbullflugtagusa.com/page/teams/view_team/520/down_to_earth_dworks

(yes, I just overstated the obvious). Here’s a case in point.
http://redbullflugtagusa.com/page/teams/view_team/180/rec_shop

Nobody died at this event, and I was told that there was only one injury requiring attention.


These same winds created some challenges for gondoliers too,
we had to work to keep from getting blown into the "landing zone"...

And last Saturday we did see a few examples of what I'd consider actual flight.
Here's the flight of "Duct Tape Dynasty" - they took second place.
I'm convinced that in different wind conditions their craft would have soared magnificently.
The official video gives you a much better look:
http://redbullflugtagusa.com/page/teams/view_team/461/duct_tape_dynasty

The winning entry was a group called the "Texas Tomcats", who had a fighter jet theme.
They blasted the music from Top Gun, two nuts ran around carrying cardboard fighter jet costumes, there was a carrier-deck flag man, and their vehicle resembled an F-14.
I had the best view possible, and then I pushed the wrong button on my phone.
Luckily, someone posted this on YouTube:

All in all, it was a great day, I will never forget it, and I'm sure that every person who "flew" off that platform will look back on the day in amazement:
amazed either because their vehicle did fly, didn't fly, or that they did that crazy thing in front of so many people.