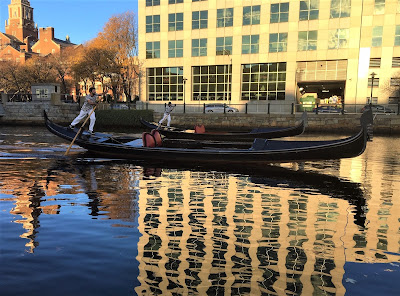 Rivera and Ruffino rushing by

The Solo Distance event is arguably the most difficult and demanding rowing competition in the U.S. Gondola Nationals - not just because it's an endurance race, but because the race requires a more "complete" rower.

Rowing as a team takes timing and cooperation
but you've got someone to help you share the work,
and with two or more on a boat, the burden of keeping the boat on course is shared as well.
Row the race alone, and it's all you. 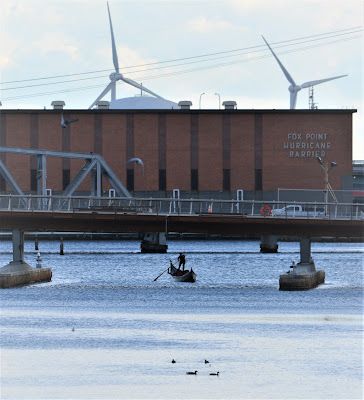 The wind blows, you correct.
The boat spins, you stop it.
Oh, and then there's the two and a half miles of water you've got to push the boat through.

Owner of La Gondola and host of this year's Nationals, Marcello, told me:
"More than anything else, it is the most psychological event - probably because it's the longest time-wise." 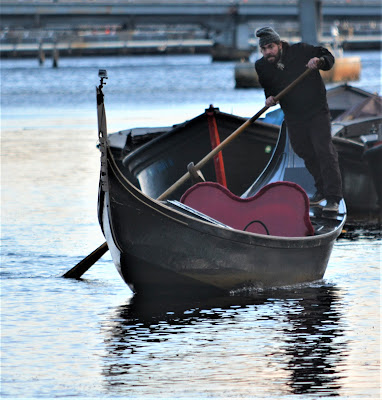 Alessandro powers his way to the finish line.

Gondoliers often show up at Nationals with several races on their "dance card", but only one or two they're really gunning for.
The Solo Distance is a prime example.
Gondoliers train for months to duel it out in this contest.

In this edition of the Solo Distance, the race was run in heats of two rowers at a time.
The times of each competitor were recorded and compared.
When there is an odd number of rowers,
one competitor rows the course alone.
There are no quarter finals or championship heats.
You get one chance on the course. 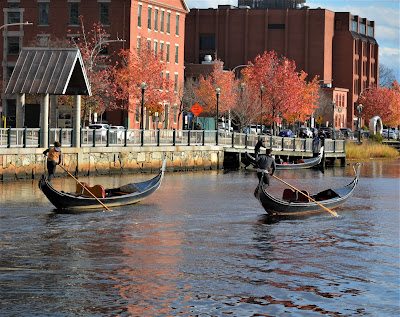 Ivano and Mariano begin their heat.

The Solo Distance race this year followed a down-and-back course
which was rowed twice, for a total of 2.5 miles.
Competitors began upriver from the Crawford Street bridge,
got a running start,
and rowed down the Providence River.
They passed under the pedestrian bridge being built on the piers of the old Route 95 bridge,
and then turned around the boat-like structure that surrounds the base of the Point Street bridge, and then returned.
Coming back was the most challenging part as they found themselves working against both wind and current. 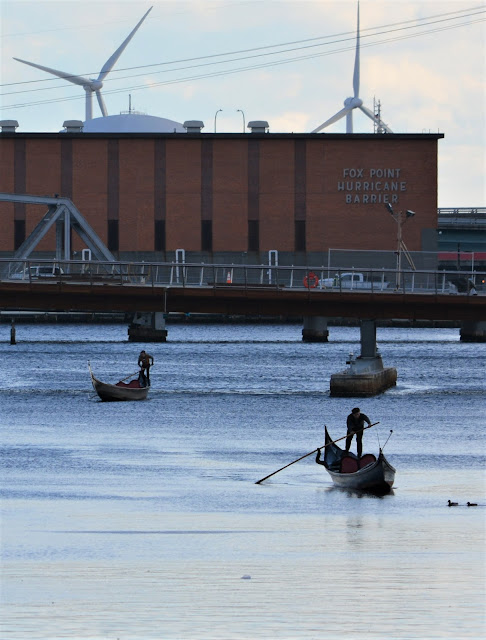 Ivano and Mariano in windy conditions.

Providence gondolier Mariano said:
"It felt like after passing the pedestrian bridge the winds picked up 20 mph. The journey around the Point Street bridge to old 95 bridge was by far the most challenging."

Ah, but this wasn't a simple "wind fight" - where you work against the wind head-on.  In this location, the wind was coming in from the west - hitting the boats from the port side and shoving them into bridges.
At times the wind would shift - coming in at an angle - a sort of headwind from the side.
At one point I watched the wind come in from the east,
again pushing boats into obstacles - this time in the other direction.

After his heat, Michael Angelo Ruffino told me everything I needed to know:
"The whole race happens between the two bridges." 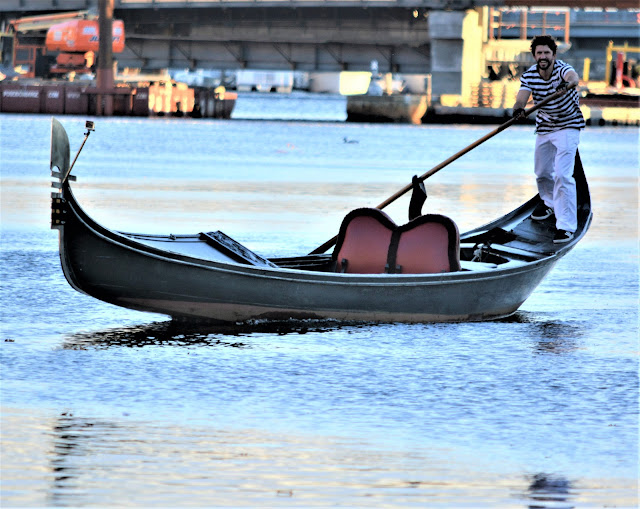 The buildings on the west shore created some cover, but once guys emerged from behind them, the game was on, and the wind scored a lot more points than the rowers.

in a post-race conversation with Marcello of Providence,
we talked about this "third dynamic."

"It seems like the Solo Distance, more than any other event, is more than just a race of the fastest competitor. It is long, and you’re all alone, you and the boat, trying to get into your rhythm, but at least in Newport Beach, Minnesota, and Providence (three of the last four years) it’s been about you versus the conditions just as much as you versus the competitors."

Indeed that has been the case for a lot of the distance racers over the years, but none have been more affected by conditions than the solo rowers.


A good example would be Marcello's brother Alessandro - a powerful and experienced rower who won gold in the event in 2016, but had to scratch the previous year due to conditions. This year he had a great run on his first down-and-back, but on the second loop a rogue gust of wind blasted his boat against a bridge foundation.  He ended up in the water, immediately out and back on the boat, and finished strong, but not before the winds knocked his time out of medal contention. 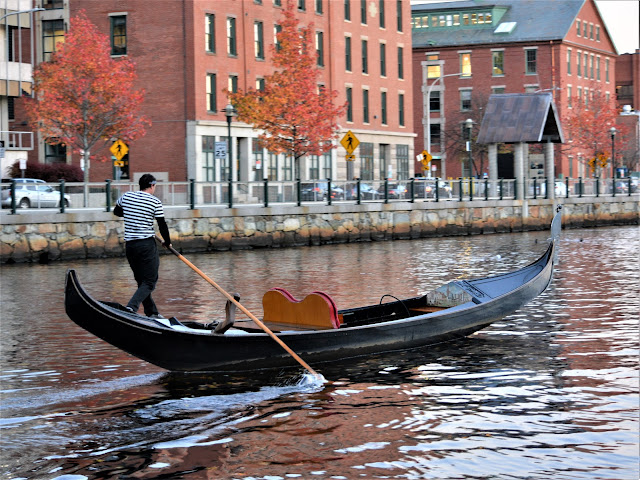 Marcello in a solo pursuit.

"Gondolas and wind mix like orange juice and toothpaste, and there was about 100 gallons of juice out there.
That wind was unreal: dead stop in the middle of a race."

When all is said and done, one of the best ways to evaluate a gondolier is how he or she handles adverse conditions in a single oar capacity.
In both racing and passenger cruise situations, when wind, current, rough seas, or other calamities threaten you, that's when you find out just how much you're capable of. 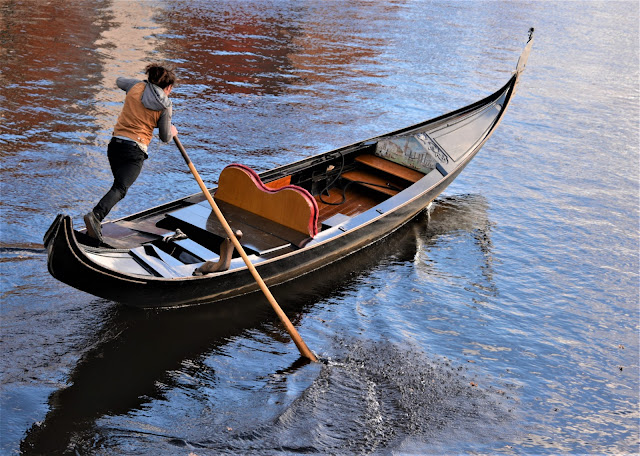 All the rowers that day in Providence did incredible work.
In the case of some competitors - it was earning a medal.
For others it was a matter of getting knocked down and rising again to fight even harder - to finish with determination and earn the respect of everyone watching.

As Marcello put it "you're all alone, you and the boat."
Will you bow to adversity?
Will you quit?
Or will you rise to the occasion?

Nobody quit that day. 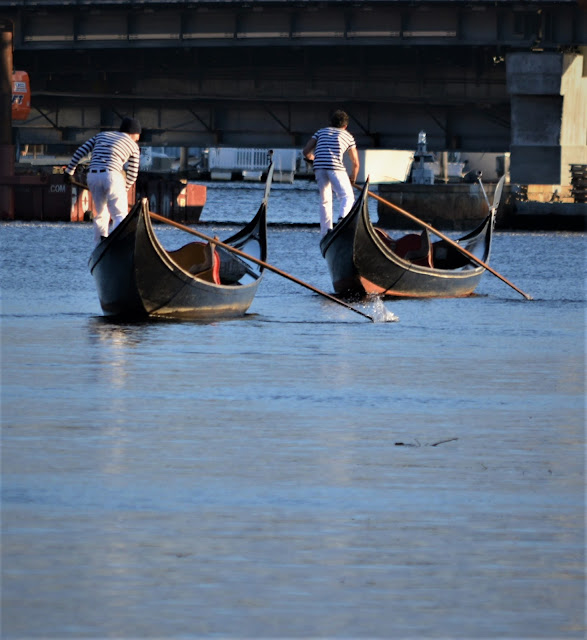 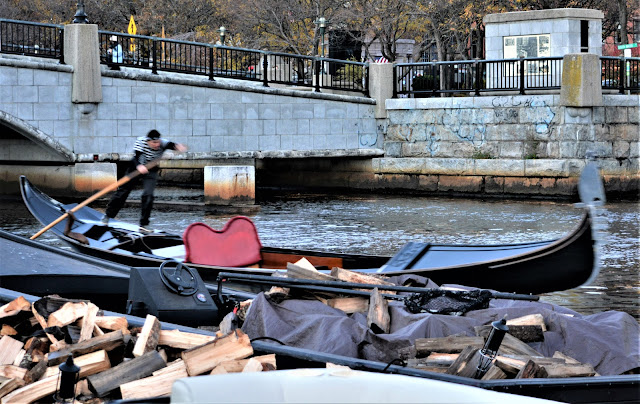 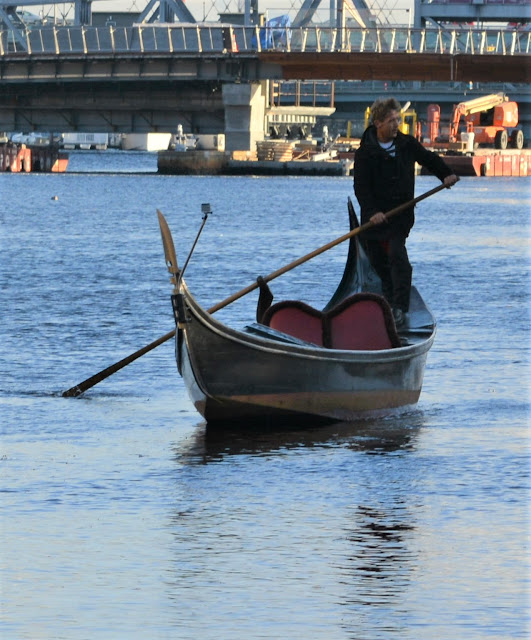 Bepi checks with the time keepers at the finish line. 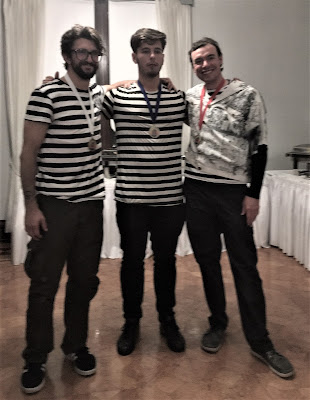 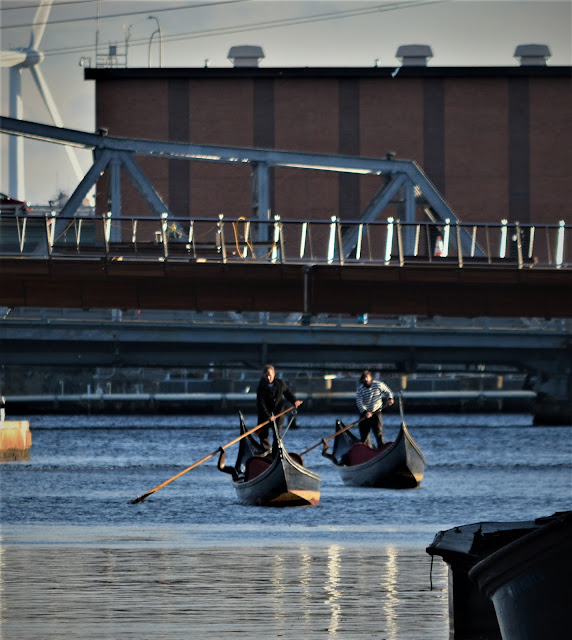 Bepi and Alessandro  - a beautiful still shot...
of a hard fight against wind and current.

Hi
I am looking for the make plan of oar that is gondola boat.
Please know me the way.
Thank you
My email :boatclub@naver.com