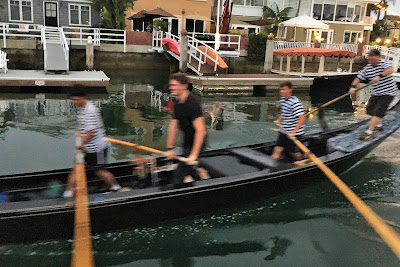 Tonight, as the sun was just touching down on the horizon,
my guys and I were securing the Forcole on our gondola, The Phoenix
in preparation for our first four-oar workout.
When I woke up this morning, the sun was large and in charge,
burning bright, with no clouds to burn through.
But by late afternoon a marine layer had moved in,
and we were once again enjoying that gray haze following the
bright orange ball's touchdown.
We shoved off, got situated, and went about the business of reconnecting
with November of last year.
I was quite surprised at how well these guys re-engaged with all the work we'd done last year.  I'd have gotten them all on the boat much sooner,
but Jakob was working on a fishing boat in Alaska until just last week.
Passing other boats I announced that we were operating in "four wheel drive".
After eight months of rowing with one remo, it was refreshing and exhilarating to move so fast over the water.
I lost track of the number of times I shouted "Oh, I've missed this!"
Simon, Jakob and Kalev were all naturals - jumping back into the four-man configuration.  We spent much of the times cracking jokes as we rowed. 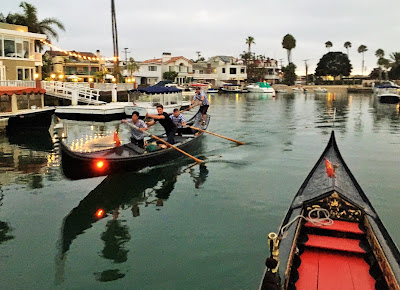 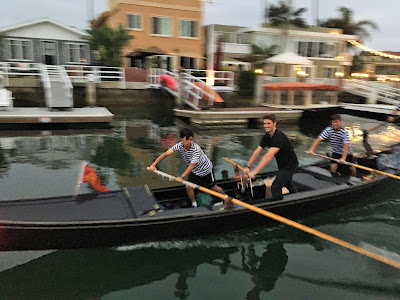 ...and passing by quickly.

Of course, there were those "Whoa, wait-a-minute!" moments,
and guys needed to take a break more than they did last October,
but it was a great first run for this team.

Minnesota, here we come!
Posted by Gondola Greg at 11:00 PM