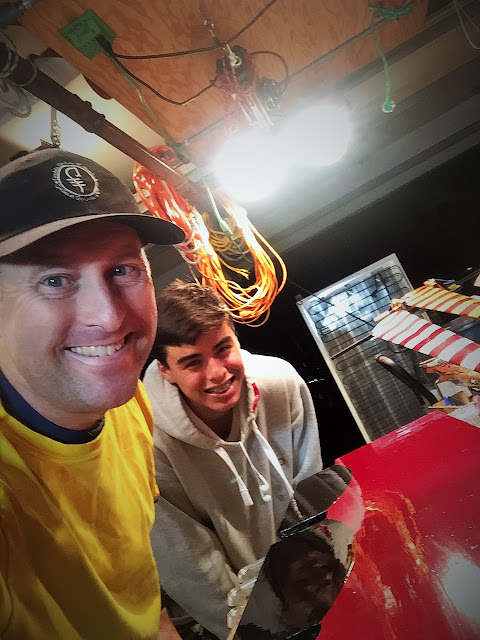 For the last few months I've had a slow-and-steady project going:
building replacement floorboards for the Lucia.

She was built in 1960 in Venezia.
Somewhere along the line, her original floorboards were replaced here
in California.  Those held up pretty well, but I realized last summer that it was time to give the gondola a fresh set.

If you were at the US Gondola nationals or saw some of the overhead video, you may have noticed the unfinished set up front.
I purposely cut and fitted those prior to the races,
knowing that in a tandem race, the front rower would need more
solid footing than what the old boards could provide. 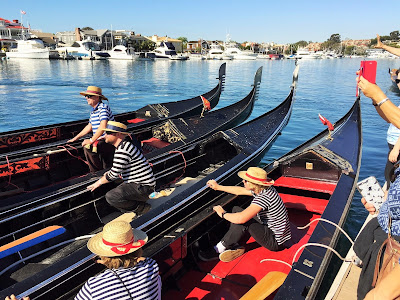 After Nationals, I pulled the new floorboards from the front, measured,
patterned, cut and fit a set for the back half of the passenger area.

All six pieces received a solid slathering of Smith's penetrating epoxy.
Then I put them in the side yard for a week to get all that "fuming"
out of their systems.

Then pulled, sanded, wiped.
Three coats of primer/foundation paint were applied,
after all that they were set aside for a couple more weeks to cure. 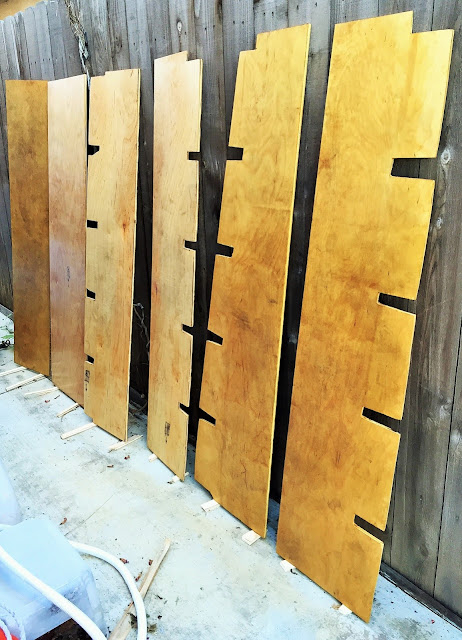 After the penetrating epoxy, and before the primer.
You can't see it...but those boards are just "fuming".

Once the foundation paint had reached an enamel-like hardness,
it was time for more fun.
We hit all top surfaces with an orbital disk sander,
ensuring the next phase of coating would stick well.

Over the years I've spent a lot of time with two paint products.
For hulls and decks, especially in black, I like Brightsides by Interlux.
It's not the most sophisticated (or expensive),
and it tends to keep a shine well.

For floors and remo blades, I've come to rely on Easypoxy by Pettit.
It's practically idiot-proof (just my level), but more importantly,
it hardens faster and holds up better under the punishment of foot traffic.

For Lucia, I wanted a theme color other than the classic red.
I chose Pettit's burgundy shade of Easypoxy.
The more time I spend with it, the more I love this color.

Four beautiful coats of burgundy later and the boards were ready for the finishing touch: scallops. 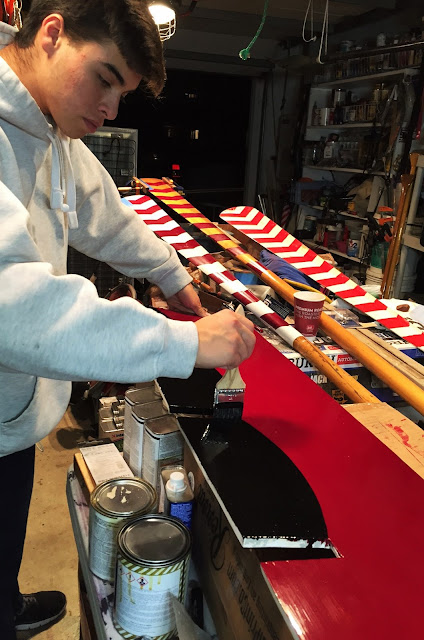 With many of the modern marine paints, if you time it right you can skip the traditional practice of sanding between coats.
Ah, yes, I'm sure someone out there just spit out his linguini at that last statement I made.

To the super-traditionalists I say:
good for you - you don't believe in cutting any corners,
but sorry - I don't have the time (or the patience) to wait until each coat has hardened enough to sand.

Where was I?
Oh yeah, I was skipping the sanding.
With modern coatings (varnish as well), you can wait until it's lost it's tackiness, but is still not fully cured, then wipe yesterday's coat with the appropriate thinner, then apply today's coat.
The thinner wipe effectively softens yesterday's paint so when you add new product, the two layers of paint bond together.

This is especially handy when adding scallops.
With the subtle yet complex curve, masking and sanding for such a thing would make for lots of extra hassle, and probably a headache.

Tonight, as the clouds teased us with some light drizzle,
and everything outside was cool and wet,
Kalev and I broke out the black paint under hot lights,
and went about one of my favorite pursuits: finding that perfect arc.

(If you're annoyed with me that it took this long to work in the title of this post into the text, well, you're probably not alone, but, well, sorry.
For the record, I'm kinda annoyed about it too.)

The "arc" of which I speak, is that curved border between the black and the burgundy.  It's been my experience that the best way to create it is to simply freehand with a fresh brush, then fill in the rest of the black scallop field after. 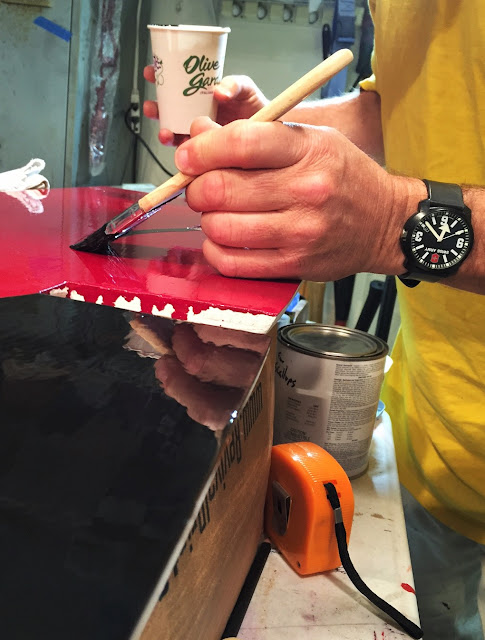 The "arc" in action.

Having a clean rag with the Pettit thinner on hand is helpful for those completely disastrous attempts, but in the end, you've just got to go for it.
As for me, I find that the right music helps.
Lately I've been revisiting my musical past by digging through my old collection of cassettes.
From Patsy Cline, to Yello, to Megadeth, to the Crash Test Dummies,
I've got just the right tape for every mood and project
(if I can just find it in the stack).

Normally I find myself painting scallops onto existing boards,
which often have a slight ridge or darker show-through of the old black paint.
In those cases you just follow the curve of the previous pattern.

Tonight I got to blaze my own trail with the brush, and it was a blast.
I found that it was easy to establish the general shape that I wanted with the thinner rag during the pre-wipe.
Following that arc helped, but in the end it's about brush control and having a steady hand.

As I showed Kalev the sublime curve of the scallop arc,
we were like two surfers discussing the perfect wave. 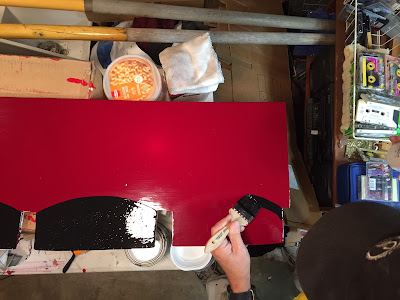 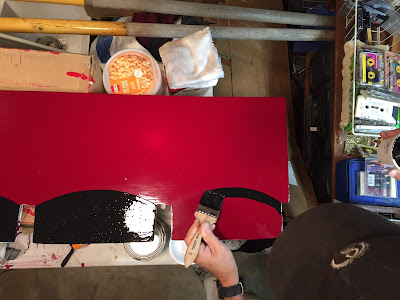 Coming over the rise. 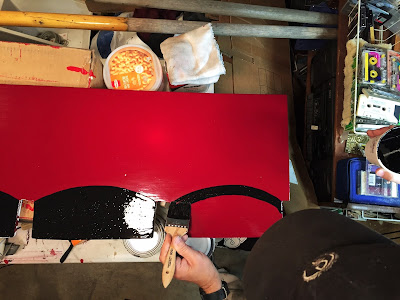 Bringing it home.
(see my cassette collection over there?)

I handled the "arc chasing", and then Kalev did much of the field-filling. 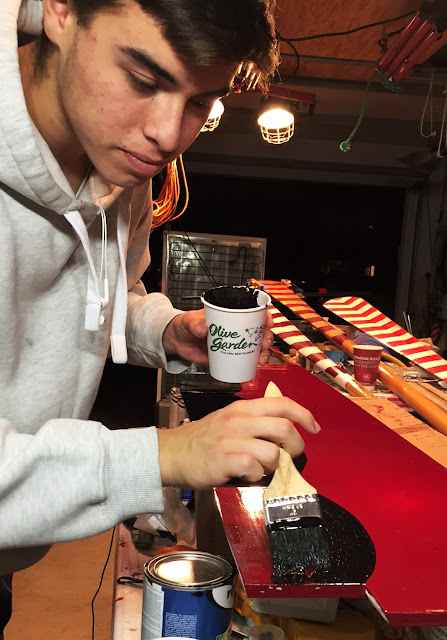 I swear, this was not intended to be product placement for a certain restaurant. Their coffee was ok, the cup,
however, works perfectly for painting.

Four boards and twenty scallops later, we were happy with the first coat and looking forward to doing it all again tomorrow. 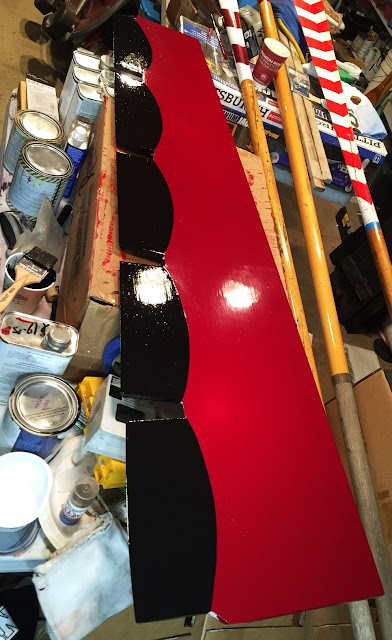 Perhaps by the time you read this, we'll be finding that perfect arc again.
Posted by Gondola Greg at 10:30 PM

I chose to extend the back set by one more frame.
I wondered if anyone might catch that.

Free handing with a brush that size - you're making your Mama proud!