If you know me,
if you really know me,
you know that I am not a morning person.
I thrive on a late night schedule
(and despise morning phone calls from telemarketers).

But once a year I voluntarily crawl out of bed
early enough to catch the Regata Storica live as it takes place in Venice.
As it is for the Venetians, it is my Superbowl Sunday
(except it starts much earlier for us in California).
Regata Storica took place this year on September 1st.

SETTING UP
Over the years I've enjoyed it on the big screen through Dish Network,
but this year they stopped carrying the Italian channel.
So this time I had to get creative.
I assembled various webcams on my computer and had them open in separate windows.
My friend Alessandro Santini happened to be on his gondola in front of Harry's Bar and was gracious enough to send me a few video clips of passing races.

Then I discovered that Jane and the Row Venice staff were going to be going live on Facebook.
As an added bonus I got to hear some good commentary from Jane and the staff. I also got to see the Regata Storica from the balcony of a palazzo for the first time.

This year I was even more thrilled to watch the regata because I knew so many of the participants.
And it was quite a memorable one.

In both the gondolini and women's categories,
we've seen years of similar results.
On the women's side the duo of Romina Ardit and Anna Mao
have won handily year after year.

GONDOLINO
In the gondolino races we saw a longstanding rivalry between two teams: Redolfi Tezzat and Paolo D'este (a big guy known by most as "Gigante")
vs. Rudi and Igor Vignotto - two cousins from Sant'Erasmo
referred to as the "Cugini".

Last year, after both of their rowing partners had retired, Gigante joined forces with Rudy Vignotto and they ran the regata unchallenged.

In past years we saw contests where the winners were a given,
and it was just a matter of who would finish first...behind them.

This year was different though.
Rudi Vignotto's son Mattia was old enough to compete,
so they took to the water as a team on a green gondolino.
The new Vignotto team did well, and managed to cross the finish line in 3rd place - not bad considering this was Mattia's first Regata Storica in the gondolino race. 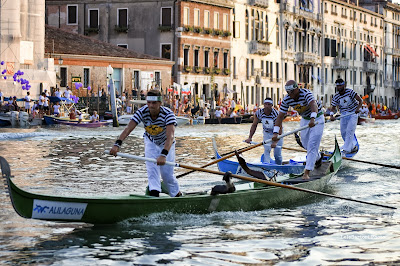 The father and son team from the famous Vignotto family.

Second place was the yellow gondolino
with Andrea Ortica and Jacopo Colombi on board. 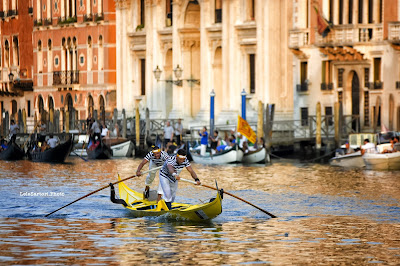 Andrea Ortica and Jacopo Colombi driving it home to a second place finish.

But the winners of the 2019 Regata Storica
were Andrea Bertoldini and Mattia Colombi. 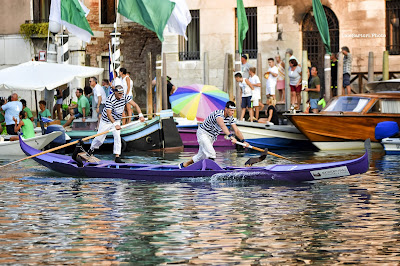 Bertoldini and Colombi finished the fastest in their purple gondolino.


As I was texting back and forth with gondolier Alessandro Santini,
he started to go crazy because he recognize one of the guys in the lead boat (purple) as a friend of his.

It seemed like all the gondoliers along that corridor knew Bertoldini
and called him "Cici".  Turns out he's a gondolier in front of the Hotel Bauer (which is just around the corner from there).


His friend "Cici" Bertoldini has had many good races but this was huge.
We followed the boats through the course on webcam.

The purple boat held the lead through the whole race,
and at the end "Cici" and his tandem partner Mattia Colombi were standing on the judges platform holding red bandieri
(the first place flags used in Venetian regatas). 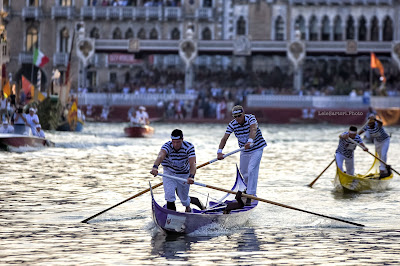 Over the years I became a fan of both teams in the Cugini/Gigante rivalry.
It made for some great race drama.
But I also felt bad for the other teams.  It seemed like they were playing basketball in the time of Jordan, or golfing against Tiger Woods.
Now we are seeing a new chapter in the gondolino category of Regata Storica.

Of course there's no telling what the field will look like next year.
People have speculated that The Rudi/Gigante pairing might return in another year, but after the father and son duo from the Vignotto family finished well this year, you have to wonder if we'll see them competing as a team for years to come.  It's worth mentioning that Mattia Vignotto was on six-man the caorlina team that took first place last year. 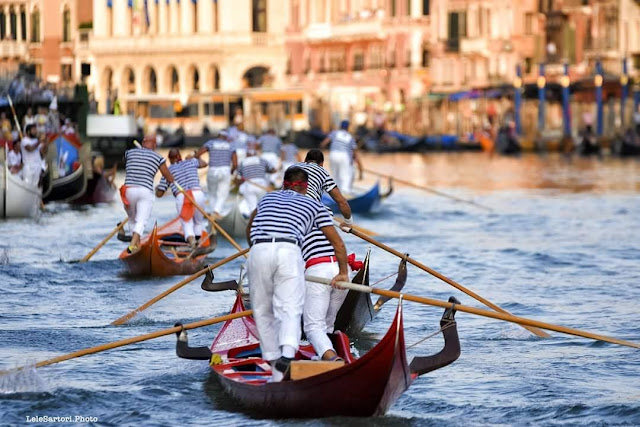 DONNE
After watching the Regata di Sant'Erasmo this year, and spending time with some of the Row Venice crew, the race I was really looking forward to watching at this year's Regata Storica was the "Donne" - the women's race.  I had so many friends in the field and with recent races won by different Row Venice staff members, it seemed like maybe this would be the year we saw new champions.

To fully appreciate what it's like to row this race,
you need to understand a few things:

First, the whole thing starts out in the open waters of Bacino San Marco.
It might be placid and calm in the morning when the Vogalonga begins there, but on an afternoon in September it can be windy, choppy, and it's a decent piece of water to row in-lane (about 500 meters) before you can start to jockey for your position in the fast-moving peloton that rushes up the Grand Canal.

Second, it's the one regata where everybody is watching, and shouting, and screaming your name from boats and buildings, from vaporetto platforms and any window they can hang out of.

Third, you're on TV for heaven's sake.
So the judges and everyone else is on display as well.

And fourth, it's the big one, the Superbowl of voga-alla-Veneta.
Anyone who competes in this race will leave it all in the ring at the end of the match.

I watched a webcam that faces the Bacino San Marco and saw the mascarete plowing through the stretch where you stay in your lane and pretty much drag race to gain a leading position before everyone bunches up. The lighting wasn't great, but I knew the race had begun.

Allesandro sent me this video, which told me what I needed to know about how things were developing at the beginning of the race.


Switching to the Row Venice live feed on Facebook I saw them flying up the Grand Canal.  They came around the corner in front of the judges platform as church bells all over the city were chiming.
It was magnificent - like a movie.

The first mascareta coming into view was the green one with Elena and Elisa Costantini on board.  They were rowing strong. then the team of Romina Ardit and Anna Mao in hot pursuit.
Venetians everywhere began to lose their mind.
The Row Venice folks were especially happy to see Elisa in the lead boat, because she's one of their star instructors. 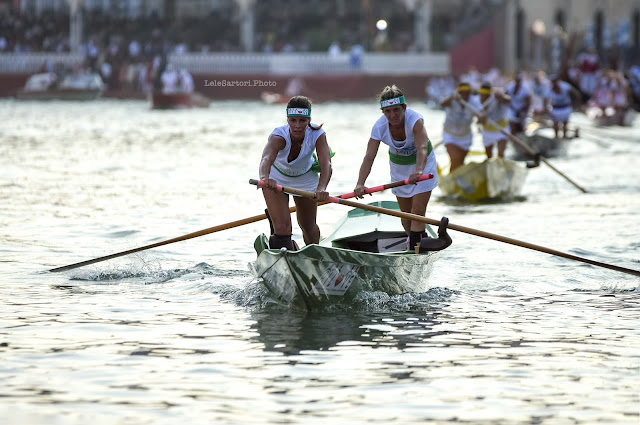 A column of fast-moving boats chased after the green and yellow.
The Costantinis had about three boat lengths between them and Mao and Ardit in their yellow boat. 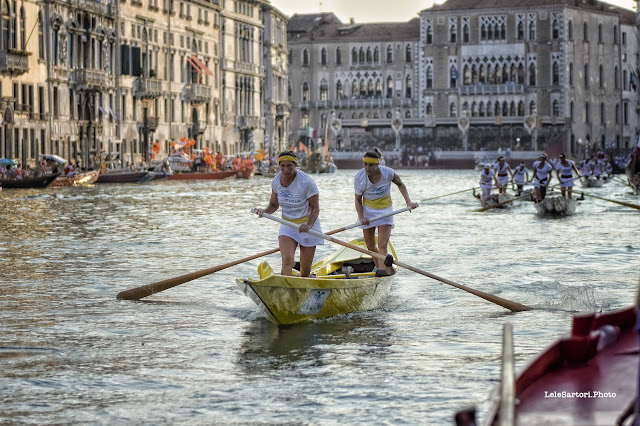 Another two boat lengths behind them and we saw three more boats in a tight end-to-end group.
The maroon boat was running in third place with Magda Tagliapietra and Sofia D'Aloja (Row Venice staff), next was the red mascareta with Row Venice instructor Giulia Tagliapietra and her tandem partner Elisabetta Nordio. 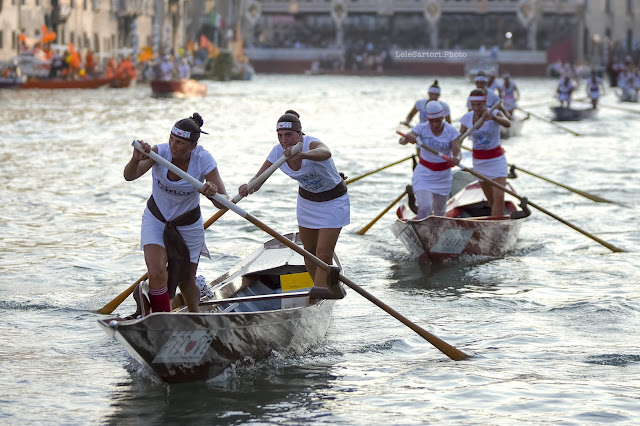 The white boat in fifth position was another Vignotto pairing - this time the mother-daughter duo of Rudi's wife Luisella Schiavon (a past champion of many Regata Storicas) and their daughter Lara Vignotto.
I wonder if this is the first Regata Storica where a father and son, and a mother and daughter - both from the same family - have competed. 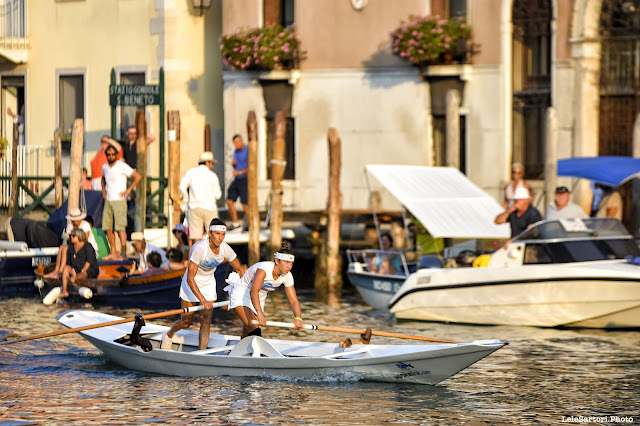 Mother and daughter in action.

My friend Elena Almansi and her partner Romina Catanzaro pushed through on a pink mascareta, followed by purple - with Francesca Costantini and Rossana Nardo.  The light blue and orange boats rounded out the nine boat field.

Switching to my two webcams on either side of the Rialto Bridge, I saw the same order of boats make their way through that tight passageway.
The webcams have no sound, but I could imagine the noise from the crowds echoing off every wall and surface as they cheered the rowers on.

The women continued up the Grand Canal to a turning marker and then high-tailed it back down the way they came.
Passing by the Rialto once again, I saw that the Costantinis had not only maintained their lead, but it looked like they'd maybe added a little to that lead.

Switching back to Jane and the Row Venice feed I waited; wondering if the women in the green boat could hold their lead.
In Sant'Erasmo I witnessed the remarkable speed of Ardit and Mao at the end of a race, as they blew past several other boats.

As the racers came into view it was clear:
The Costantini team had definitely increased their lead and were sprinting toward the finish line at breakneck speed in their green mascareta. 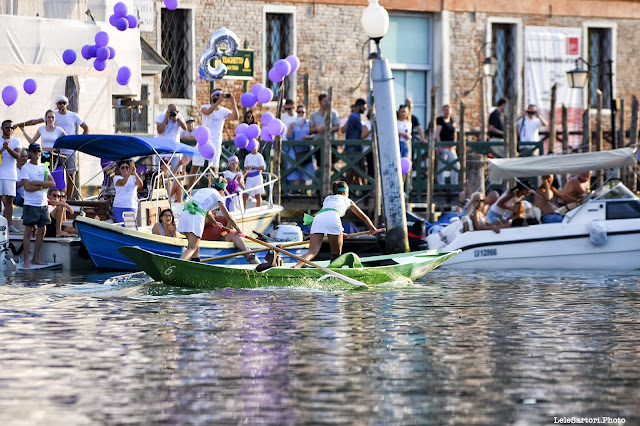 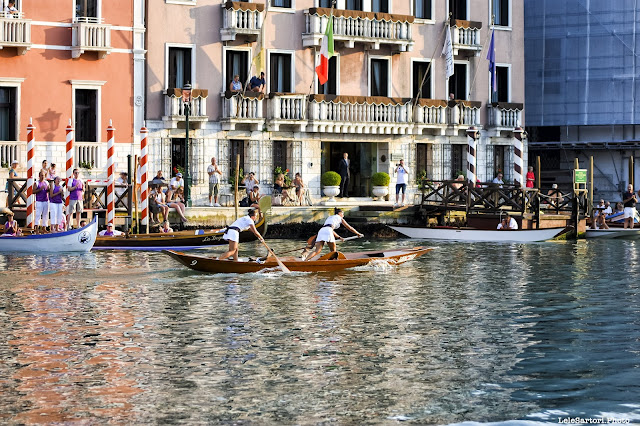 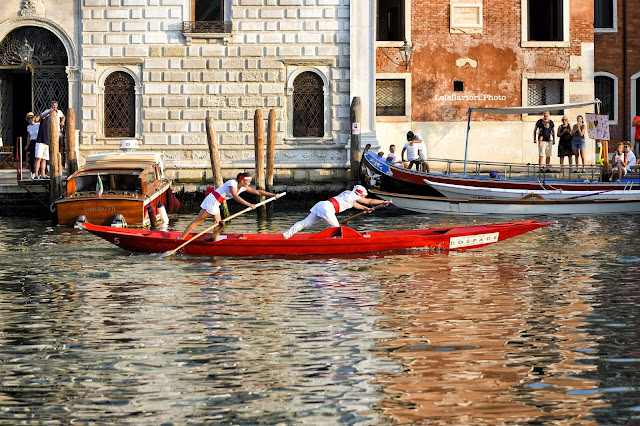 Giulia and Elisabetta with an impressive finish for fourth place.

If ever there were a year I wished I could be in Venice to watch Regata Storica in-person, it was this year.

Many thanks to Lele Sartori for allowing me to use his great photographs.
They almost made me feel like I was there. 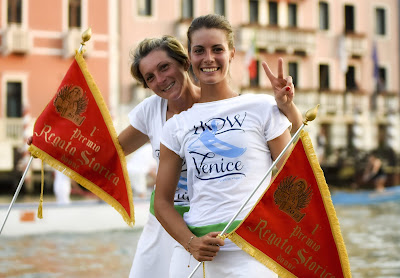 The Costantini team with their first place red bandieri.
Posted by Gondola Greg at 3:18 AM