AMSTERDAM - by Gondola and by Bike

some photos by Tirza Mol 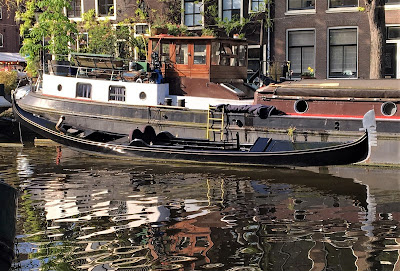 “No, here comes another one,” Tirza announced.

I worked fast, turning the gondola quickly to avoid the large tour boat that was emerging from under the bridge.
It was the third time this had happened in the last few minutes.

Technically this wasn’t my first time in Amsterdam, but it was the first time I’d left the structured chaos of the city’s airport.
Each time I’d touched down in the hub airport in the Netherlands,
I looked out a window, knowing there was a gondola out there,
but also knowing I had limited time to make it to my connecting flight.
In my opinion, you can’t really say that you’ve been to a place if you never left the airport.
When my wife started planning a cruise that would depart from Amsterdam, I was determined to make it to the famous canals there, meet Tirza, and see her beautiful gondola.
I contacted Tirza and told her of our trip.
Fortunately she was going to be in town.

In the weeks leading up to our visit, I watched the weather with increasing concern, as rain and winds were showing up regularly there.
As our plane landed I was happy to see sunny skies.
The winds were still a question mark, but I held out hope that whatever the conditions, I’d be able to handle them.
My family had a series of things to see, with windmills, chocolates, and cheese on their list.
They dropped me off near my meeting point with Tirza about an hour before our scheduled meeting time of 10am.
I hadn’t slept much at all in the last few days, and only managed a few hours on the flight over, but the anticipaton of finally being in Amsterdam, combined with the sights and sounds that greeted me on a crisp, clear morning had me wide awake.  The ancient city was alive and buzzing on a Saturday morning, as vendors off all types set up to sell their wares at a farmer’s market-like street fair that was getting underway.  In a short time I found the gondola.  She was beautiful: black and shiny, and so easy to spot, side-tied to a live-aboard barge in the Dutch waterway. 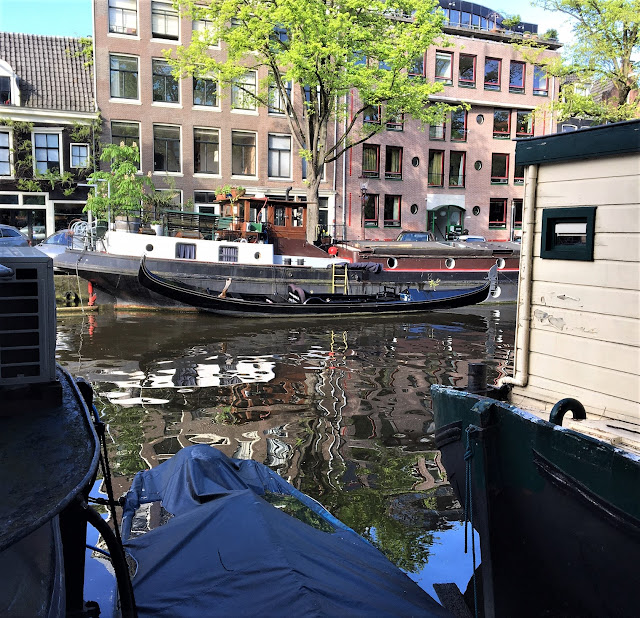 Tirza Mol decided to build a gondola as a graduation project for her boat-building study at the Amsterdam Wood and Furniture College.  She did an internship in Venice, spending four months at the famous Squero Tramontin. 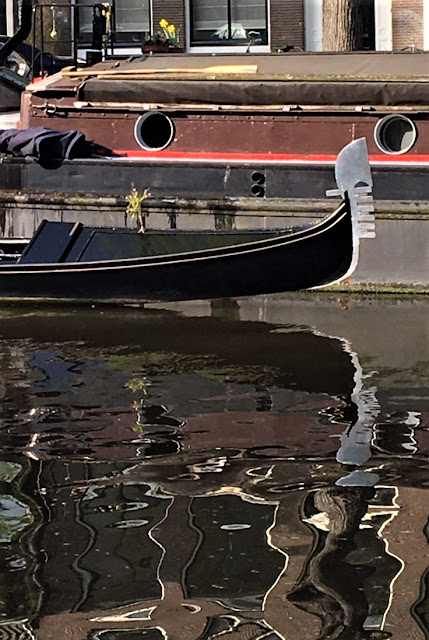 Returning to Amsterdam, Tirza and her project partner Leentje Visser got to work building a gondola there in the Netherlands.  The boat was completed in 1998. 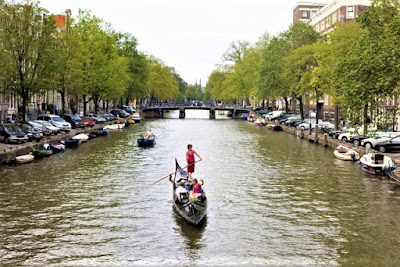 It was 9:30am.
I was supposed to meet Tirza at a dock further down the canal,
but after a half-hour of people watching at the farmer’s market
I saw Tirza getting off her bicycle.
We’d never met, but I recognized her easily in her signature red skirt and blouse.  There are many recognizable people in the gondola world, but none stand out like the tall Dutch lady, rowing barefooted in a red dress.
It’s absolutely iconic, and it really suits her … and her city. 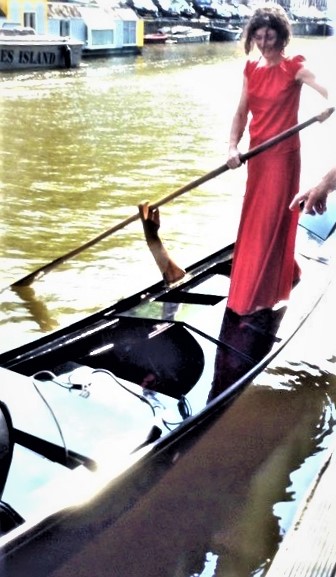 Tirza – The Lady in Red on her gorgeous gondola.

We climbed aboard the gondola that she’d built, loosened the lines, and were off and cruising.  Tirza rowed for a while as we chatted about the various people and boats that we knew.  Her expert command of the vessel was as I had expected.  What struck me about the boat (among other things) was her glossy finish. The Dutch are known for many things.  Along with tulips, windmills, and a remarkable ability to keep the sea out of places, they have really got paints and varnishes down to a science. 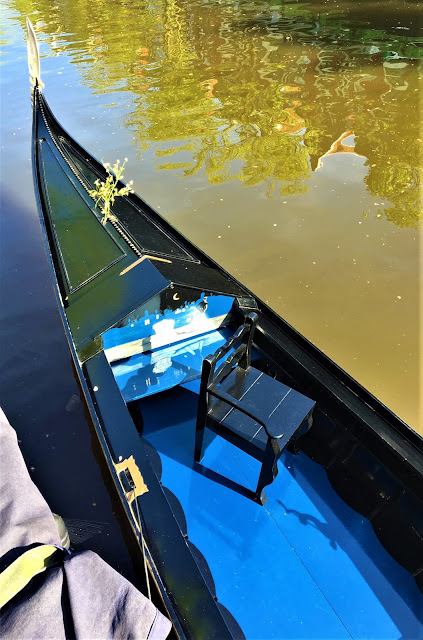 After a while I got the opportunity to step up onto the back and row the gondola.
She handled wonderfully, very much like one of my gondolas back in California.  The winds played with us a little, only enough to make it challenging at times, but every time I needed the boat to do something, she responded as I would expect a Venice-built craft to do.
Navigating the various channels and turns was a fun undertaking.  Often we would emerge from a tunnel-like bridge and have to make an immediate turn or head into a situation somewhat blind. 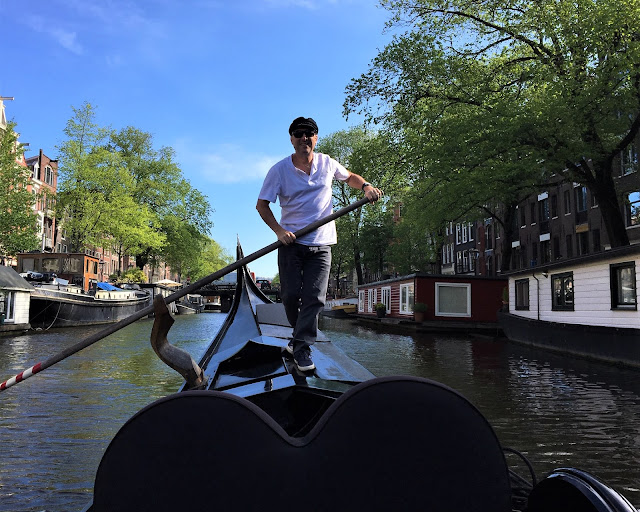 In my opinion, there are a few criteria that determine the quality of a gondola:

From the very start of our journey there were tourboats -- the ubiquitous long and low glass-topped bateaus like you might see in Paris -- but these ones seem to have been designed for this city, with very little margin for error as far as bridge clearance is concerned.  I’m accustomed to rowing around large vessels, but I don’t usually do it in such tight quarters.
As the morning warmed up, we encountered more and more of them, along with all sorts of other passenger boats.  The canals of Amsterdam are quite impressive -- even more so from a boat.  Seeing them from a gondola was pretty much a dream-come-true for me.

Every arched bridge has a series of lights along it’s arched edges.  We were out in the daytime.  I can only imagine how it must look all lit up in the evening.
My time window was coming to a close and we needed to get back to the place where the gondola ties up.
Heading up a wide thoroughfare waterway, I needed to take a left turn into a tight canal which was framed by one of Amsterdam’s small arching bridges.  As we approached and I was just about to execute the turn, a big glass-topped tour boat came rumbling out from under the archway.  I braked hard, turning the gondola to the right as she slowed.  Then I dropped into sotomorso and got out of the way as the whole body of the tour boat came out -- only to pivot counterclockwise in order to line up with another bridge and then continue on up the thoroughfare.
I wheeled around and began my approach again.
Tirza sat at the front of the gondola serving as a lookout.
“Here comes a second one.”
Just like the first one, another big tour boat, which barely fit, emerged from the archway and performed the same pivot-and-go maneuver while I pulled the same moves I’d done a few minutes earlier.
Lining up for try number three, and, yep, you guessed it.
Tirza announced the third giant moving obstacle and I spun the gondola around once more.
At this point we’d lost a bit of time and I was starting to wonder if there was a better route to take, but the fourth time I approached was not thwarted by another tour boat and we were on our way through the archway and heading towards home.  Tirza jumped up and took over rowing while I packed up my things.  She had already called for a taxi to meet me and it was all going according to plan, until … the taxi didn’t show up.  We tried to talk another cab driver into taking me to the ship terminal, but, well, honestly I couldn’t understand what they were talking about (in Dutch).  I was about to hoof it over to a spot where I thought I could hail a taxi (probably a loser of an idea) and Tirza said “Here, get on the back of my bike!”

My Amsterdam rowing adventure had ended,
but the REAL adventure was about to begin.

Just about everyone in Holland has a bike. They’re the most bicycle-oriented people in all of Europe, if not the world.  Many of their bikes have a small book-rack on the back, and some have a cushion of sorts on it.  Next thing I knew, I was seated on this cushion, feet perched perilously on the edges of the fender supports, and holding on while Tirza pedaled barefoot through bike traffic, foot traffic, and even car and bus traffic.
It was a wild ride, and often I couldn’t see ahead because the seat was low and Tirza is taller than I am.

Unfortunately, as I was hanging on at this point, there are no photos for the bicycle portion of our adventure.

I learned more about Dutch people and their bike culture in that crazy ride than I thought possible.  At one point we were speeding towards a railway station when a clueless tourist with his face in his cellphone, stepped in front of us.
I saw it coming and instinctively shouted “HEYYY!!!”
He got out of the way just in time
(and learned a little about Dutch bike culture as well).

My friend Tirza, who had been so accommodating with her boat, really went above and beyond to help me get to the terminal.
We arrived in record time, and I walked in with about a minute to spare.

I have been lucky enough to row gondolas in many places over the years, but my morning in Amsterdam was by far one of the most memorable experiences -- both on the back of a gondola...and the back of a bicycle. 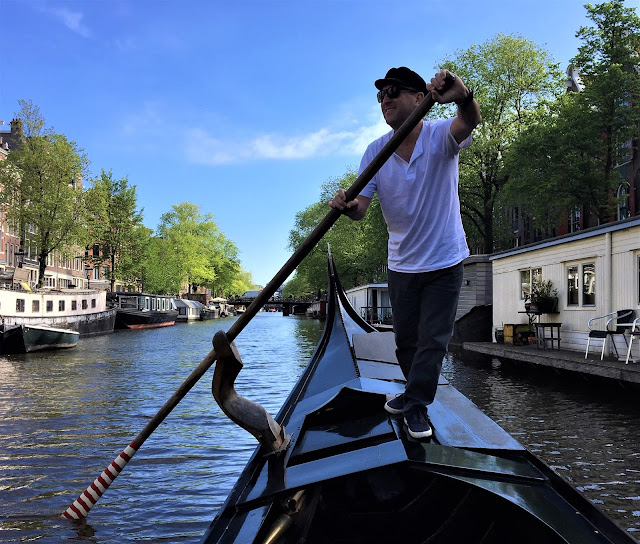 Brilliant post! I learned a lot about the small boats or the gondolas as they are locally called. I recently cleared my Netherlands Visa Appointment with the embassy. Even before that, I prepared a small reference itinerary but never included riding on gondolas. However, after going through your blog, I feel like should add this to my list of to-do activities while exploring the Netherlands.