Stickers - Lots and Lots of Stickers!

When I first saw photos of the gondola in New Jersey,
I knew that if I bought her, I'd be doing a lot of picking and peeling.
The boat was practically covered with sponsor decals.
Some of them were simple vinyl lettering,
others were of the more heavy duty variety.
When we reached an agreement and sent payment,
I stopped clipping my thumbnails.

After the 2009 expedition down the Hudson River, I'd come home with a boat that had the same kind of decals - so I knew what I was in for. 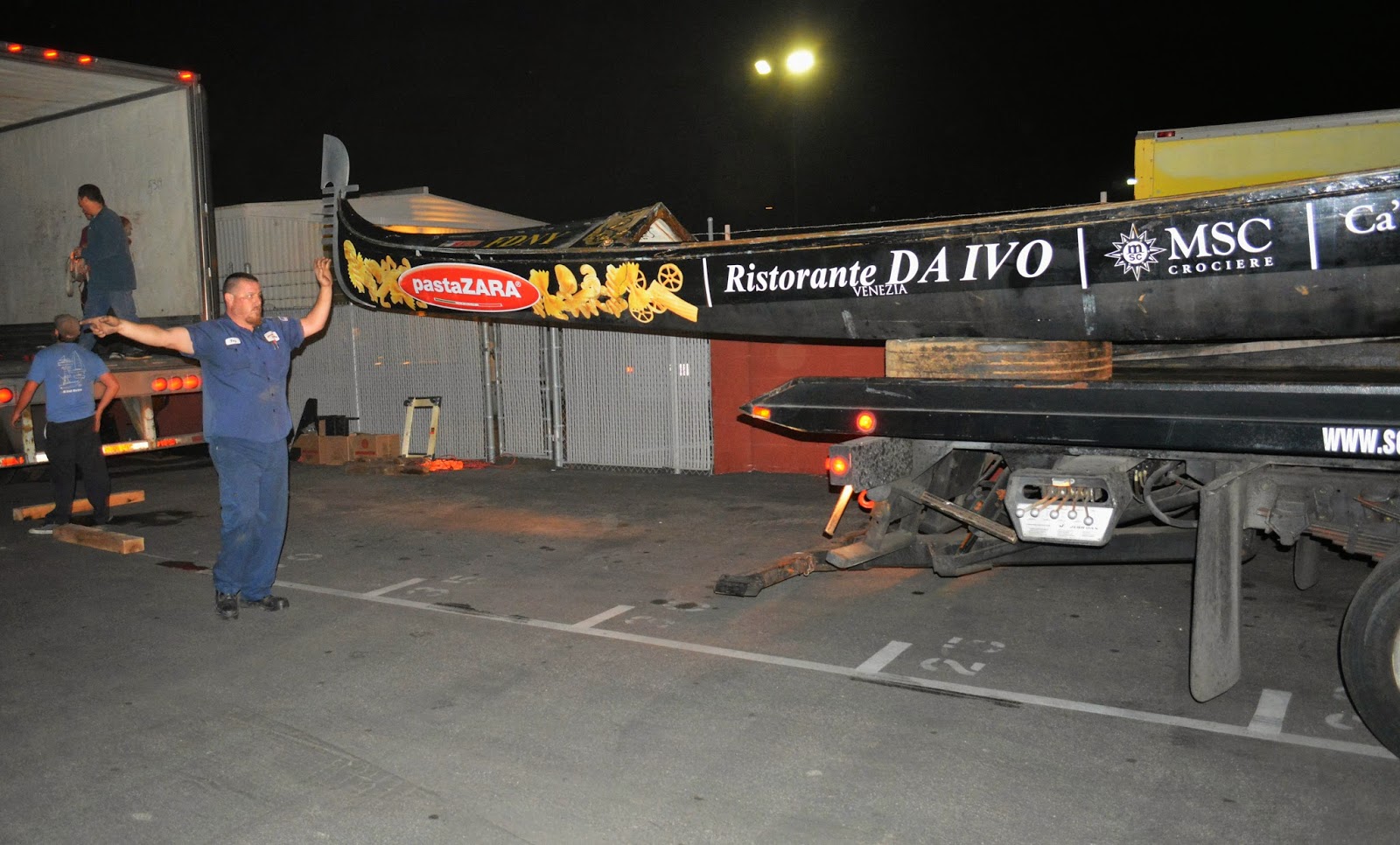 When the boat came out of the container, and the tow truck operators were getting ready to lower the boat to the ground, I grabbed hold of the big red "pastaZARA" oval and began pulling it off of the boat. 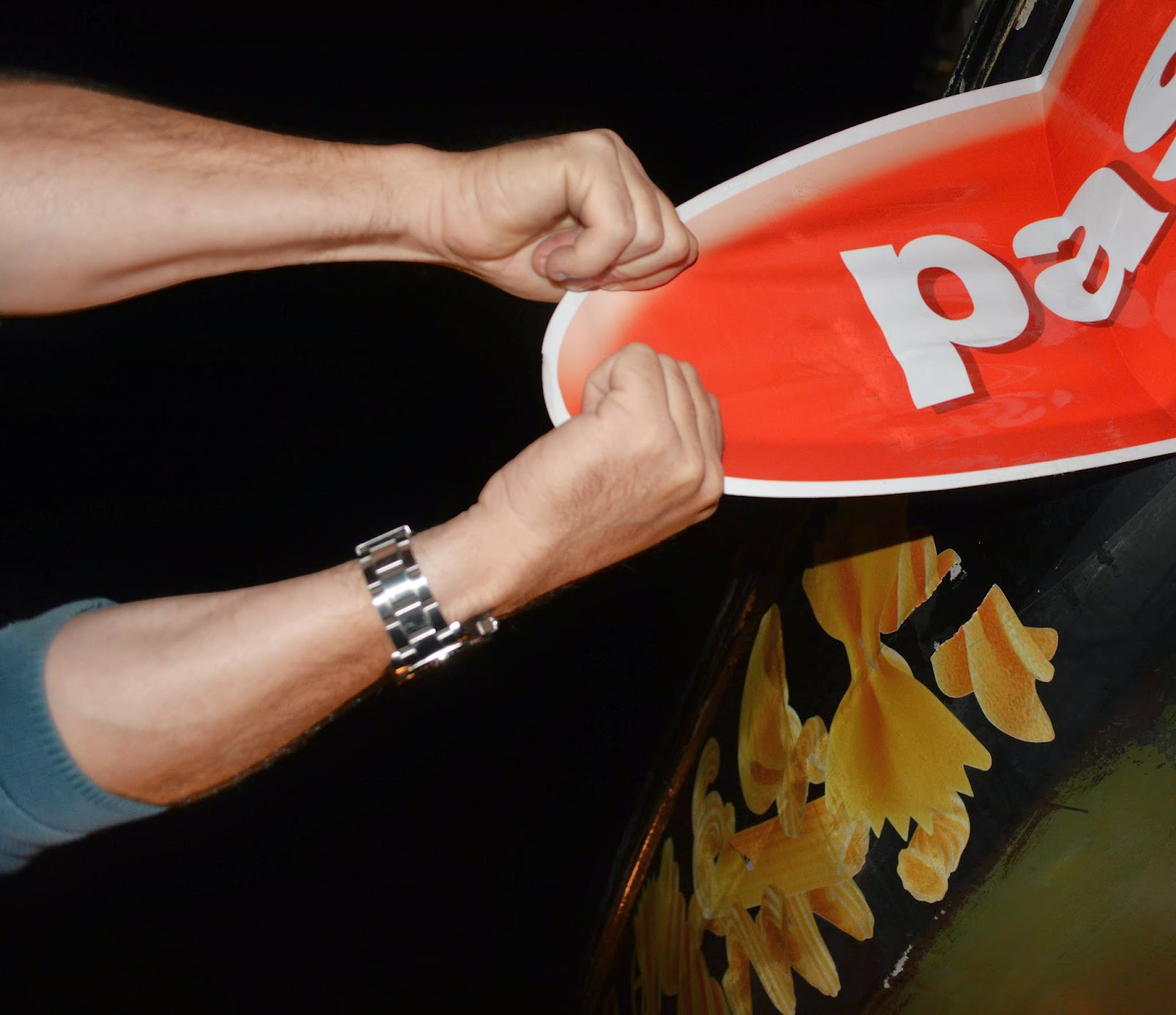 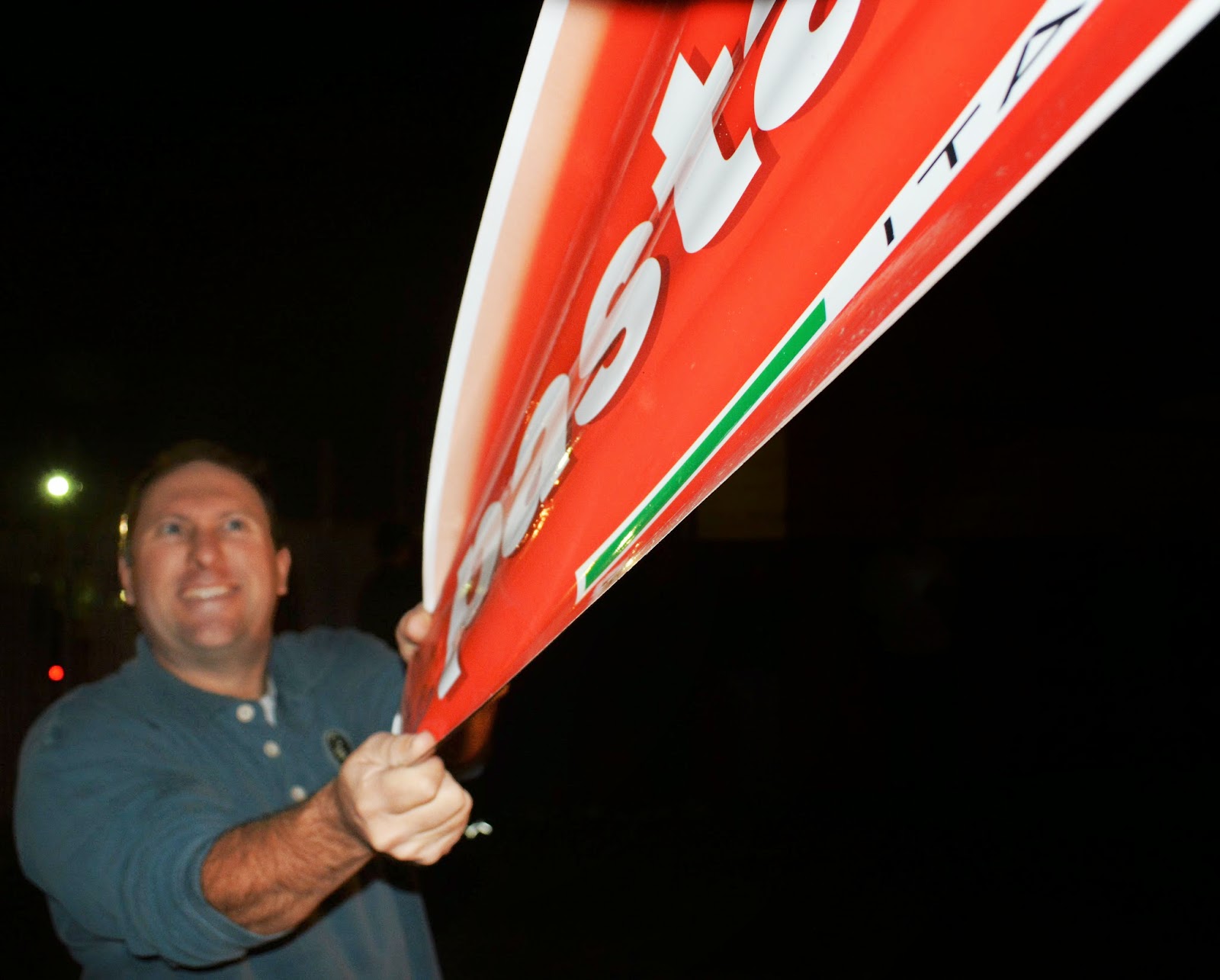 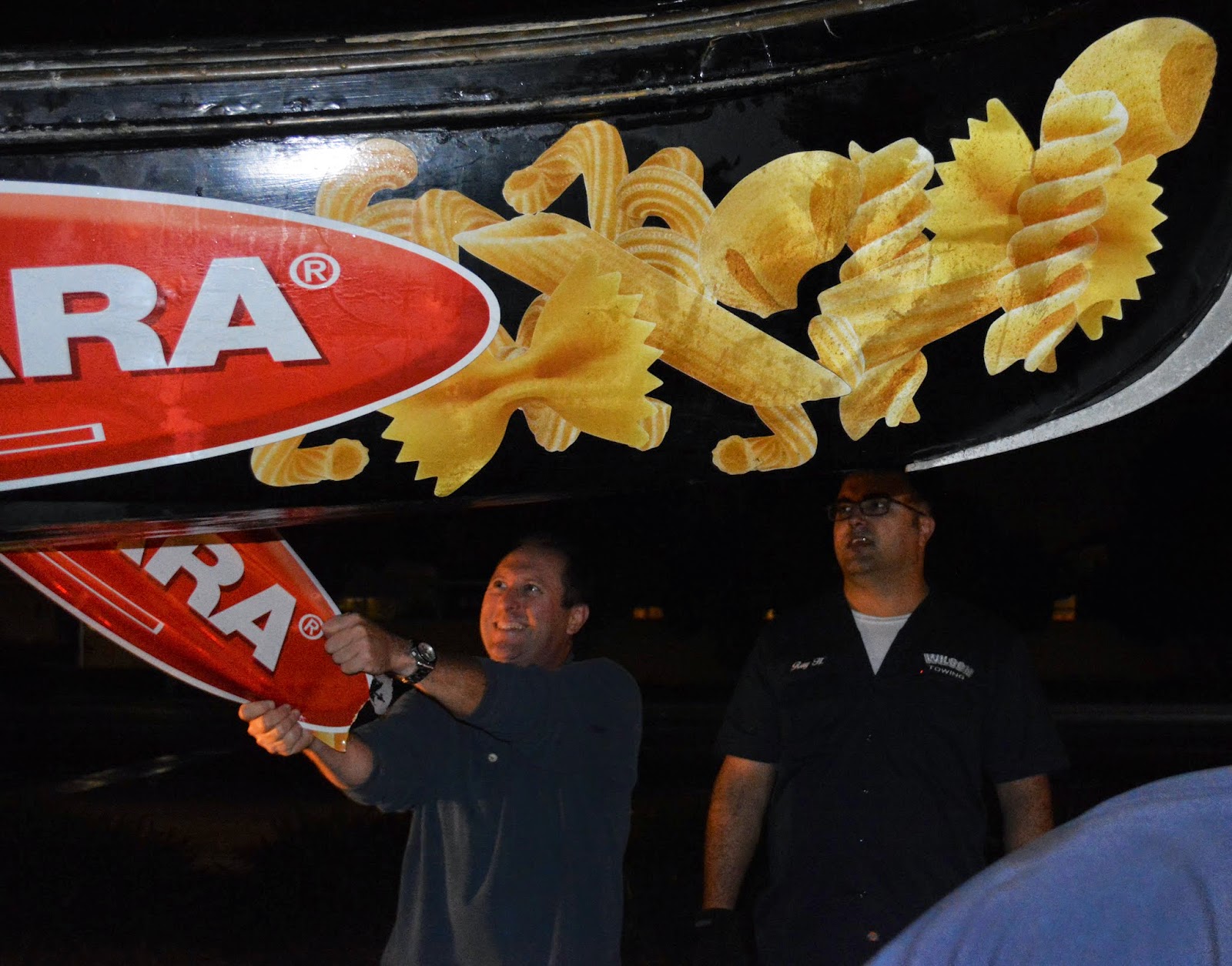 Later, one of my gondoliers, Konner, was the unwitting owner
of a big shiny red "pastaZARA" cummerbund. 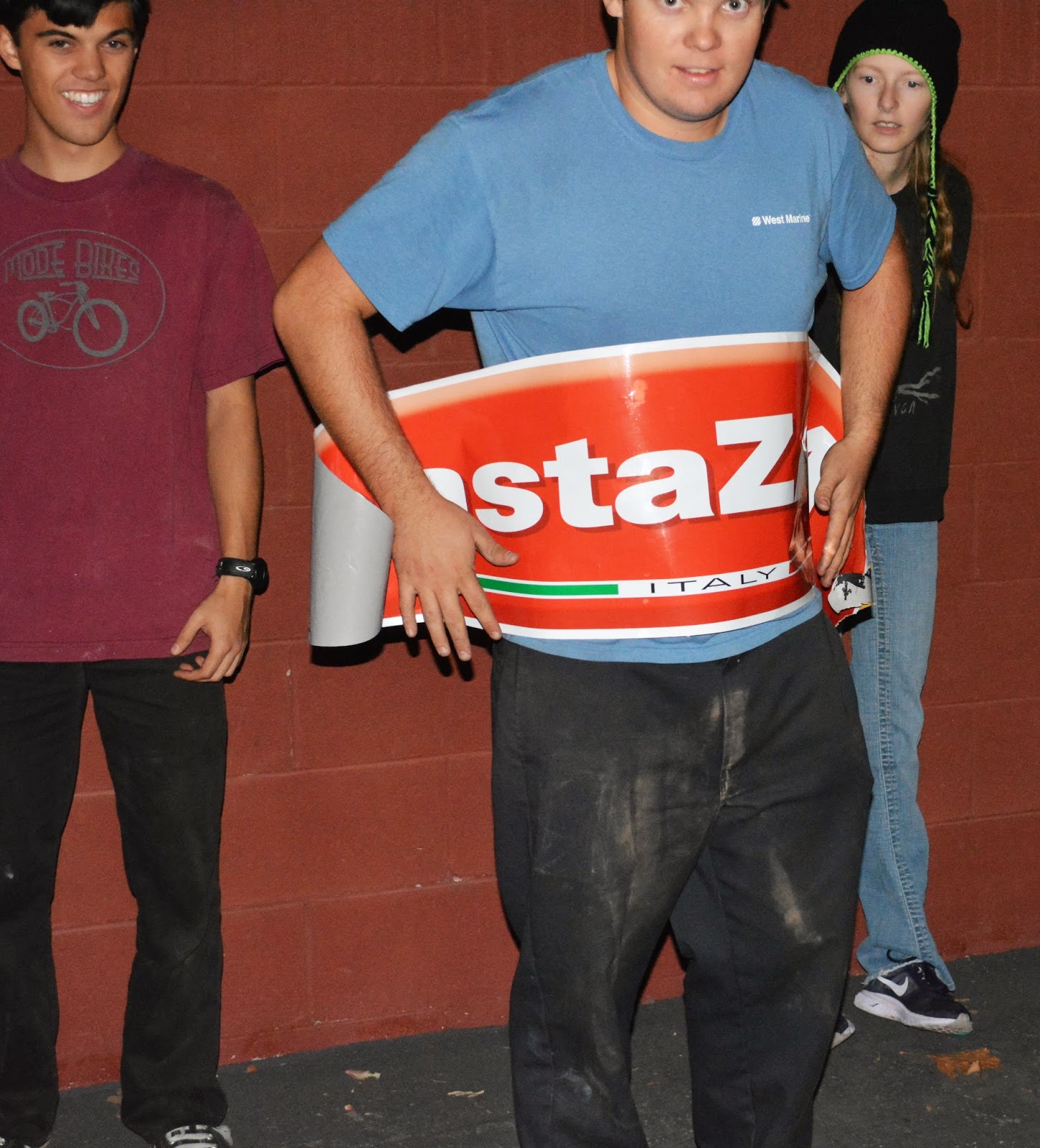 I wonder if he'll wear that to Prom.

Not long after, Konner returned the favor by adorning my SUV with the same huge sticker (sorry, no photo available).

As the days went by, I stopped by the yard to peel a little here and a little there.  I brought people with me and even considered posting an ad on Craigslist inviting "anyone who likes to pick at things", or perhaps
"anyone who ignored the words 'if you pick it, it will never heal'".

In the end I just showed up and picked away for two hours yesterday and four more hours today, and the sticker peeling was done.

My thumbnails were long, gross,
and remarkably useful.
My wife and daughters were so proud and impressed that I'd grown them out.

I, on the other hand,
just couldn't wait to cut them.

Another great tool
(besides my thumbnails)
was the X-Acto #18 heavyweight wood
chiseling blade.

Turns out that it's perfect for getting under a corner to start the sticker-removal process.


I chose to leave the two flag stickers on the tail section for now, as a reminder of where the boat came from, and the unique history she carries with her.
The big noodle decals on the bow were quite thick.
I imagine they were the type usually stuck to the sides of delivery trucks.
Most of the pasta pieces were joined together in one large decal, but there was one loose cavatappi noodle that was fun and easy to pull off. 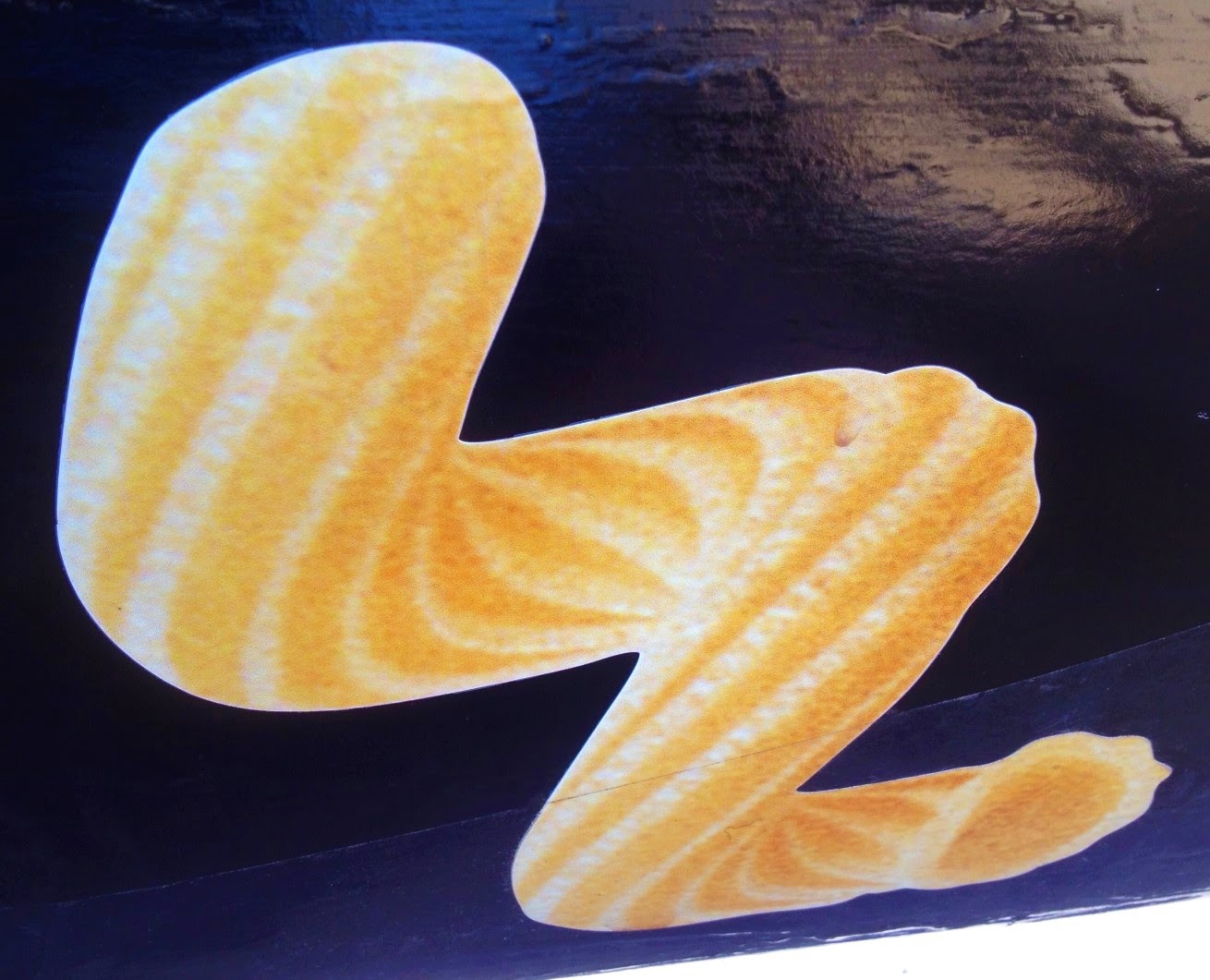 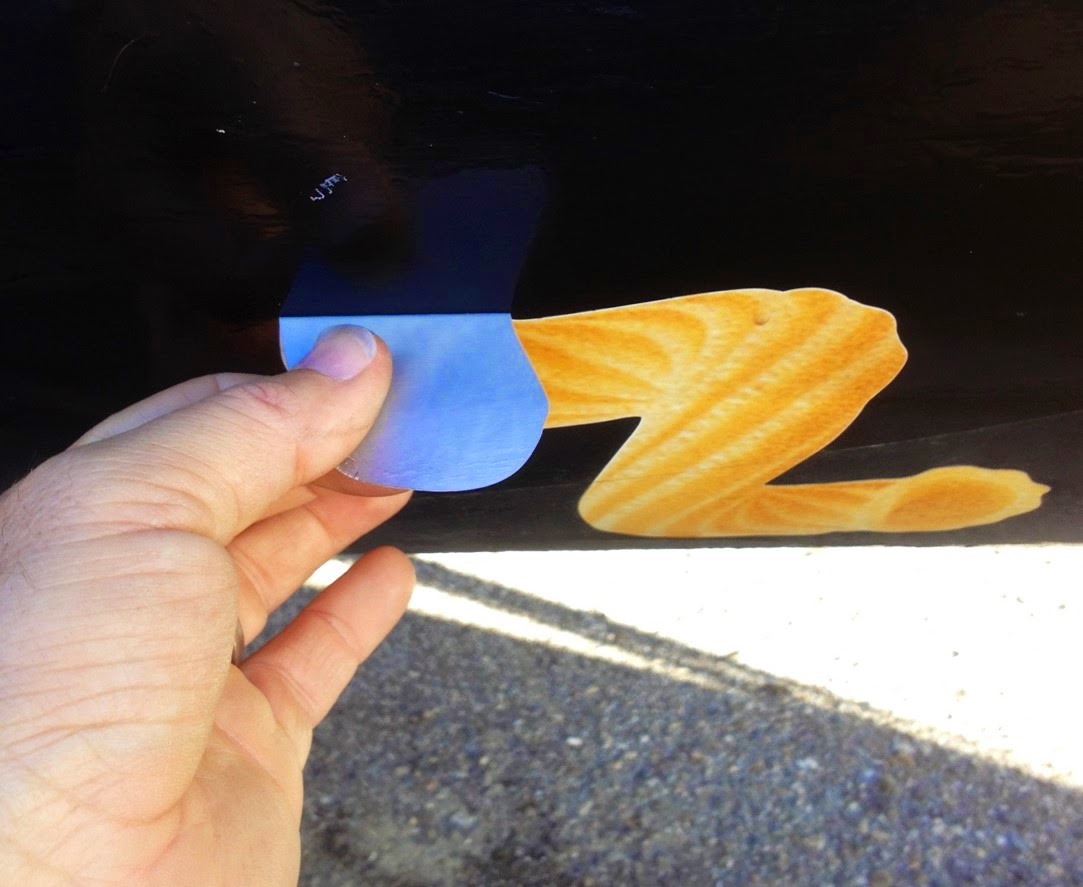 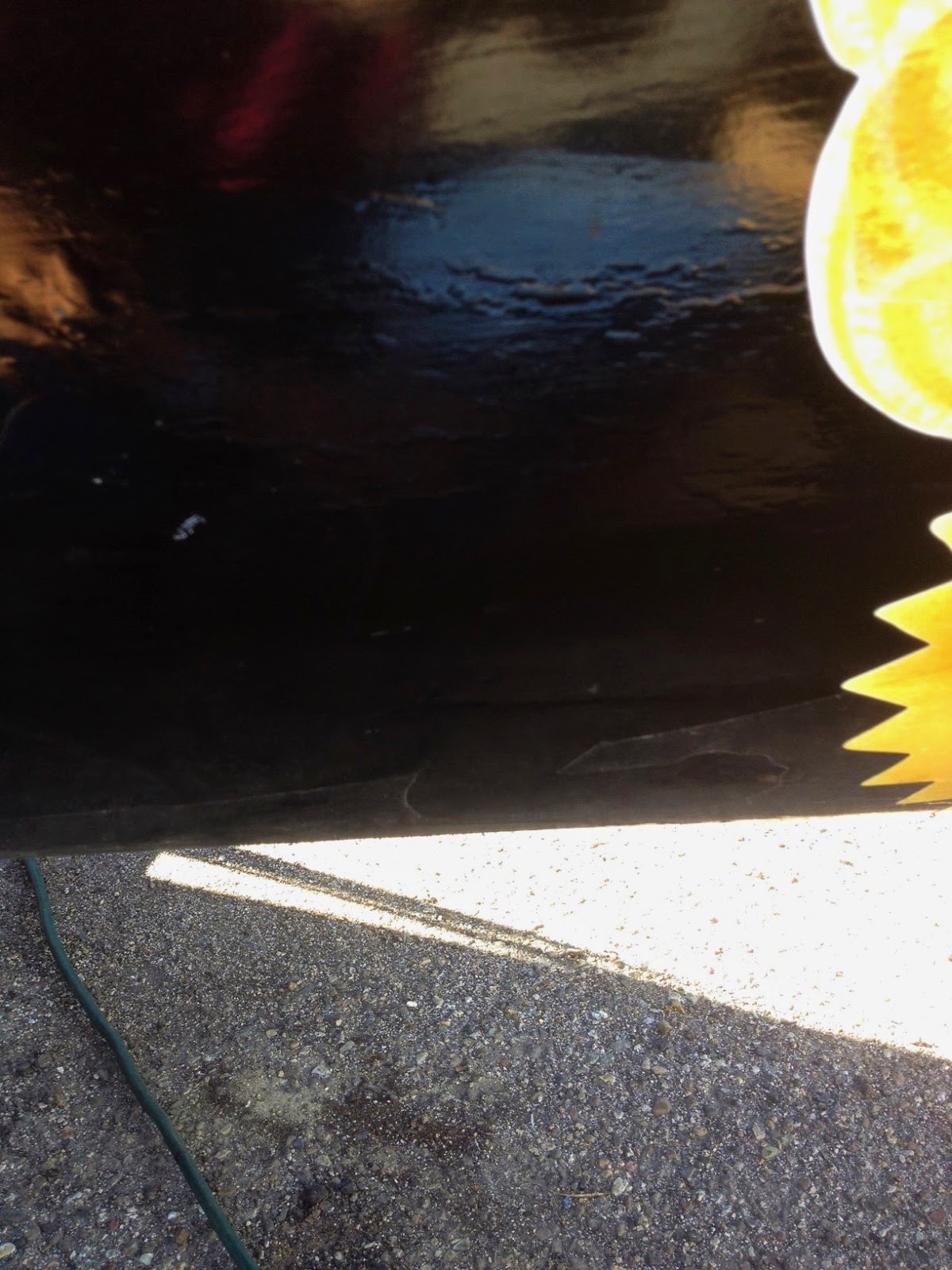 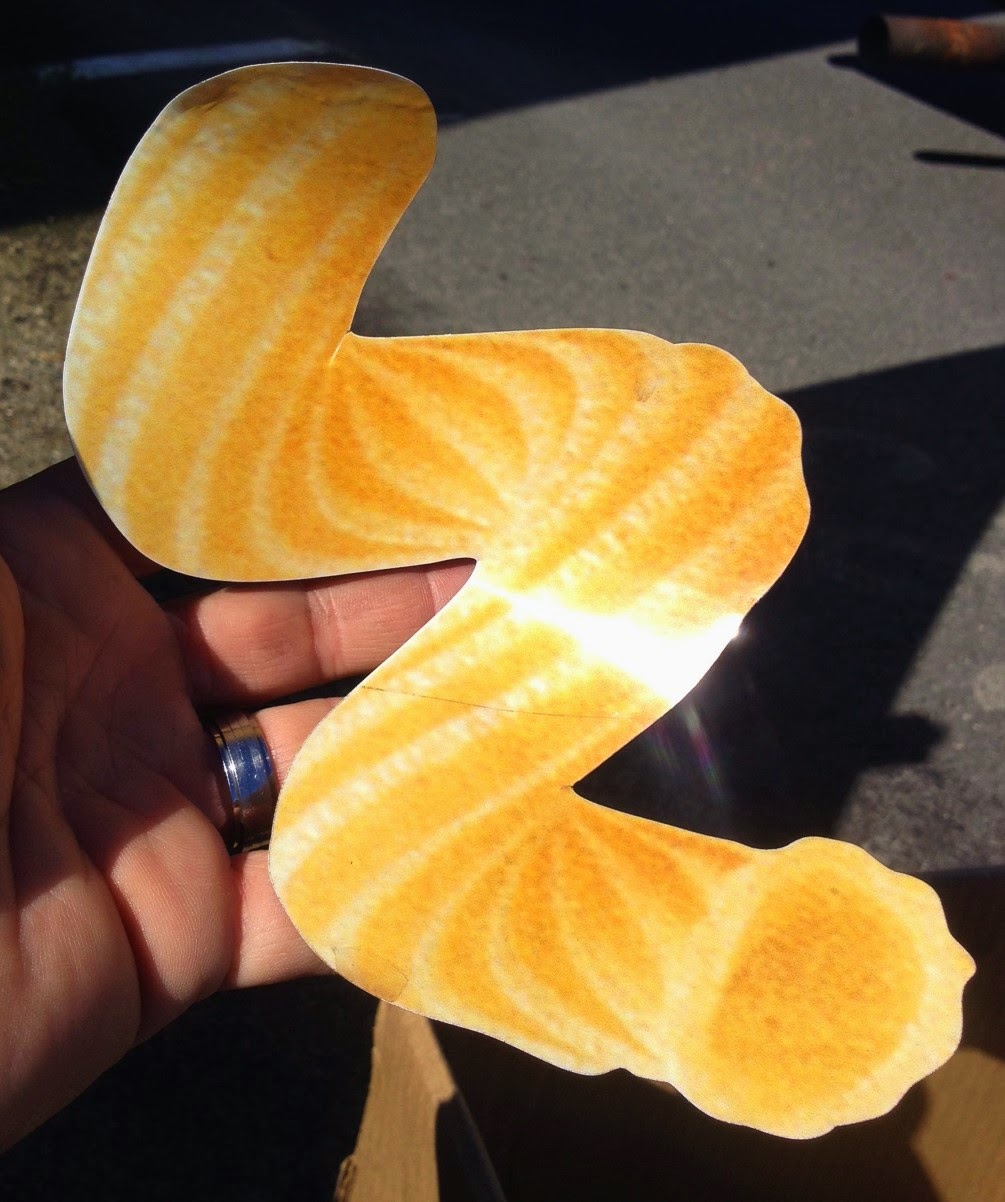 Now, who can I stick this huge noodle sticker on?

Many of my friends have told me that I "really should leave the stickers on".
They like the big noodles, the patriotic FDNY, or just the overall look of the boat with race car-like decals.  I've been told that if I left them on, people would always ask about the stickers and then the gondolier could regale them with stories of the expedition.
But my choice to pull them off was made long ago.
I already did the math on that decision back in 2007,
when the Phoenix came back from New York all stickered up.

This morning, after four hours of crawling around the boat and sitting on cardboard, I picked and peeled the last decal off the boat.


Here's a before and after look at the bow. 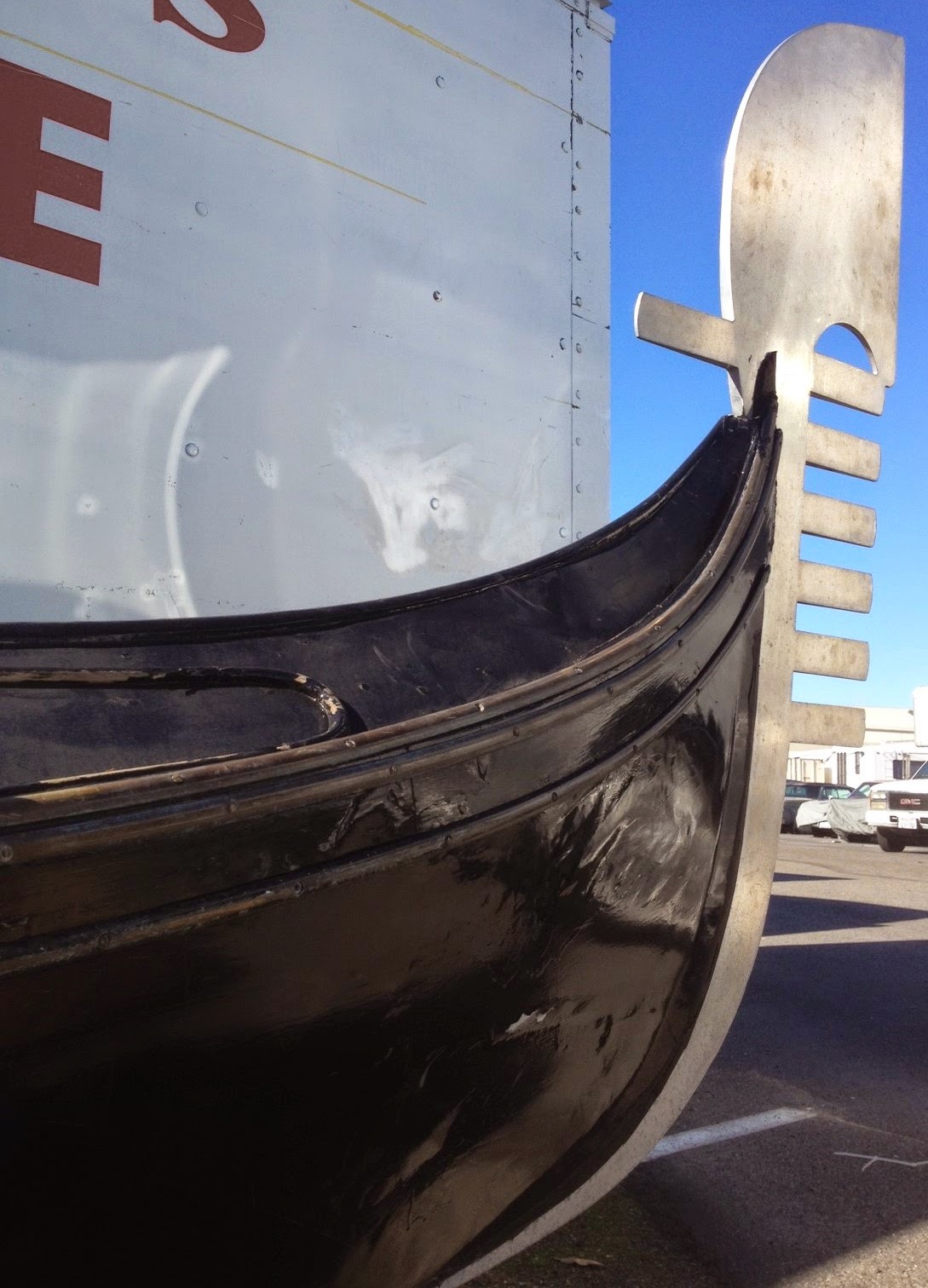 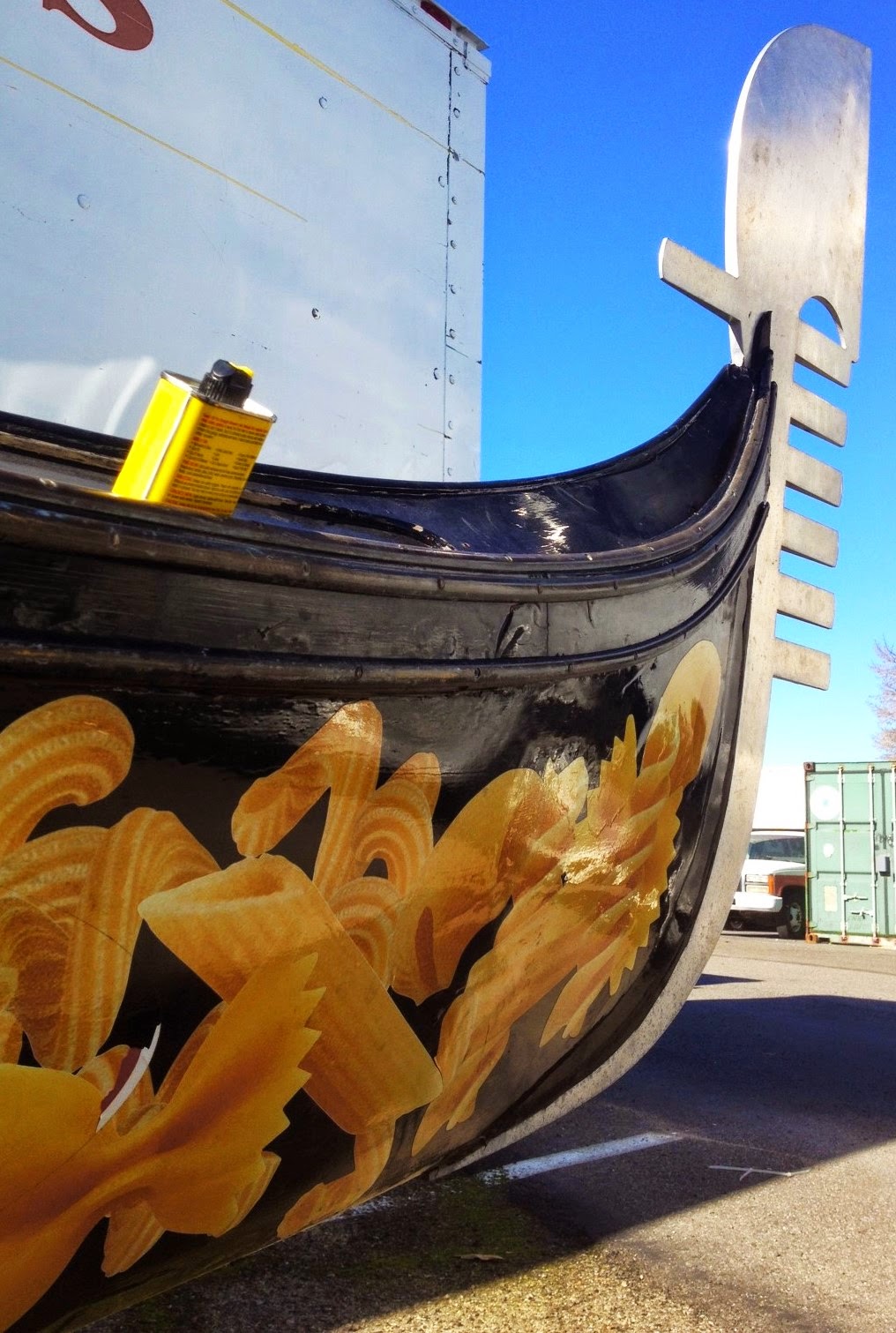 Yes, yes, yes, the pasta decals are pretty fancy, but folks don't book cruises with me to ride in a boat that has giant noodles and sponsor decals all over it.

I packed up my Xacto knife kit, checked off "peel off all decals" from my big list of things to do, drove home, and clipped my thumbnails.

I think maybe I'll go find Konner's truck tomorrow...
...and stick a big noodle decal on it.
Posted by Gondola Greg at 10:30 PM