The "Rugby Team" Approach in Action 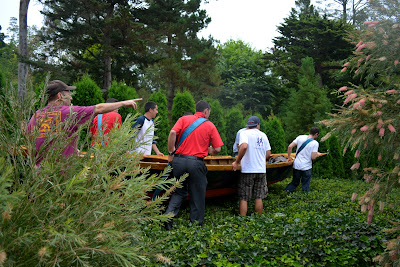 On Sunday morning, July 28th, My wife and I arrived at a very unique and beautiful garden in the Santa Barbara area: Lotusland in the city of Montecito.  We'd been contracted to provide a boat for a special event they were holding later that day.

A lot of research, planning, and preparation went into this before we even arrived with the boat.  We'd visited the location, took measurements, photos and video.  We'd met with the staff there and came away with a clear understanding of both the garden, and their concerns about such an unusual thing as dragging a boat through it.
I believe strongly in having more than one plan.  We had a Plan B, a Plan C,
and a semi-pathetic Plan D.  Thankfully, Plan A worked.

Tamara Jensen at I.D.O. Events was our contact, she and her staff were a joy to work with.
The staff at Lotus Land were consummate professionals - they love their location, but were patient with us, knowing that we too would soon understand how special the place was.
To learn more about the property and the rich history of the grounds,
visit www.lotusland.org


For any boat moving job, there are options.
I've gone over some of them here before.
There's the hoist,
there's the forklift,
and then there's my favorite: the "rugby team" approach, also known as the "Samoan family moving method".  This method requires people, people who aren't afraid to do the heavy lifting.
Why do I like it so much?
Well, there are several reasons, among them are:
1. you're not relying on any one piece of equipment (that can fail)
2. it allows you to cover uncertain terrain
3. the boat usually stays fairly close to the ground (and therefore, no Humpty Dumpty).
The boat we used on this fine day was the Pupparin known as the "Contessa" -
a beautiful boat that I bought recently from Tim at Sunset Gondola.
Along with the boat, Tim also gave me a simple but effective two-wheeled cart.
Those measurements we took on a previous visit were not just to see if the boat would fit, but also if the cart would.  The folliage along side some of the trails in Lotusland is not to be stepped on, so getting four or five guys on either side of the boat was not an option in some places.
On this cool, overcast morning, I was fortunate enough to work with some great guys who were not afraid to do some of the heavy lifting.
Never underestimate a valet parking guy - these guys are in shape.
The ones I worked with were all valets for the event.
Signature Parking was the company, and the guys did a great job.
So here are the pictures: 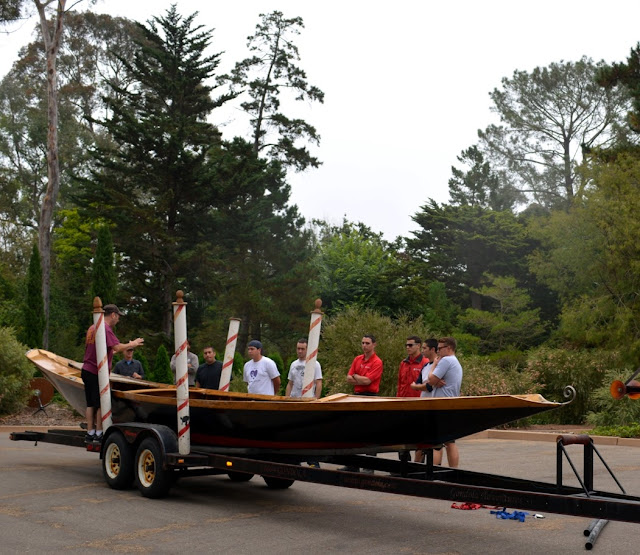 The briefing.
"Don't grab this part, do grab that part.
Don't grab your buddy, do grab the boat.
Most importantly, don't drop the boat...
especially not on my foot." 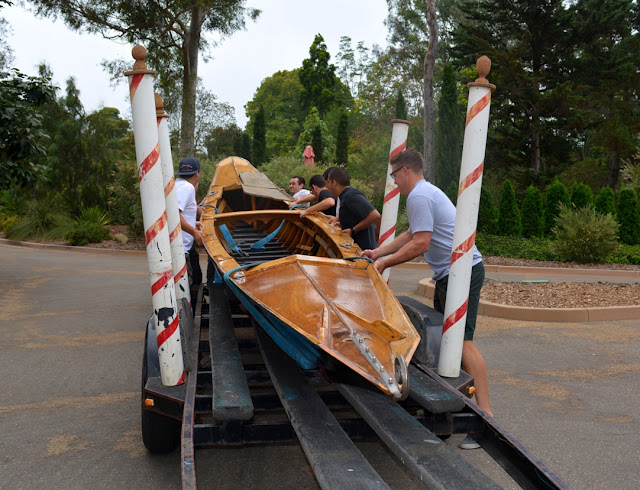 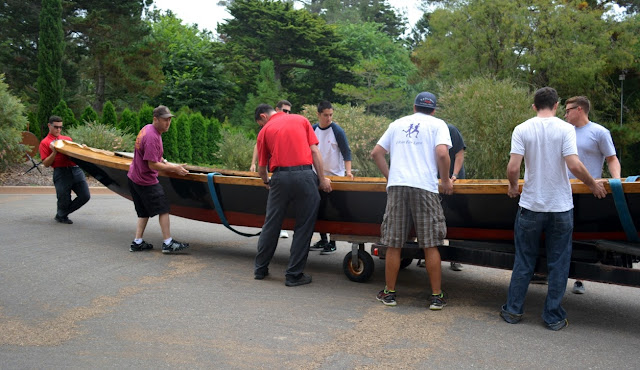 Placing the boat on the two-wheeled cart. 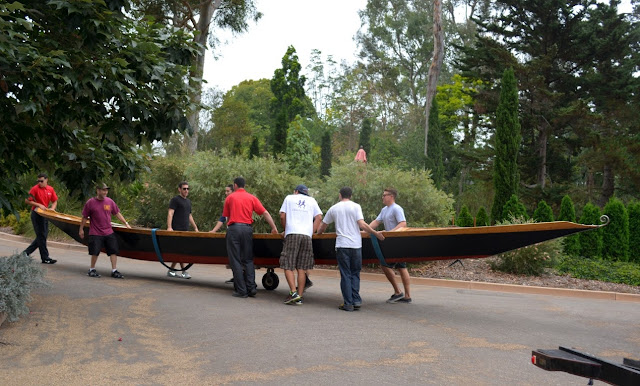 Rolling the boat into position
to "launch" her into the wilderness. 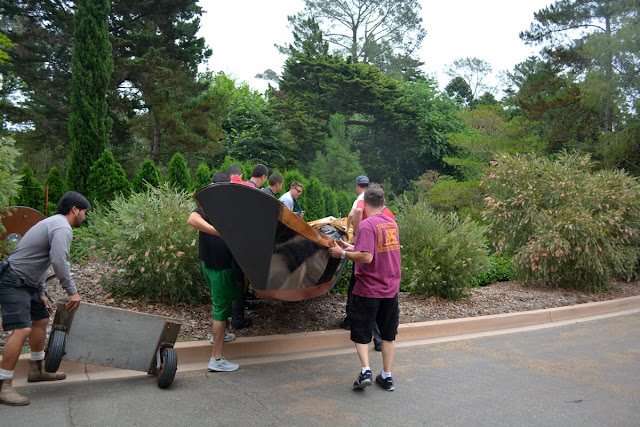 And off we go, into the wild! 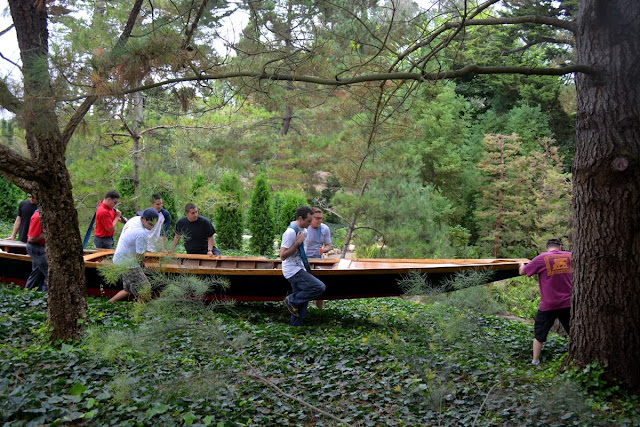 Over the ivy and through the trees. 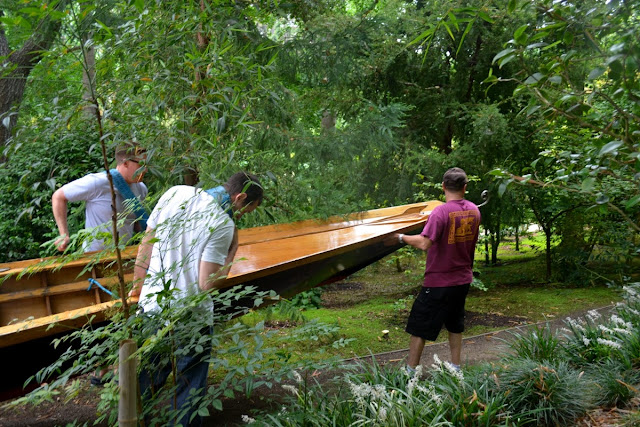 We followed a narrow path through the
lush green Japanese Garden
portion of the property. 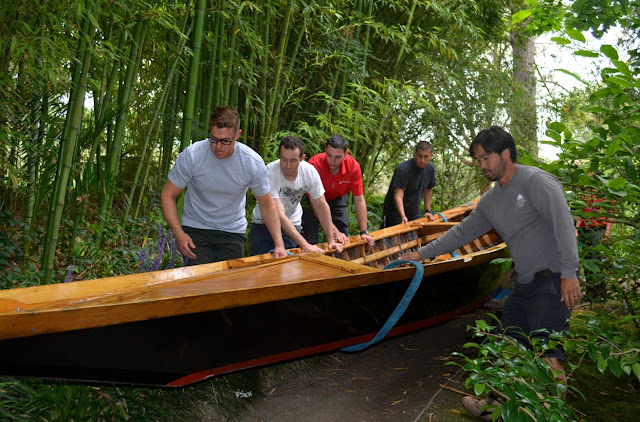 At this point the boat was on the cart once again,
and the guys did their best to keep her on-course. 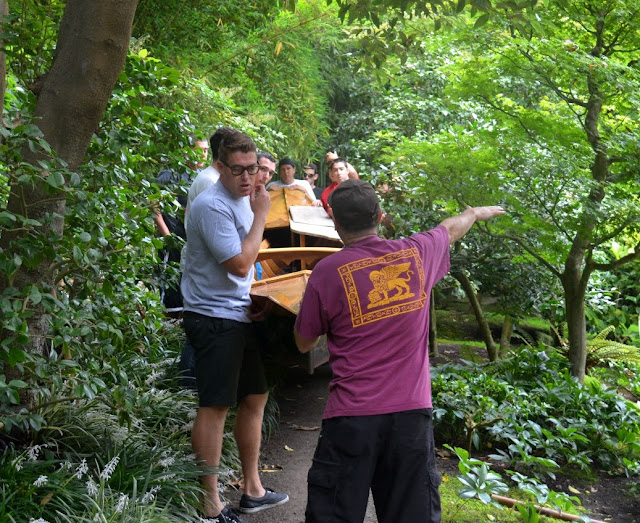 Stopping to give some directions. 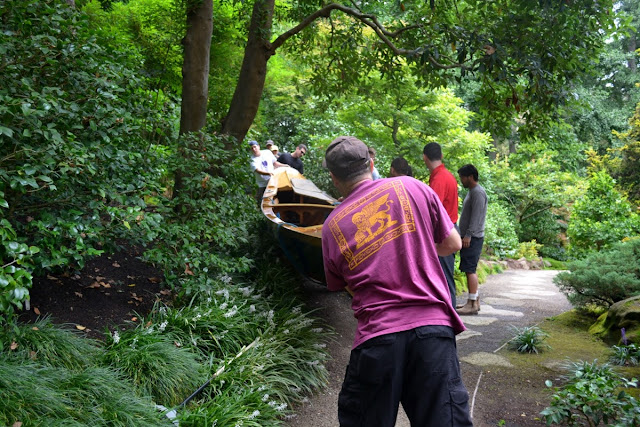 Getting a firm grip on things. 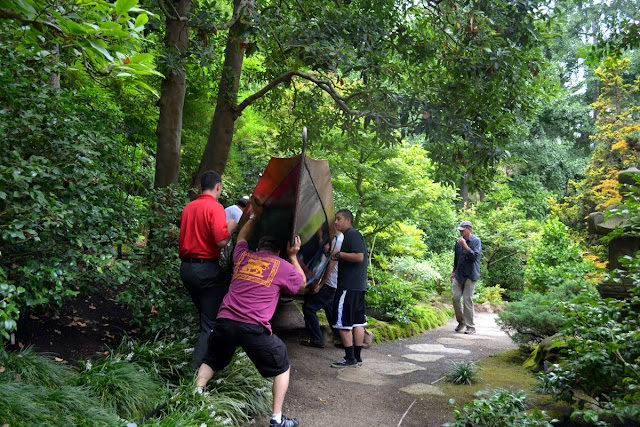 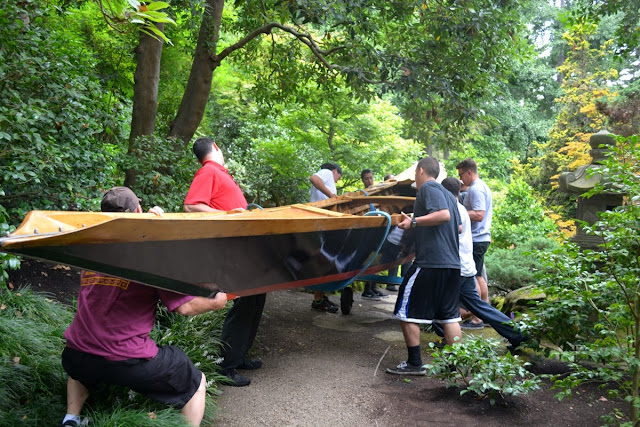 We lifted the boat over a tight corner and placed her back on the cart for the final approach to the water.  Yes, there was water.  Why else would we drag a boat through the forest? 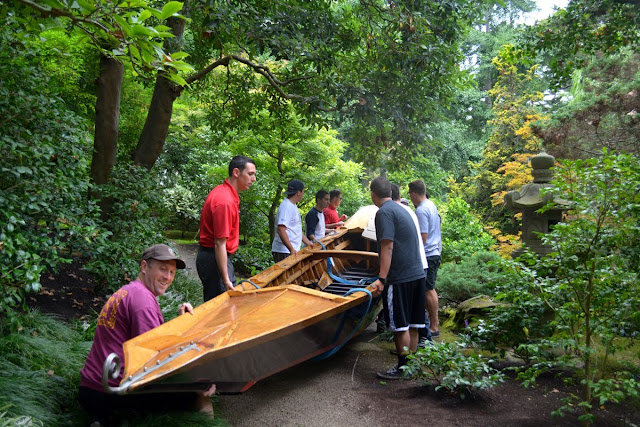 Talking to the boat.
Mhmm, I do that too. I'm weird like that. 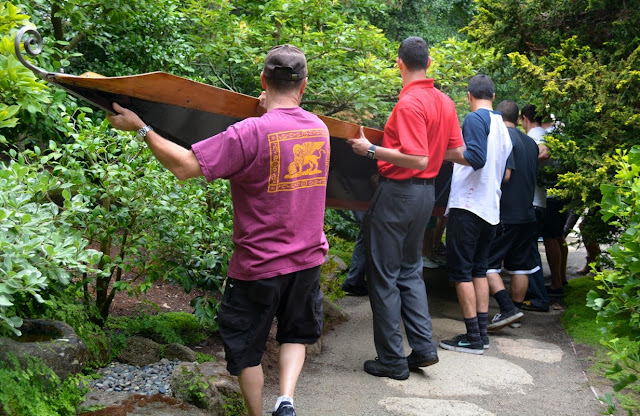 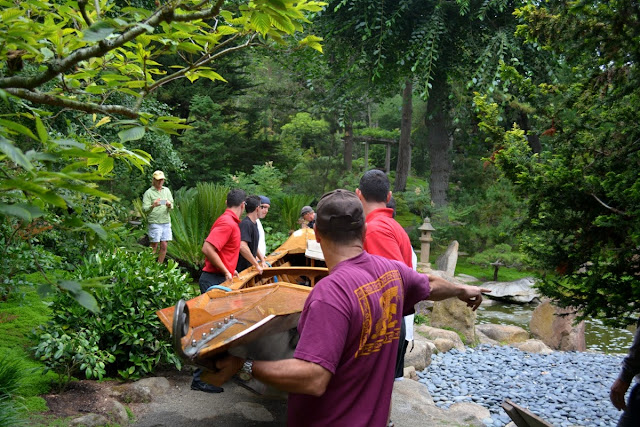 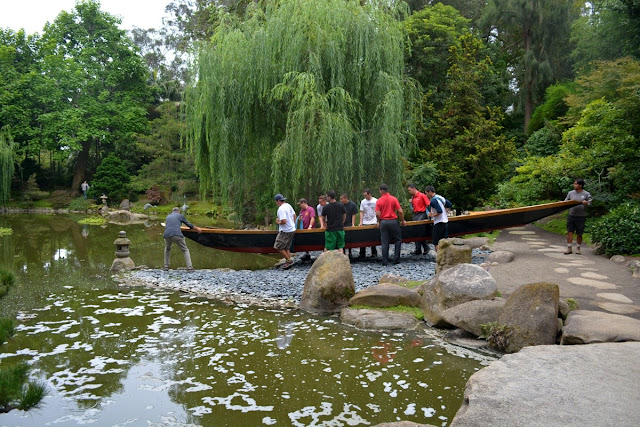 Lining up for launch. 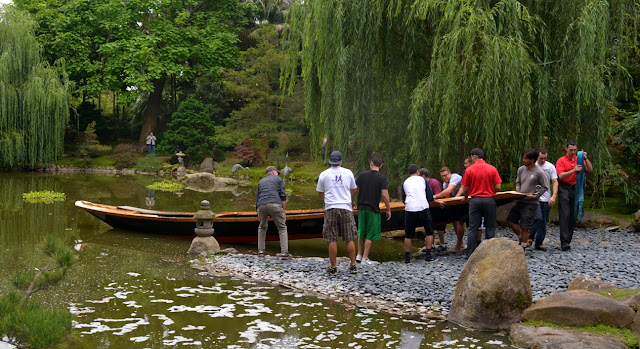 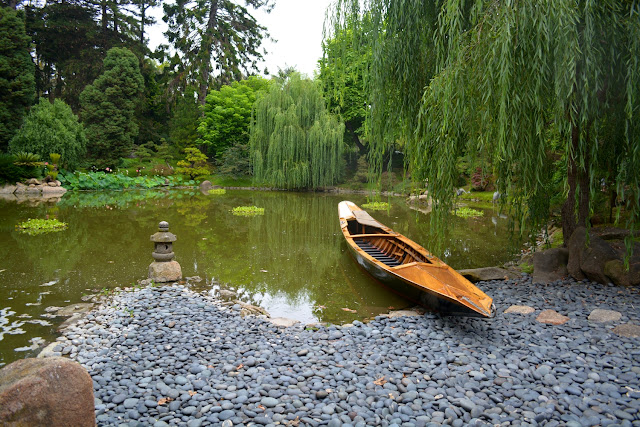 Mission accomplished.
The whole operation went smoothly,
and took a lot less time than we'd set aside.
I must take a moment to give credit where it's due.
The guys from Signature Parking who made it all happen were:
Ansari Boumediene
Daniel Escobar
Ryan Gallegos
Lucas Goldberg
Eddie Grichanik
Kevin Ledig
Jared Samakosky
Rafael Sierra
and Alex Willett
Lotusland staffers Mike Iven and Greg Kitajima were instrumental as well, providing both brains and muscle.
Next up:
Part 2 - on the water.
For more fun reading about the various methods of boat moving,
see my post "Not Dropping the Boat" here on the Gondola Blog.

Cool shirt. I was just about to make some just like it. Send me one, eh?

> I believe strongly in having more than one plan. We had a Plan B, a Plan C, and a semi-pathetic Plan D. <

Was one of those plans about using a helicopter lift?