Elisa Picks Up an Oar 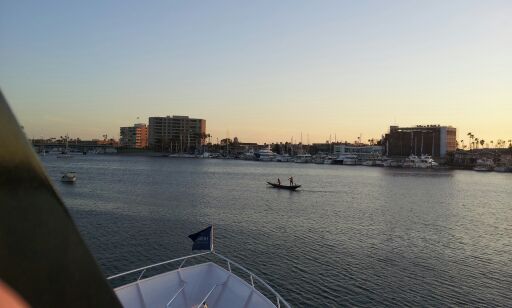 I was setting up the pupparin for a tandem row when my friend Lars Berg came down the gangway.  He was in his captain's uniform and heading for one of the large charter vessels - the M.V. Just Dreamin'.
Lars is one of my favorite people to run into, and unfortunately we rarely cross paths anymore.
Many years ago, Lars was my right-hand-man, helping me maintain the gondolas and also taking out cruises.  Now he's a "big boat captain",
and I am thankful that at least one of the guys who drives those huge vessels understands things from a gondolier's perspective.

So as I was talking to Lars on the dock, I told him:
"believe it or not, I'm about to go rowing with Elisa"
(Elisa, of course, is my wife)
Lars responded with a smile "I'll believe it when I see it".

I've been on the back of a gondola now for twenty years, and you'd think that by now she would have learned the art of voga-alla-Veneta.
My wife has described herself as being "allergic to exercise",
so I was more than thrilled when she agreed to try out some team rowing on the recently acquired pupparin.

On Monday we went out with our two daughters and tried a four-oar row.  Things were a little sketchy, but we didn't crash into anything.

This evening, however, it was just Elisa and me.  She tried a few different things, I did my best to instruct and encourage, and before I knew it, we were rowing well in our two-oar configuration.  She did so well.
Right about then, my buddy Lars stuck his head out of the pilothouse to let us know he was about to leave dock (he and a 110' motor yacht).
As he pulled out he snapped another shot. 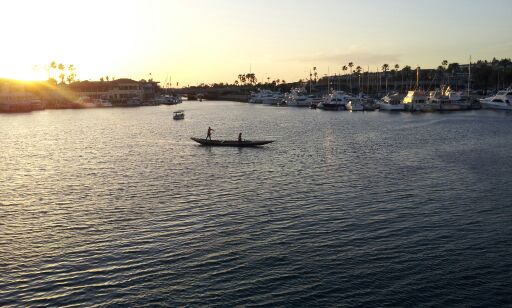 It may not be the most clear photo, as it was shot with a phone from far away, but it is living proof that Elisa has stepped on the boat and picked up an oar.

Her shoulders are a little sore.
I for one, couldn't be happier.
Can't wait to get the whole family rowing.

Thanks for the photos, Lars.

BRAVA Elisa!!! can't wait to see you all in Venice for a "family row". Nereo