A Lesson with Row Venice 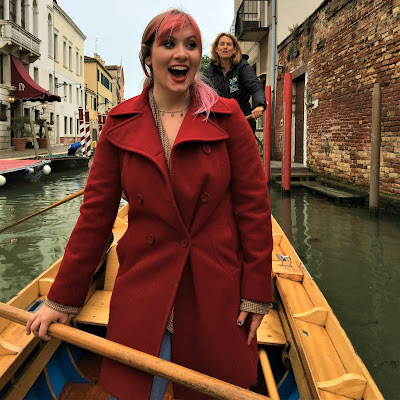 Anybody who knows me, knows that I'm a huge fan of Row Venice.
Call it a company, an organization, a cultural installation.
I call it the very best way to see Venice,
while learning something that is truly Venetian.

Founded by Australian expat Jane Caporal,
Row Venice is described on their website ( rowvenice.org ) as:
"...a non-profit organization of passionate women and expert vogatrici, Venetian by birth and by choice.  We are dedicated to the preservation of the traditional Venetian cultura acquea and at its center, the voga alla veneta, the Venetian style of rowing: standing up, facing forward, native to Venice and made iconic by the gondoliers."

Over the years I've had the pleasure of meeting some of the Row Venice staff, who not only give lessons on the Row Venice boats, but also compete in the various regatas in the lagoon while wearing Row Venice gear.

Until my recent visit to Venice,
I had yet to meet the founder herself - Jane Caporal.
We communicated via text a few times and, despite the threat of rain
(which had been making annoyingly regular visits that week),
Jane agreed to give my daughter Isabella a lesson on one of their batelas. 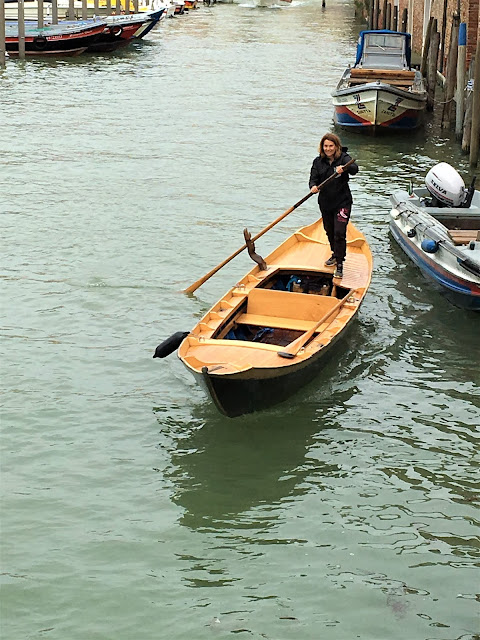 Standing on the Ponte della Sacca bridge, I spotted Jane approaching,
we had a brief conversation as she was about to slip beneath the bridge. 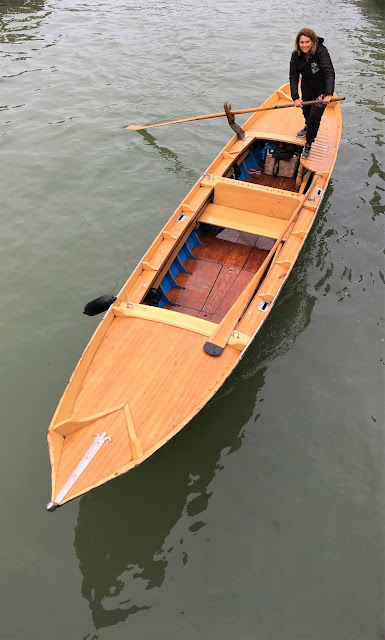 A cheerful smile despite the threat of rain. 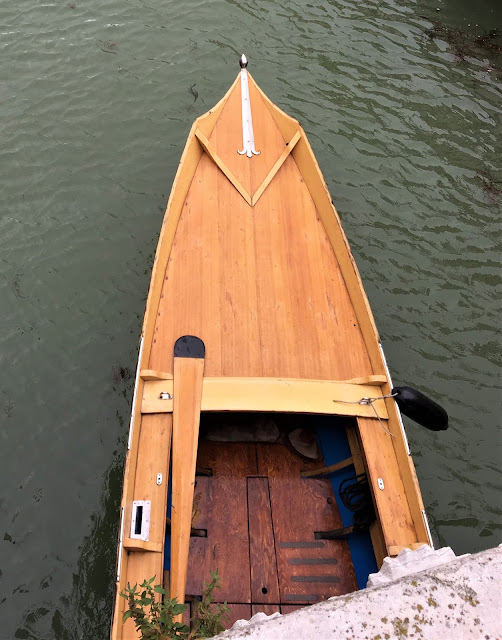 Emerging from under the Ponte della Sacca. 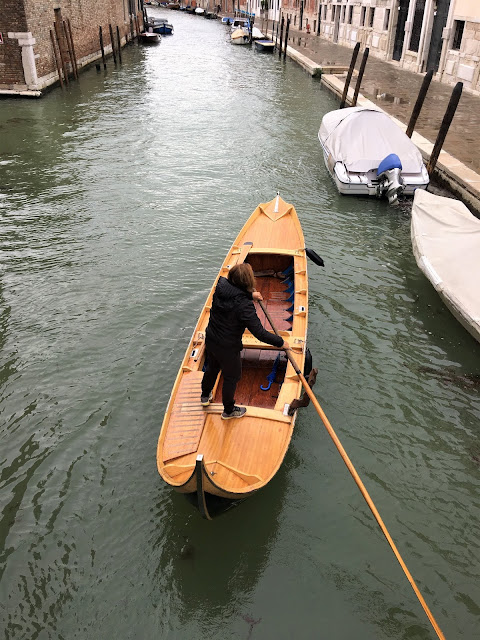 Lining up to moor at the Fondamenta Gasparo Contarini. 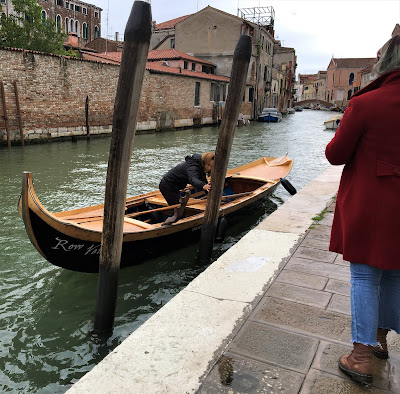 ...and making contact.
Jane tied the boat up and began with some basic terminology.
She showed my daughter how rowing the front station was done and then got her to try it while the batela was still moored to the fondamenta. 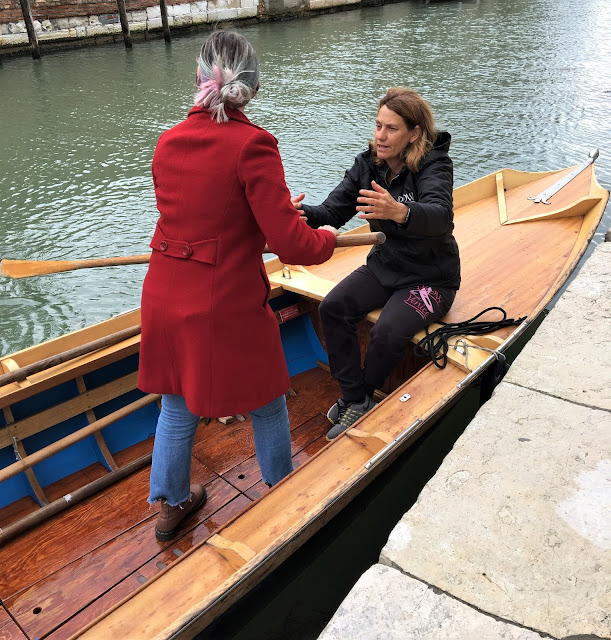 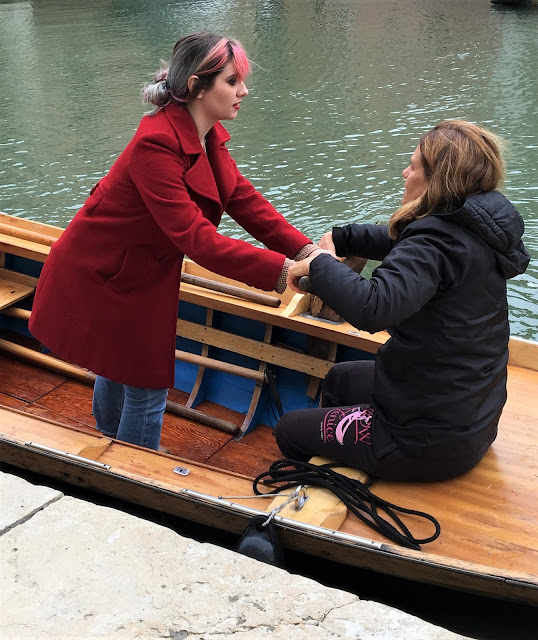 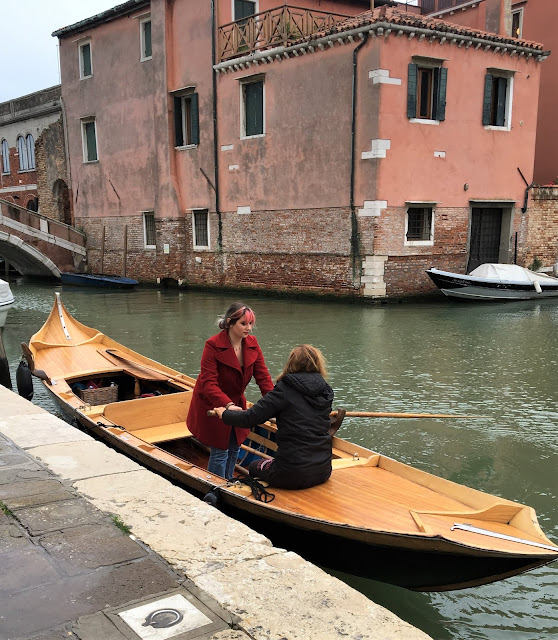 Once Isabella had an idea of how it was done, Jane loosened the lines and we were off.  My daughter rowed up front, Jane captained from the back, and I snapped some photos and did my best to keep my mouth shut and let the expert teacher do her thing. 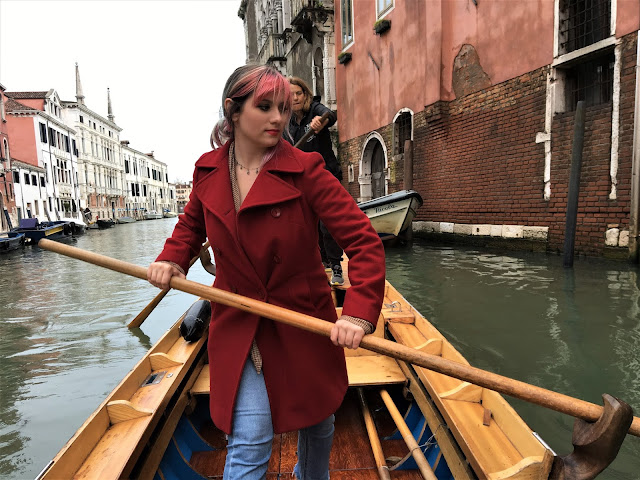 And an expert, she is.
It was remarkable to watch how seamlessly things worked.

My wife managed to snap this photo of us
as we cruised by the house we'd rented for the week. 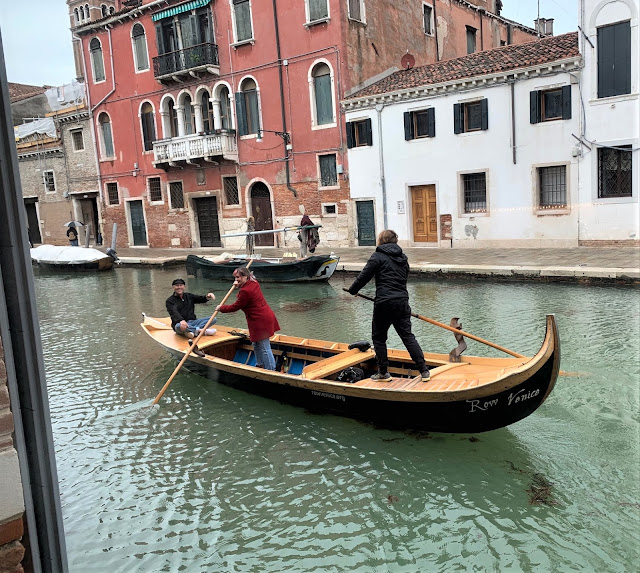 If the boat looks familiar, it should.
Mark Schooling at Gondola Paradiso has one in Oxnard, California.
He liked the boat design so much that he had one built at the Northwestern School of Wooden Boat Building in Washington state.

A "Batela coa de gambero" (translation: shrimp-tailed boat) is a very traditional type of Venetian boat that has become quite rare since motorized boats entered the landscape. Because they're not as long as gondolas, and a bit wider too - they are easier to handle and more stable.

I've rowed Mark's boat in Oxnard several times and can attest the the fact the she's stable and well-suited to taking passengers.
She's also a joy to row.
I can understand why Mark chose the design,
and it makes perfect sense that Row Venice chose batelas for their lessons.
Row Venice currently has four of these beautiful wooden boats in their fleet.

We cruised through the canals of northern of the Cannaregio district.
I realized that the last time my daughter and I were in Venice together was ten years ago, and she took her very first voga-alla-veneta strokes on a GSVVM club boat. 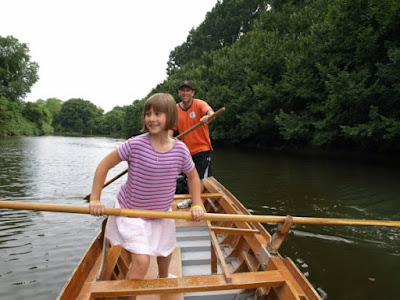 My goodness how she's grown. 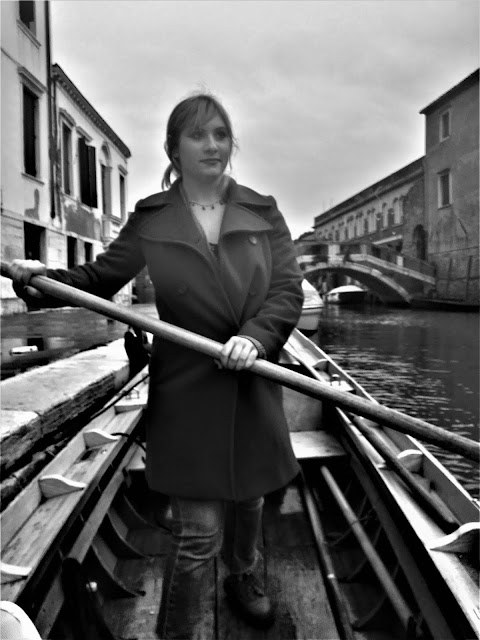 Unfortunately I haven't really fulfilled my fatherly duties as a voga trainer to my family, but it left Jane an open canvas to do her work. 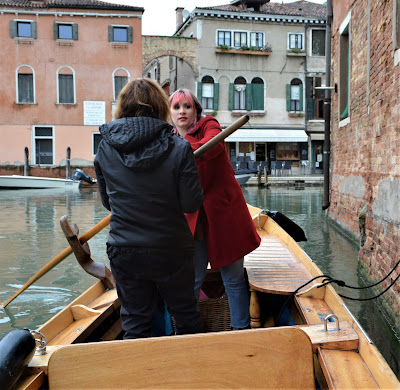 The next step was getting the student up on the back of the boat,
rowing on her own. 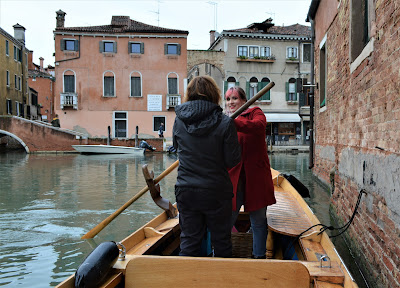 Jane tied the boat up once again, but this time leaving the starboard side exposed, and had Isabella row a-poppa with the boat tethered. 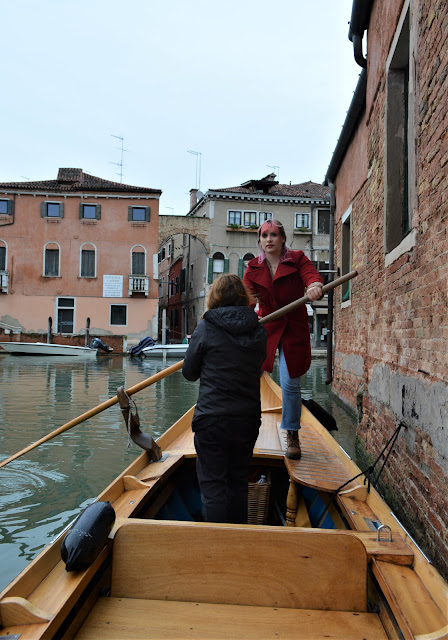 More instruction was given, 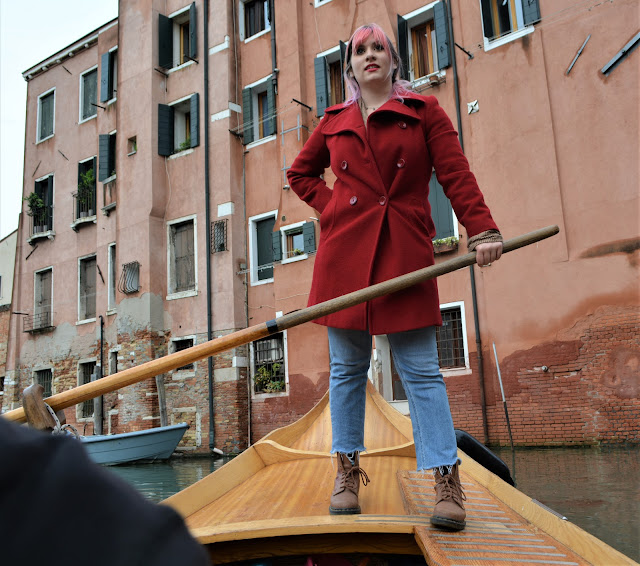 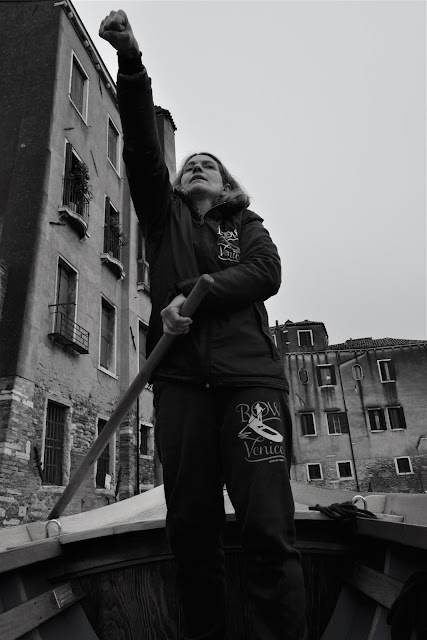 Jane gave a few key pointers,
and her student started to get the hang of it. 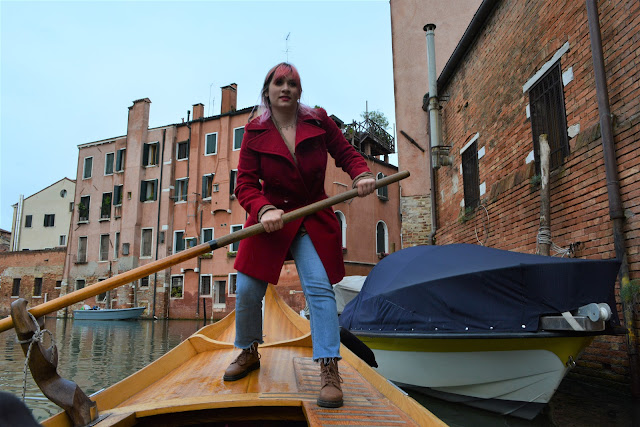 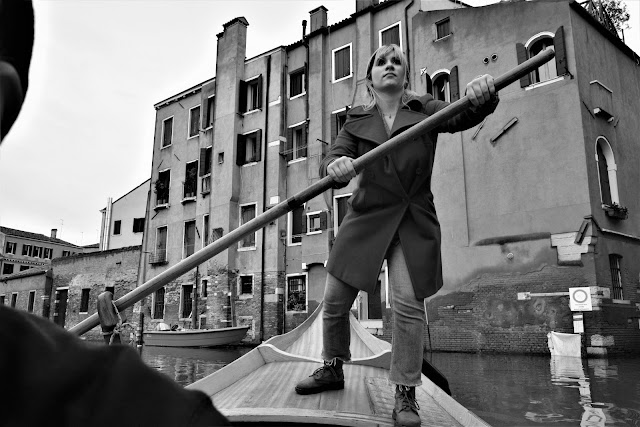 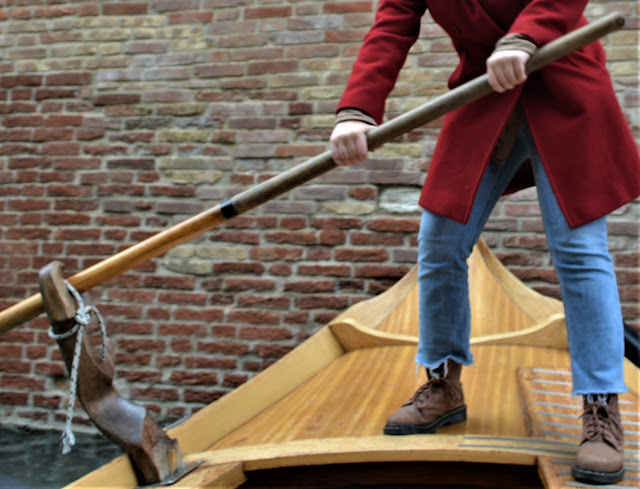 As a dedicated fan of Venice, I cringe when I see hordes of tourists pour out of their cruise ships, follow the lady with the umbrella, and descend upon Piazza San Marco in droves.
To me it's not how such a great city should be experienced,
and yet for many that's their only memory of Venezia.

Row Venice offers the exact opposite.
You travel on foot to a quiet neighborhood that's off the beaten path,
learn to row a boat,
and see Venice from an entirely different (and totally Venetian) angle.
You don't leave with cheap souvenirs made in China.
Instead you bring something much more valuable and enduring:
a great memory of a remarkable experience (and a few great photos too).

Later on, when you see news coming out of Venice about a women's regata, maybe one of the top finishers will be your instructor. 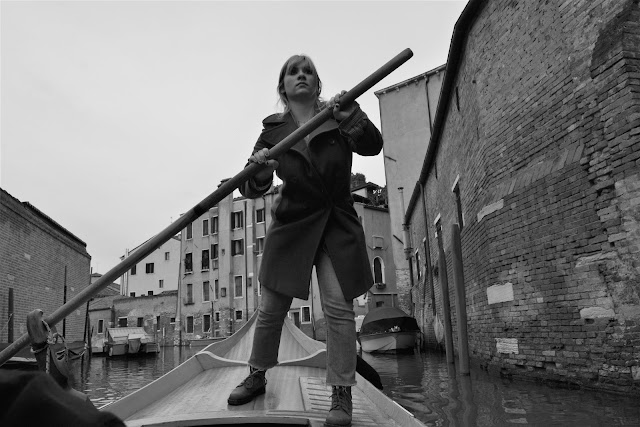