Not Your Average 4th of July Weekend 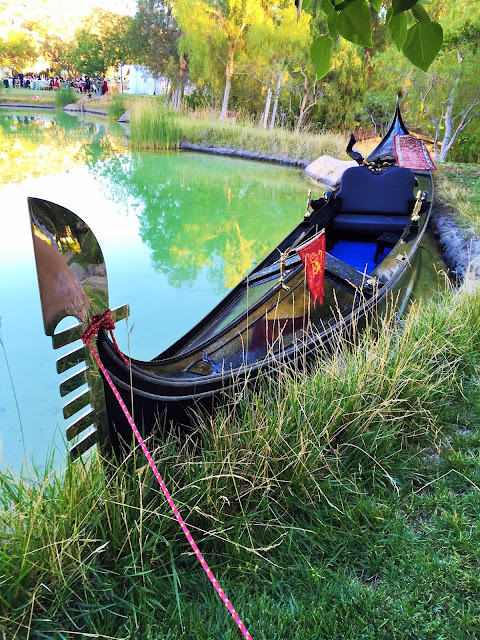 First Call
I got a call a few months ago from a friend in the gondola business,
telling me that there was a wedding client who wanted a boat
for their grand entrance to the reception.
The event was scheduled for July 2nd at a property in Simi Valley,
with a tiny lake - just big enough for a gondola.

We get a lot of inquiries from people wanting us to put gondolas in pools,
ponds, and even water hazards in golf courses.
What follows is a discussion of whether or not it's possible.
Ninety percent of the time the conversation stalls and dies.
Sometimes it's cost, but usually it has to do with the physical challenges or accessibility of the waterway.
At least a half-dozen times I've been hung up on after mentioning that we'd need to take apart a fence or drive over someone's flower bed.

I talked with the couple who were getting married.
They really had their hearts set on having a gondola there.
After a visit to the location, and some discussion with the property owners,
we were able to ink it on the calendar.

I was happy to have my gondola The Phoenix out of the water and due to have fresh paint by then.
She's the best boat in my fleet for adventures such as this:
fully fiberglassed hull, sturdily built, and after the Hudson River expedition I have no doubt in her durability.
I sometimes wonder if Thom Price had any idea of the places she'd go when he built her.

Second Call
A few weeks before the Independence Day weekend,
my office received another call.
This one came from Las Vegas.
It was the office of Siegfried and Roy (yes, the magicians who are famous for working with white tigers and other animals).
They were having a 4th of July party at their house and Mr. Roy wanted to make an entrance by gondola.

This time we weren't talking about a lake, but rather a swimming pool.
But then, as you might imagine, guys like Siegfried and Roy tend to have fairly big pools - in this case: resort-sized.
I received photos of the pool in question, and sure enough, it was huge;
complete with palm tree islands and three bridges.

After determining that the pool was big enough, I shifted gears:
I said "now, we're gonna need to talk about how to get the gondola into the pool, because she'll arrive on a trailer, but most swimming pools don't have launch ramps".
Without hesitation, the lady on the phone said "well, they used to have pet elephants, and they would let them play in the pool...so we do have a ramp"

(there was a pause while I digested what I'd just heard)

I laughed a bit and then began to ask whether the ramp would be
big enough for a boat trailer, but then I caught myself,
realizing that it was elephant-sized!

The timing was perfect.
There was a comfortable amount of time between the two events.
The next three weeks were dedicated to getting everything in order.

Waiting for the Weekend
As a matter of course, I always have one boat out of the water for paint, service, and any repairs necessary.
With two new accounts on the horizon, my right-hand-man Steve Elkins sanded and painted every inch of The Phoenix.
Her stainless steel ferro blade was polished to mirror perfection.
New upholstery was sewn, and a new Deeper Shade of Blue was given to the floorboards.

When we hit the road on the morning of July 2nd, with Simi Valley in our crosshairs, The Phoenix was in show condition.

Hummingbird
The wedding event was at a remarkable property known as Hummingbird Nest Ranch - one of those places you'd never know about unless you were invited to go there (and allowed in the gates).

We arrived just before noon, unloaded all the extra items in the gondola,
and parked the trailer in the agreed upon location - right next to the lake.
The most amazing piece of heavy loading equipment showed up:
a "reach forklift", with forklift array at the end of a telescoping boom.
My blue hoisting straps were looped under the gondola and hooked onto the forks.
We found the perfect strap placement, lifted her off the trailer,
and the reach forklift placed The Phoenix in the water.
The launch was so quick and easy, that we spent twice as much time dressing and primping the boat afterwards. 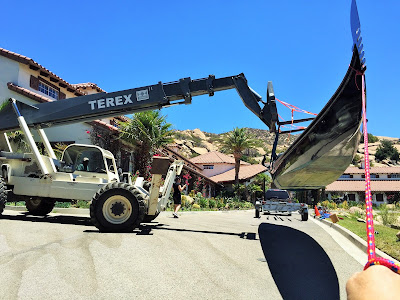 The Phoenix is lifted and the trailer pulled forward. 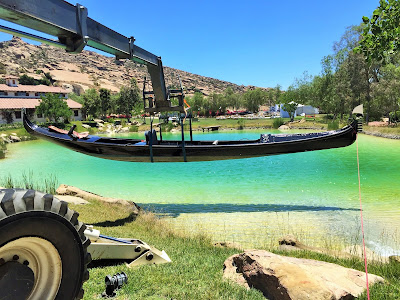 The boom is extended. 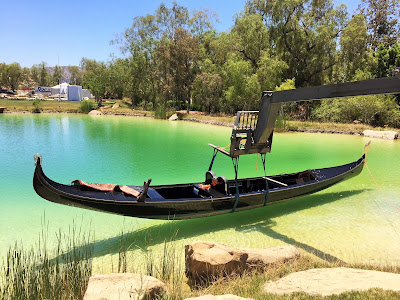 Note to self:
add a reach forklift to my Christmas wish list.

My bride and groom arrived to a picture-perfect boat,
which was fortunate, because they were followed closely by photographers.
Once the newlyweds were on board and seated in The Phoenix,
and clothes, hair, and makeup were primped,
some great memories were made, and photographed. 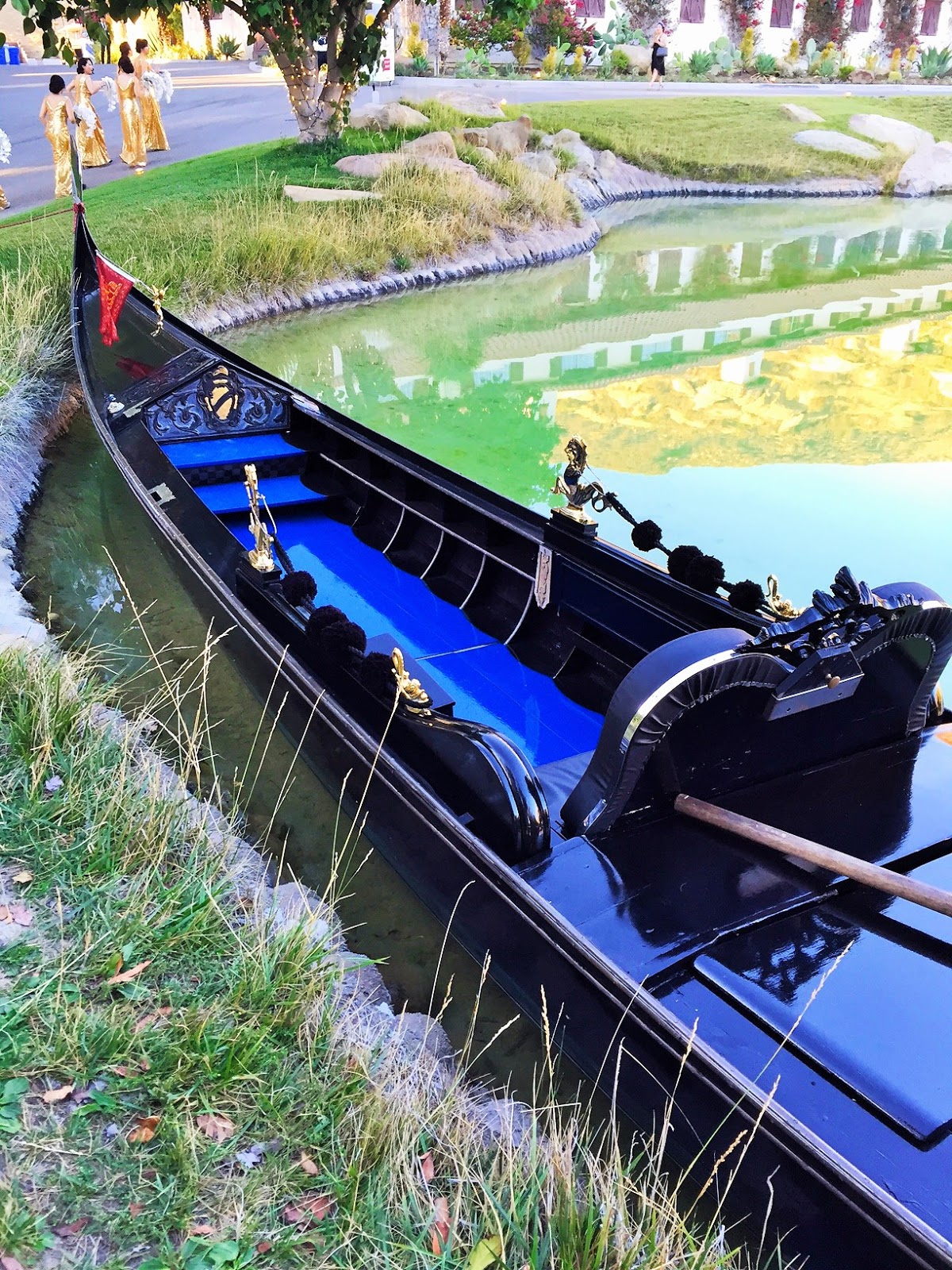 Moments before the bride and groom arrived.
Bridesmaids in gold, floorboards in blue. 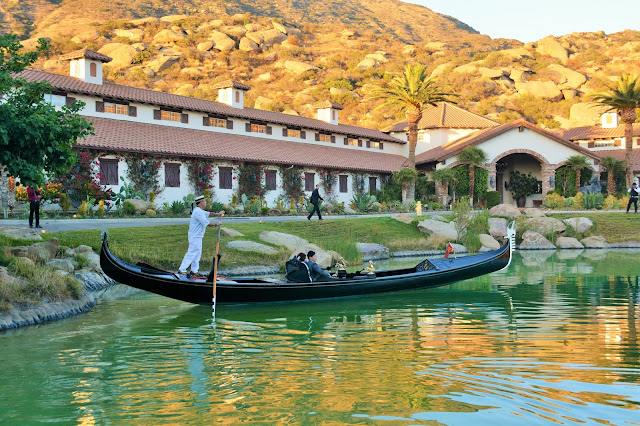 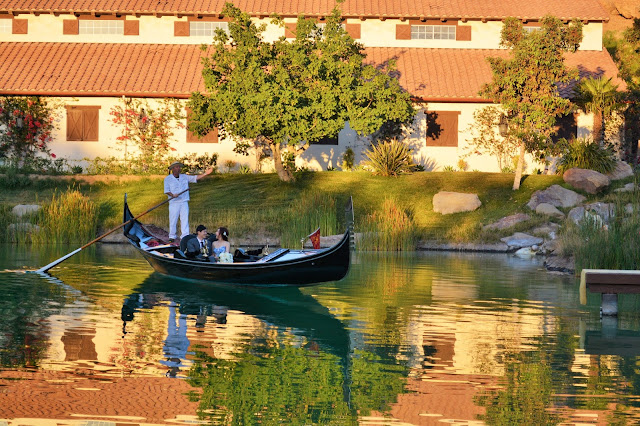 The grand entrance was awesome.
The wedding guests loved it.
The bride and groom loved it even more.
Heck, I had a blast too, and I was paid to be there. 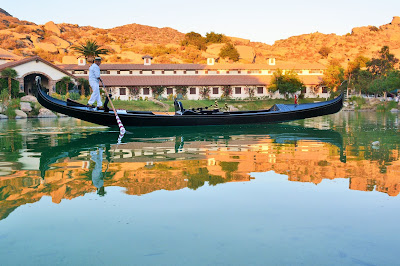 A few more circles before hoisting. 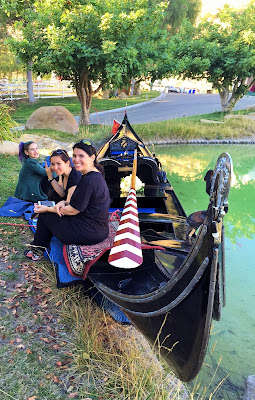 My team of expert gondola handlers.

After the grand entrance I rowed around for a while and then we brought the gondola into position, put the straps in place, and once again The Phoenix was lifted out of the water - this time with me and one of my daughters seated in the boat.
It was awesome, felt like a carnival ride.
I said to my daughter:
"years from now I'll say 'remember when we made The Phoenix fly?'"

Through the Desert
Coffee, snack foods, a gas stop in Barstow.
I struggled to stay awake at times.
We were all living on "sleep debt".
A few times I stopped to "check the straps" just so I could stay awake and break up the monotony of driving through the desert in the dark.
I've driven to Las Vegas more times than I can count, but never that tired.

We got to our destination at a quarter to four in the morning,
unhooked the trailer, and then headed to the hotel.
I finally hit the pillow at 6am.
I don't know about my daughters.  My wife was up til seven,
working on business stuff.

Little Bavaria
11am came way too early.
Even the best hotel room coffee is crap,
but then, it does have caffeine, so who's complaining?

We arrived at Siegrfried and Roy's private residence
(known as "Little Bavaria")
and spent some time getting the boat ready.
In short time I was lining up the trailer and launching the gondola - using a ramp designed for elephants.

In a case of remarkable serendipity,
elephant ramps are the perfect width, height and depth for boat launching.
The Phoenix was afloat, wild waterfowl who call the pool home were getting out of our way, and we managed to get the gondola to fit under one of the three bridges and into the main part of the waterway.

Little Bavaria is one of those places few people know of, and fewer have been to. They've never given tours, and have stated that they never will.
Both performers are originally from Germany,
and you can see it in some of the architecture and such.
It my be called Little Bavaria, but it's anything but little.

Their love for animals shows.  There are all sorts of creatures roaming around.  None of the big cats were onsite though - they can be found, and admired at their habitat in The Mirage (the casino where Siegfried and Roy performed for so many years).

Some practice runs were done, and while the pool is big, so is a full-sized gondola.  Taking time to really get to know the waterway was an important exercise. 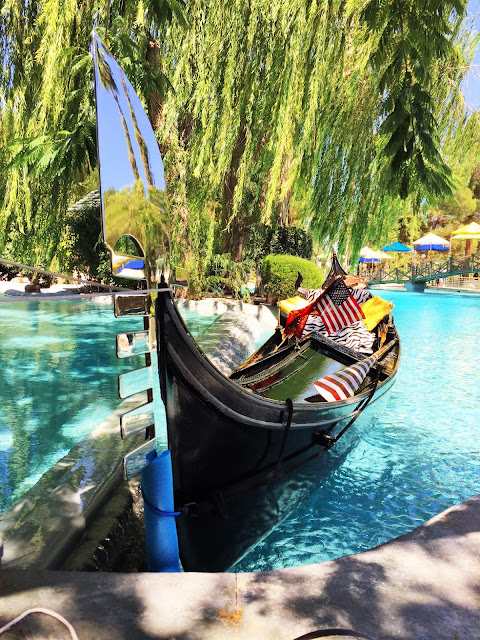 The Phoenix at rest in a private resort-sized pool.

Independence Day
The 4th of July was spent meeting people, prepping the boat, and doing our best to keep things a secret.
We managed to tuck all 36 feet of Phoenix behind some bushes, and only brought her into position right before the grand entrance.

Mr. Roy boarded the gondola, and Mr. Siegfried was escorted over.
His first reaction to seeing a Venetian gondola in the pool was priceless.
He climbed aboard, shaking his head in disbelief.

The DJ changed the music to a new song.
It sounded vaguely familiar.  Soon I could tell that it was the theme song for Siegfried and Roy's show, as the chorus included their name.
I'd never heard the song before, but the reason it sounded so familiar was that it was recorded by Michael Jackson!

Red and blue smoke bombs were lit - filling the air with color.
Michael Jackson's song pumped out of the sound system.
And like it was part of their stage act, the two magicians made their entrance on a gondola that nobody had seen until that moment - when it emerged through red and blue smoke.

A Class Act
After the entrance was finished, and my two famous passengers had gone on to visit with their guests, we were invited to stay and enjoy the party as well.
I had the opportunity to meet and talk with many employees and former assistants to Siegfried and Roy.
Every single person I talked to had nothing but positive things to say about them, and most of the folks I talked to had been working for them for a decade or more.  You never know what someone is really like when you first meet them, and indeed there are lots of famous people who everyone thinks are nice (even though they might not be).
But the two guys that I had on my boat are truly a class act.

Home Again
Hauling was easy, stripping and strapping the boat went without any trouble. Saying goodbye to new friends was the most difficult thing we did that day.
The drive home went well and before my neighbors knew it, there was a gondola parked in front of my house.

After a good, solid, and long night of sleep, The Phoenix went back to her spot in the shipyard.
This week she'll get fresh bottom paint, and then join the rest of the fleet in Newport, with even more stories to tell than she had before.

Eventually I hope some photos or video will become available,
and when they do, I'll post some of them here.

You do have some interesting appointments. The photos are so clear and beautiful.