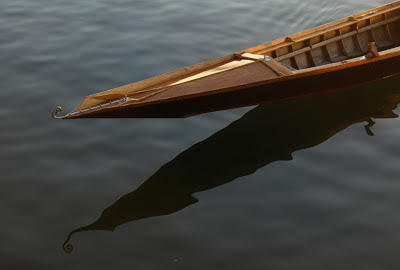 For many years I've admired a certain pupparin docked in Huntington Harbour, often telling owner Tim Reinard that if and when he ever wanted to sell the boat - that he should call me first.
I came close to convincing him about a year and a half ago,
but the timing wasn't right, then, in late November I got the call.
Banking arrangements had to be made, and I had to convince Tim to hang on to the boat until I could make room for her, but a deal was made.
I was thrilled.
Today I met Tim at his docks, we rowed the boat to the ramp,
hauled and secured her, and I followed him and the pupparin
down Pacific Coast Highway to Newport. 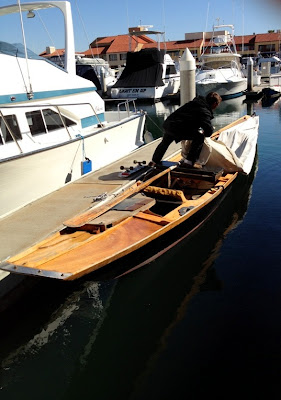 There was another very interesting new boat in the docks - a boat we've talked about here recently.
As the song from the children's tv show goes:
"one of these things is not like the other"
can you pick it out? 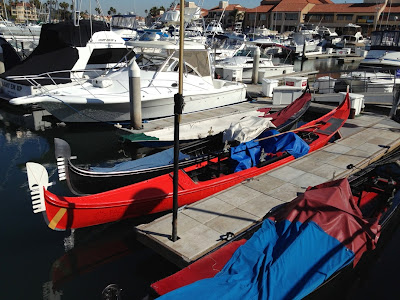 I'll give you a hint, it's not the black one, and it's not the other black one...
Ok, here's another hint, she was mentioned in the Gondola Blog post "Red!".

Tim and I rowed the boat tandem.
It was his last time rowing her in his own harbor,
and he rowed poppa masterfully. 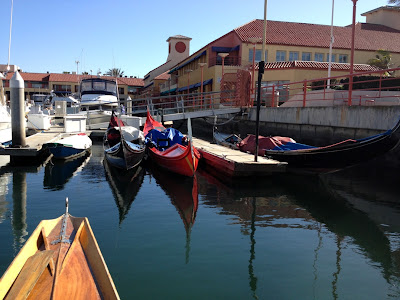 The conditions today were amazing.
I was waiting for the fourth of July to call, asking for it's weather back.

The boat basking in the sunlight, while floating in Huntington Harbour.


You always get funny looks when you trailer a boat like this, and today was no exception.  As I followed Tim, it was comical watching car after car slow down a bit as they were passing him.


Not long after, she was floating on the waters of Newport Harbor,
the sun glistening on her varnished wood, locals taking a closer look. 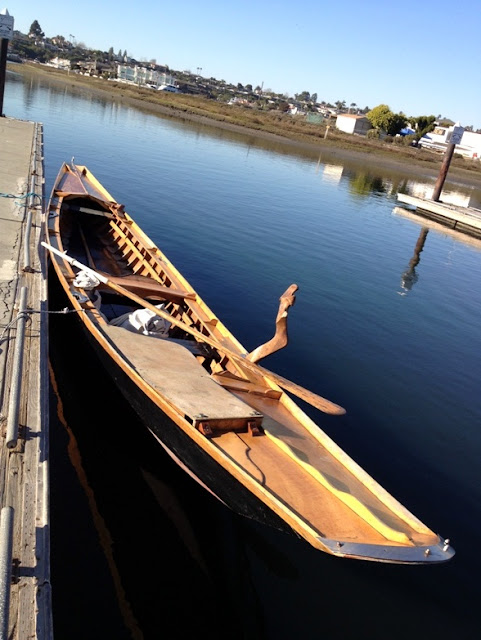 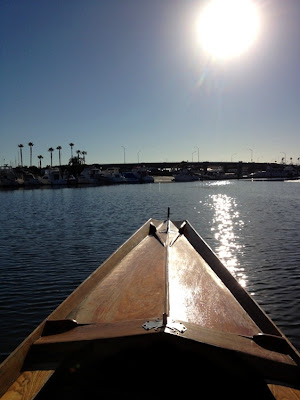 It was a long day, but my work wasn't quite finished.
I had to get some better photos of the boat in her new home.
We were in a race against time as my daughter Cassandra and I hurried back down to the docks, gave the boat a quick primping, and started snapping photos. 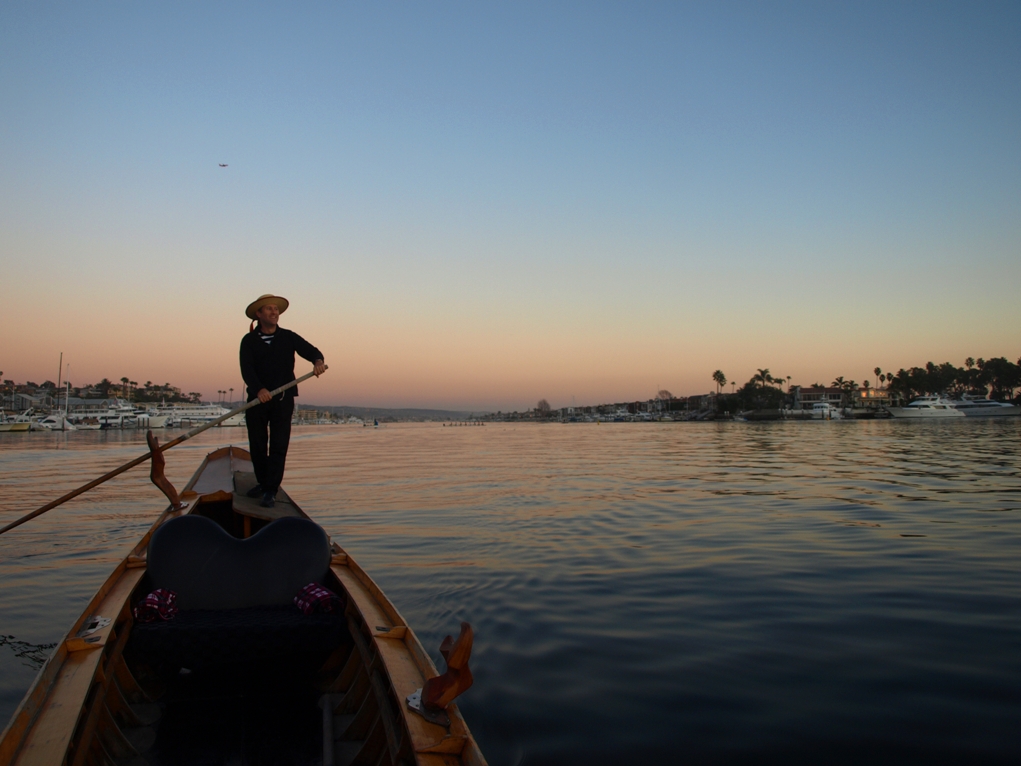 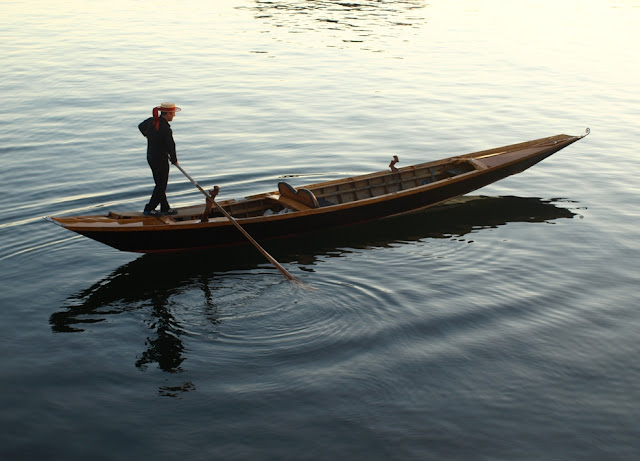 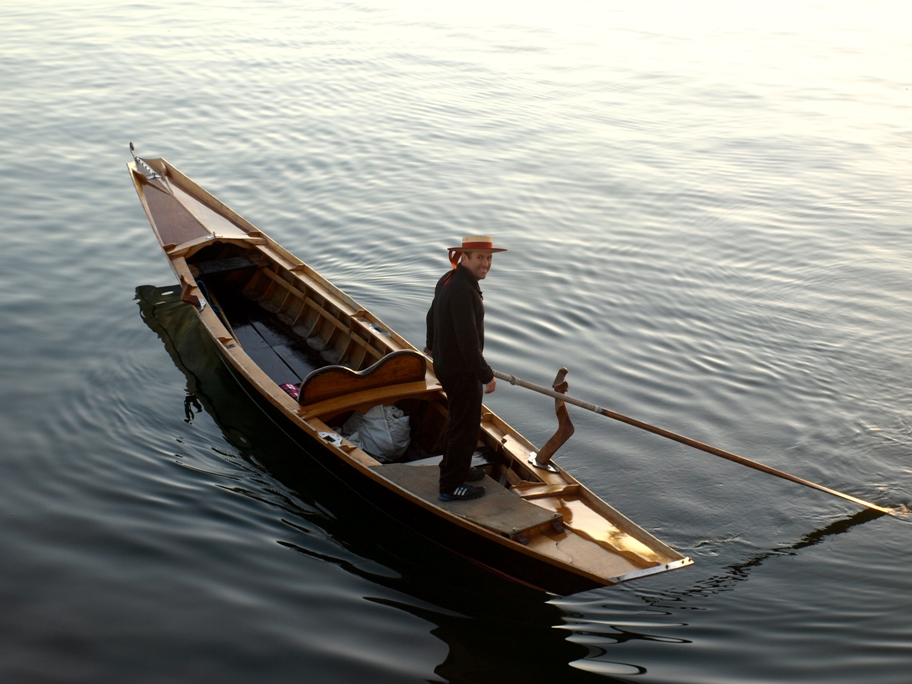 I love this boat; she handles like a little sports car.
Can't wait to take passengers out in her.
Posted by Gondola Greg at 11:00 PM

Beautiful boat Greg. I can only imagine how much fun you'll have with her.

You were towing this beauty boat AND overtaking other motorists on the superhighway? Time is really money over there, USA!

So this boat can be rowed standing in the "cargo hold", as well as from the raised platform? That would help with the more interactive gondolier tasks, i.e. not as distanced.

(Just asking because venetians use sandoli for hire and the pupparin was like a family excursion / sport vehicle for the nobles.)

Greg, Remember when I was driving
125 mph and the whole truck and trailer got airborne? That was rad. USA! USA!

@ Bepi:
Yeah, and I was running interference ahead of you in a black '78 Trans Am with Smokey on the CB. Good times!